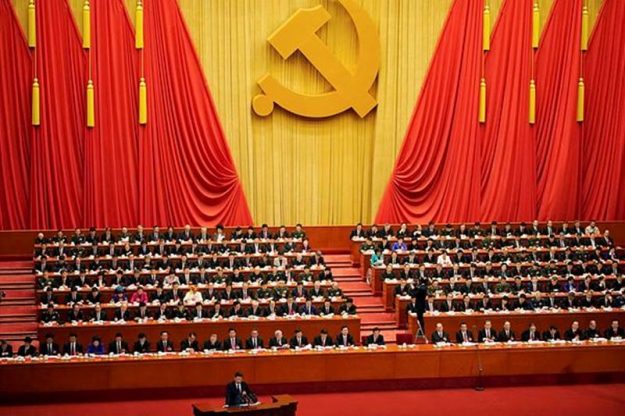 By John Ross, 26 April 2018. Press release reproduced from Xinhua News, 24 April 2018. One of a series of background articles to the Trump’s recent escalation of trade sanctions against China. The Politburo of the Communist Party of China (CPC) just held a study session on the Communist Manifesto. What does this tell us about China?

The Politburo of the Communist Party of China (CPC) just held a study session on the Communist Manifesto – something to think about for those who wrongly think China is a capitalist country. In fact it should come as no surprise to those in the West that Marxism is the ideology of the CPC and that Xi Jinping is a very sophisticated Marxist. China after all never disguised it – it always stated the CPC was a Marxist party. Only rather arrogant Western ‘China experts’ thought they knew better than the CPC itself.

Bill Bishop, who edits the anti-Marxist and anti-CPC, but factually informative ‘Sinocism’, notes on the dawning realisation the CPC is entirely convinced on Marxism:

It matters little whether we foreigners think this talk of Marx and Communist is all just BS… What matters is whether or not Xi believes it. For a long time I have thought he did and have only become more convinced of that over the last couple of years. Yes doubling down on Marxism is a means to an end for the Party, but that does not also mean that Xi himself is not an ardent Marxist whose fervor is only increasing as he sees a world evolving and fracturing.

Put in other terms the CPC is a Marxist Party and China is a socialist and not a capitalist country. Those ‘China experts’ who doubted that, thinking they knew better than the CPC, have just been proved to be wrong.

What is a great pity is that parts of the Western left followed, and were influenced by, Western ‘China experts’ into falsely believing that the CPC had abandoned Marxism and China had become a capitalist and not a socialist country.

The long version of the press release on this study session is below.

The purpose of reviewing The Communist Manifesto is to understand and grasp the power of the truth of Marxism and write a new chapter of socialism with Chinese characteristics in the new era, Xi said Monday when presiding over a group study session of the Political Bureau of the CPC Central Committee.

It’s also for the purpose of firming up Marxist belief and tracing back to the source of theory for a Marxist party to maintain the advanced nature and purity, Xi said.

The ability of the whole Party to solve the practical problems of contemporary China with the basic principles of Marxism should be enhanced.

It’s necessary to “apply the scientific principles and the spirit of The Communist Manifesto to the overall planning of activities related to the great struggle, great project, great cause, and great dream,” he said, calling The Communist Manifesto a monumental work that has a scientific perspective on the development of human society and was written to benefit the people and seek liberation for humanity.

Xi called on the Party to foster stronger confidence in the path, theory, system, and culture of socialism with Chinese characteristics, and adhere to the ideals and convictions of the Communists, to fear no risks and never be confused by any interference.

Xi urged Party members to “stay true to our founding mission,” always put the people in the most prominent place in their hearts, work hard for the people’s interests and happiness, and promote well-rounded human development and all-round social progress.

Xi called for commitment to safeguarding and promoting China’s development interests, and opening wider to the outside world.

Xi stressed that China should push the international community to jointly shoulder the responsibility of the times, and cooperate to respond to challenges brought by economic globalization.

China should make economic globalization more open, inclusive and balanced so that its benefits and opportunities are shared by different countries, social strata and groups of people, said Xi.

To lead the people in the great social revolution and achieve national rejuvenation, the Party must carry forward the spirit of reforming itself, said Xi.

The Party must not waver in its determination, lower the requirement or cut the efforts in ensuring full and strict governance over the Party, Xi said.

Xi noted that the Party must always preserve its character of a Marxist governing party, always remain ahead of the time, and always be the backbone of the Chinese people and the Chinese nation.

Xi urged Party members to solve problems with new ideas, new thinking and new methods, and learn from excellent practices, asking them to increase their understanding of the laws that underlie governance by a Communist party, the development of socialism, and the evolution of human society.

More efforts should be made to develop Marxism in the 21st century and in contemporary China, and write a new chapter of adapting Marxism to the Chinese context, Xi said.

Xi called for efforts to further study and interpret the works of Marxism, popularize them and have them embraced by hundreds of millions of people.