The last time I wrote about the ruble outlook, in early October, I highlighted the oil price trend and the actions of the U.S. Federal Reserve Bank as being the two key drivers of where the currency might trade against the U.S. dollar until the end of the year. At that time the exchange rate of the ruble against the dollar was 40.1 and the price of a barrel of Brent crude was just over $84 per barrel.

Today the price of oil is only 50 cents per barrel lower, but the ruble has fallen by almost 20 percent. At one point last Friday morning the ruble traded at almost 49 against the dollar, at which level it was off 50 percent since the start of the year.

So what’s gone wrong with the economics? The short answer is nothing. It is just that economics are now almost irrelevant. If economics were the only driver, then the ruble would still be trading not far off 40. That is technically the fair value of the currency based on where oil is currently trading and on the key macro indicators for the economy.

Unlike most other countries in the world, Russia has a triple surplus in terms of the federal budget, which equalled 2.1 percent of GDP, or $32 billion, at end-September; a $151 billion trade surplus for the past three quarters and a year-to-date current account surplus of $52 billion compared with only $26 billion this time last year.

The reason why the ruble is trading much weaker than the economics justify is because companies with foreign currency liabilities have started to hoard dollars and euros and, latterly, because of a fear that sanctions may get tougher as the news from eastern Ukraine becomes more dangerous. That combination places the ruble in a different, and much more dangerous, category when it comes to trend forecasting.

It is wrong to blame the Central Bank for the current ruble weakness. As an institution it has handled a very difficult situation relatively well. For sure there are different actions it might have taken and some of its interventions could have been more timely and effective. But these are only obvious with the benefit of hindsight.

The steep oil price move in August and September was not foreseen by many analysts, while sanctions are clearly outside the Central Bank’s control. One strategy that it did adopt, and that has proven to be very effective, was to allow the ruble to free-float against the oil price, which, unlike in 2008 and 2009, has meant that only a modest amount of the country’s financial reserves have been used in a futile effort to control the currency and, critically at a time when the Finance Ministry has few external borrowing options, the federal budget has remained in surplus.

The weaker ruble has also provided a soft stimulus to the domestic manufacturing sector, especially in the food and basic consumer and service sectors, as people switch to cheaper alternatives. The manufacturing sector expanded by 3.6 percent year on year in September and was up 2.3 percent over the past three quarters. That growth has partially compensated for the weaker trend elsewhere, for example, in retail sales and investment, and means that the economy can grow at about 0.5 percent this year. A severe slowdown but no collapse.

The negatives from the weak currency are clear for all to see. Pressure on inflation, which now looks set to reach 9 percent this winter, and an almost full stop in inward investment rank high on the list. But it is the impact on sentiment that is hardest to call.

At a certain point the fear of what might happen can become self-justifying and you end up with a sort of death spiral that can be very difficult to pull out of. That is the immediate challenge facing the Central Bank. Part of the solution will be to slow the volume of bets against the currency and that also will not be easy, especially as the government remains firmly committed to a free float at the end of the year or early next year. The recent 1.5 percent rise in the benchmark key rate, an action that would normally support the currency, only acted as an accelerant in the opposite direction.

A series of larger interventions or one huge intervention must be tempting, but the danger is that this too may have the opposite result if traders sense panic. Very quickly the Central Bank might end up burning through financial reserves at a fast pace. In that event the credit rating agencies, which have already warned that the country’s investment grade rating is at risk, would likely quickly move the rating to junk status. That would open up a whole new world of financial pain for both the state and the corporate sector.

That brings us back to oil and politics. As mentioned, the fact that the price of crude has held around the $84 per barrel level has not provided any support for the ruble since early October. But, while traders are ignoring oil as they attack the currency, a drop in the oil price to below $80 per barrel would provide justification for an even more vigorous attack.

And, of course, it is not just the traders in banks or other financial institutions who are hitting the ruble, it is the mass of ordinary savers and businesses pulling money out of rubles and into other currencies in order to protect wealth and income that is adding to the pressure. They are reacting to the downward momentum and to the increasing concerns that events in Ukraine may worsen and lead to more sanctions.

Ultimately that is the biggest problem for the broader economy and for the ruble. Despite a lot of public bravado and defiance against the actions of Western countries, the accumulated sanctions are starting to bite hard. Especially in the financial sector. The last round of sanctions, which added Sberbank to the list of banks blocked from accessing Western debt and the cut in the short-tern finance limit to 30 days, from 90 days, was a killer.

Where to from here? That is a very tough question to answer right now. If we only had economics and oil to deal with, the answer would be a rally back toward 40 against the dollar. That is irrelevant for now. The answer will partly come from whatever actions the Central Bank next takes in an effort to curb bets against the currency. That is certainly a tightrope walk with dangerous consequences if actions err too much on either side. We can also hope that OPEC ministers, when they meet to review production policy on Nov. 27, can calm market fears about a weaker oil price trend.

In the end it will come down to sentiment, specifically the level of fear that geopolitics will worsen and bring more destructive sanctions. To that extent it is the Kremlin, rather than the Central Bank, that will determine where the ruble ends the year. It is to these people that many a beleaguered expat is also looking as a globally competitive monthly salary of $25,000 only 24 months ago is now worth less than $14,500 net of tax. Ouch. 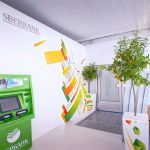 The winners and losers of a weak Russian rubleDigest, Russia
For whom the Wall fell? A balance-sheet of transition to capitalismBackground, Europe - East