Note by New Cold War.org: Before arriving in Ottawa on July 14, Prime Minister Arseniy Yatsenyuk will attend the first-ever ‘U.S.-Ukraine Business Forum’ in Washington DC on July 13. The forum is co-hosted by the U.S. Department of Commerce and U.S. Chamber of Commerce. According to a press release of the U.S. Department of Commerce (text below), the Ukrainian PM has been “invited to participate” at the forum. Yatsenyuk is bringing with him far-reaching proposals by the government in Kyiv to sell hundreds of state-owned enterprises to foreign buyers.

The prime minister of Ukraine will be in Ottawa this week for talks with the Harper government. Arseniy Yatsenyuk is to arrive Tuesday for talks that will focus on the eastern European country’s attempts at economic and government reform [sic]. 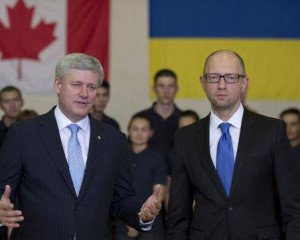 A statement from Prime Minister Stephen Harper’s office says it’s an opportunity to reaffirm the close relationship between the two countries and they intend to “discuss ways to further broaden its scope.”

The last time the two met was in Kyiv just prior to the G-7 Summit in early June when Yatsenyuk asked Harper to press allies for lethal military aid so that Ukraine could turn the tide against Russian-backed separatists in the east.

His visit also comes ahead of an anticipated announcement that Ukraine will default on debts owed to private creditors.

Ukraine faces a different situation than Greece, which has been bailed out by public bodies like the International Monetary Fund and the European Central Bank. Talks about restructuring the debt are underway, but the country faces a July 24 deadline to pay US $120 million to private bond holders, who are now being asked to accept half of what they are owed.

The country’s parliament recently passed legislation that allows the government of President Petro Poroshenko to suspend payments to private foreign creditors while Ukraine’s debt is restructured. If the creditors don’t agree, the government could simply default.

Right now, the country’s debt chews up about 95 per cent of its gross domestic product and many observers, including the IMF, say that is unsustainable.

Unlike Greece, Yatsenyuk has repeatedly signalled the Ukrainian government is committed to reform.

Defence Minister Jason Kenney, the last high-ranking Canadian official to visit Ukraine last month, said he remains optimistic that a default is not on the cards. “We certainly hope that doesn’t happen,” Kenney told The Canadian Press in Calgary during a recent interview. “We’ve assisted Ukraine in stabilizing their monetary situation through the International Monetary Fund. The most important thing for Ukraine is they get their economy growing and that’s why they need stability.”

He noted the Harper government is pursuing a free trade deal with the country and reform is already underway. “We’re getting close with the free trade agreement and frankly it’s why Ukraine needs to fight corruption,” he said. “In the short term, we hope they get through this — unlike Greece, Ukraine is actually making a very serious effort under the current government to bring in reforms. They’re paying a political price for that and they’re also contesting with a war inflicted on them by Russia, so it’s a very challenging situation.”

June 10, 2015–Today, U.S. Secretary of Commerce Penny Pritzker met with Ukrainian Prime Minister Arseniy Yatsenyuk to discuss progress on the implementation of reforms to improve the business and investment climate in Ukraine and further expand U.S.-Ukrainian trade and investment ties.  During the meeting, Secretary Pritzker invited Prime Minister Yatsenyuk to participate [emphasis added] in the U.S.-Ukraine Business Forum, taking place on July 13 in Washington, D.C at the U.S. Chamber of Commerce. The Forum is an opportunity for Ukrainian policymakers to detail the steps they have already taken to strengthen their market and to lay out their vision for Ukraine’s economic future.  U.S. business leaders will also share their perspective on steps that the Ukrainian government needs to take in order to encourage greater private-sector engagement in Ukraine.

“The Obama Administration is committed to supporting and expanding strong economic relations between the U.S. and Ukraine,” said Secretary Pritzker. “The first-ever U.S.-Ukraine Business Forum, co-hosted by the U.S. Department of Commerce and U.S. Chamber of Commerce, is an opportunity for our private sector to hear directly from the Ukrainian government about the progress the country has made toward implementing its robust economic reform agenda. It is also a platform for leaders of U.S. firms to discuss additional reforms that are necessary to improve the business and investment climate in Ukraine. I look forward to joining Prime Minister Yatsenyuk and other senior leaders of Ukraine’s government in Washington next month.”

The Embassy of Ukraine to the United States of America continues its work on the first-ever Ukraine – US Business Summit, taking place on July 13 in Washington, D.C. Prime Minister Arseniy Yatsenyuk will head the Ukrainian governmental delegation. U.S. Secretary of Commerce Penny Pritzker will host this event from American side.

Key elements of the forthcoming Forum were discussed by A.Yatsenyuk and P.Pritzker during the Prime Minister’s recent visit to the United States in June 2015.

At the Forum, the Ukrainian Government will present the steps taken to improve investment and business climate of Ukraine as well as the vision of economic future of our country. U.S. business leaders will share their perspective on immediate actions that should be taken in Ukraine in order to encourage private-sector engagement.

Ukraine – US Business Forum is aimed at fostering trade, economic and investment cooperation between our countries. 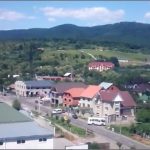 Shootout between police and neo-Nazis in western Ukraine (updated)Digest, Ukraine 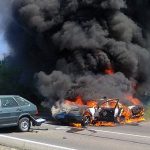 Right Sector vs. the Junta: The events in MukachevoDigest, Ukraine