Update on July 13, 2015: The governor of the Transcapathia Region and the Kyiv Prosecutor’s office say that the Right Sector members who killed a security guard and wounded several policemen and bystanders at Mukachvo, western Ukraine on July 11 have escaped a purported police encirclement. See report further below.

July 30, 2015: The SBU has reportedly opened criminal investigations into seven people involved in the bloodbath at Mukachevo. A detailed report on the clash in Mukachevo from Gazeta.ru on July 11 is translated and published here on Fort Russ. 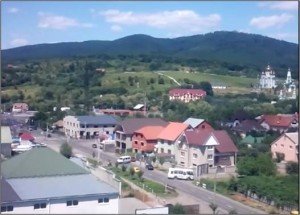 Ukrainian Right Sector militants, surrounded on the outskirts of the town of Mukachevo in western Ukraine after deadly clashes with police, are refusing to lay down their arms without their leader’s orders. Civilians in the area have been evacuated as negotiations so far have failed.

SWAT police and special units of the National Guard as well as Ukraine’s Security Service (SBU) agents have secured the area and blockaded members of Ukraine’s ultra-nationalist Right Sector group. Mukachevo is located 50 km east of where the borders of Ukraine, Hungary and Slovakia meet and 225 km south of the Ukrainian city of Lviv.

“To prevent possible bloodshed, the Security Service and Interior Ministry demand that the illegal armed group lays down [its] arms and surrenders,” the SBU said in a statement, adding that fighters refuse to surrender unless ordered directly by Right Sector (‘Pravy Sektor’) leader Dmitry Yarosh. 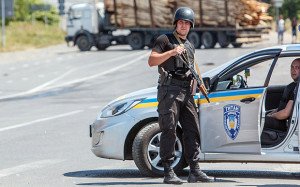 Authorities said they will do everything necessary to disarm and detain the“organized criminal group”, that killed one civilian and injured four more. Six police officers were also injured in the standoff on Saturday afternoon.

As negotiations with the cornered gang failed, security forces on Sunday night began evacuating civilians living in the vicinity of the standoff. “Taking into account the danger for the villagers in the area where the so-called Right Sector militants barricaded themselves, the evacuation of civilians, especially children, is being carried out,” an SBU statement reads. 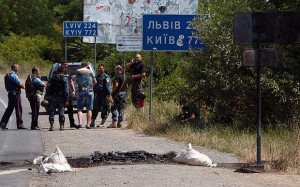 The ultra-nationalists claim they will not go without a fight, according to a spokesperson for the regional prosecutor. He said Dmitry Yarosh was engaged in negotiations with the fighters over the phone.

The spokesperson added that fighters were given a deadline to surrender, Popovich said, however without specifying exact time frame.

During a press conference in Kiev, Right Sector spokesman Artem Skoropadsky said the organization’s leader, Dmitry Yarosh, hasn’t given an order to his fighters to lay down their arms. “Until such an order is given they (the fighters) are not going to surrender or give up their weapons,” Skoropadsky stressed.

The spokesman emphasized that besides the forces involved in the fighting in eastern Ukraine, the Right Sector has around 20 reserve battalions in Lvov, Krivoy Rog and elsewhere in the country.

Those units can be put to use if the Ukrainian authorities decided to make a stand against the radical nationalists, he warned. “The Right Sector is the party of direct action. If they will not hear us, we will have to communicate in other ways,” Skoropadsky said. He threatened that all of the reserve battalions will be sent to “the Presidential administration and the Interior Ministry so that [Interior Minister Arsen] Avakov and President [Petro Poroshenko] could themselves witness the number of people in the Right Sector.”

Skoropadsky said that nothing has changed under Poroshenko’s rule compared to the times of his predecessor Viktor Yanukovich, whom the Right Sector helped oust in February 2014. The current president is to blame for “chaos, murder, corruption, lack of lustration, the return of old Yanukovich era officials, lack of reform and everything that is happening now,” he stressed.

Late Saturday, Right Sector issued a statement saying that two of its fighters had been killed and four other wounded during the initial standoff in Mukachevo. The statement added that “the entire Right Sector military and political movement has been placed on combat alert.” Members of Right Sector have already began mobilizing, with ultra-nationalist crowds rallying in Kiev in front of the President Administration, as well as in Lvov and Dnepropetrovsk.

“Our brothers acted within the framework of necessary defence,” Yarosh wrote on his Facebook page on Sunday, adding that the Right Sector “calls to continue protests for indefinite term until those guilty in the tragedy are arrested.”

According to the group, the culprits are local MP Mikhail Lanyo, one of the negotiators on the Donbass issue from Kiev, Viktor Medvedchuk. The Right Sector is also calling for the resignation of the interior minister, Arsen Avakov.

The violence allegedly erupted as a result of on-going “turf war” between Right Sector members and local MP Mikhail Lanyo, who controls many businesses in the area. Meanwhile the gunmen claimed it was Lyano’s initiative to call them in for “negotiations, ” as he was outraged by the Right Sector’s successful raids to “disrupt contraband routes” he controls.

The extremists organization insists that its people did not provoke the violence and it was the fault of police, who are in bed with the corrupt politician controlling the smuggling channels in the mountainous Carpathian region.

“Members of the Right Sector’s first reserve battalion have been blocking smuggling channels for a long time,” Speaker for the Right Sector Andrey Sharaskin told 112.ua.

Meanwhile the blocked fighters released a video claiming that only 12 of them arrived at the meeting and were greeted by “over 100 armed thugs sent my Lanyo.” According to their version of events, the violence began only after a group “unidentified spetsnaz” charged into the scene while the Right Sector brigade was trying to flee.

Mikhail Lanyo meanwhile claimed he had been meeting with the local Right Sector leader because he had asked for help with arranging accommodation for fighters returning from the “anti-terrorist operation” zone in eastern Ukraine. The MP told Ukrainian channel hromadske.tv that he was not even aware something was wrong, until his aide informed him that the nationalist group waiting outside had “shot a man.”

The Saturday incident which stretched into an uneasy standoff has already been called an “act of terrorism” by Ukrainian authorities. Meanwhile Ukraine’s Foreign Ministry fears the fact that the incident that took place less than 70 km from EU borders may compromise the prospect of visa-free travel between Ukraine and the EU.

“After a real battle by Right Sector virtually on the border with EU,” the Ukrainian authorities are “bearing responsibility for not fulfilling a number of requirements” for the establishment of a visa-free regime with the EU, Ukraine’s Ambassador at Large Dmitry Kuleba wrote on Facebook. “For months we have argued, trying to convince the EU that security risks have been minimized. And we convinced them…”

Meanwhile in Russia, where Right Sector activities are banned and the group is declared extremist, the Russian foreign ministry’s envoy for human rights Konstantin Dolgov said the group has once again “shown its bandit face.”

“Kiev just can’t break up with neo-Nazis, trying to mute them,” Dolgov wrote on Twitter. “Soon it will be too late.”

Read also:
*  Update on July 13, 2015, from Korrespondent.net: The governor of the Transcapathia Region and the Kyiv Prosecutor office say that the Right Sector members, who killed a security guard and wounded several policemen and bystanders, escaped the purported encirclement. The head of the Right Sector refused to order them to surrender and the Ukrainian government instead conducted negotiations with him. This is another illustration of significant power that this far right organization obtained in Ukraine after playing a key part in the violent overthrow of the government, specifically in the Maidan massacre of the protesters and the police. The government is still unable to re-establish its monopoly on violence. The far right has demonstrated again that they have power to violently overthrow the government of Ukraine.

“Mr Yarosh was engaged in direct negotiations with Petro Poroshenko, the Ukrainian president, and the head of the SBU, Ukraine’s interior security service, on Sunday evening. Officials have called on the group to surrender or face arrest…

“But Mustafa Nayyem, a Ukrainian MP and investigative journalist who arrived on the scene on Saturday, said the violence was sparked by dispute over control of the contraband cigarette trade. Citing local residents, Mr Nayyem said ‘all sides in the conflict’ had been involved in a profitable cigarette smuggling business that sees between three and five lorries pass through the region’s border crossings en-route to Germany and Italy each week…”

View:
Live news footage of the firefight in and its aftermath at Mukachevo, southwestern Ukraine, on RT.com, July 12, 2015 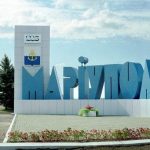 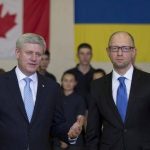