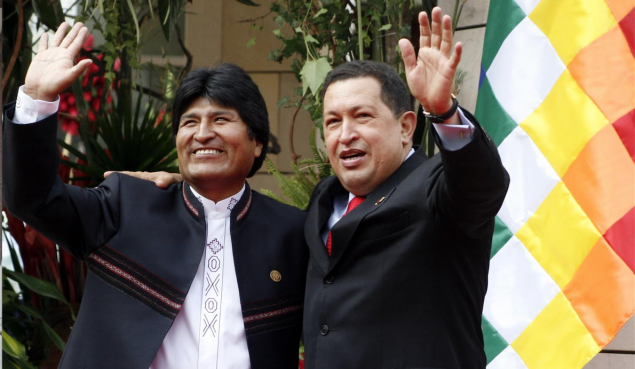 New regime change efforts are underway in Bolivia, this time, bizarrely, aimed at blaming Evo Morales’ leftist government for the fires raging across the Amazon. So far it’s a narrative confined to western funded NGO’s and their contacts in foreign media. However, one should expect an intensification of US intervention and regime change propaganda as the country faces general elections this October…To understand how the US operates in Bolivia, and how they have been defeated, it’s worth looking back on the last major CIA-backed effort to get rid of Morales.

New regime change efforts are underway in Bolivia, this time, bizarrely, aimed at blaming Evo Morales’ leftist government for the fires raging across the Amazon. So far it’s a narrative confined to western funded NGO’s and their contacts in foreign media. However, one should expect an intensification of US intervention and regime change propaganda as the country faces general elections this October.

To understand how the US operates in Bolivia, and how they have been defeated, it’s worth looking back on the last major CIA-backed effort to get rid of Morales. 2008-2009 was the ‘media luna’ coup – a wave of violence by an elite that knew they couldn’t defeat Morales in democratic elections. It was defeated, in no small part, by the role Venezuela played in helping Bolivia overcome the conflict that very nearly spilled into open civil war.

Hugo Chavez, who Morales would refer to as his ‘older brother’, gave huge moral support and organised crucial regional diplomatic backing that kept the US at bay. Bolivia owes much of its peace to Venezuela’s Bolivarian Revolution.

The ‘media luna’ coup was the most serious challenge to Evo Morales’ progressive government, it unleashed huge violence across the country starting in 2008. Wikileaks cables would later show how the US Embassy played a key role in coordinating the opposition during that time, and funding them to the tune of $4million during the months where they were organising racist mobs to carry out attacks on Indigenous campesinos. At the height of the conflict, the government had effectively lost control of almost half the national territory. The movement claimed that their cause was ‘autonomy’ for Bolivia’s different regional departments, with more extremist elements calling for complete secession.

The year Morales took power, he nationalised the country’s natural gas reserves, the demand of the social movements that swept him to power in 2005. Opposition to nationalisation came from the oligarchy in the whiter eastern regions, known as the ‘media luna’ where most of the gas fields are located. These departments where Santa Cruz, Beni, Pando, Tarija, though the violence also reached the city of Sucre.

Right wing politicians, particularly in Santa Cruz, mobilized the existing racist sentiment common amongst the lighter skinned ‘cruceños’, against the Indigenous Andean regions represented by Evo Morales. What followed was an outpouring of racist violence, supposedly in defence of their regional ‘autonomy’ and ‘identity’. In reality these were race riots in defence of transnational and local oligarchies who stood to lose out from nationalisation and the wider process of change.

Senior figures in the media began inciting violence with declarations that Indigenous Bolivians were the “Raza maldita”, “damned race” and that Evo has “the face of a llama”. Morales’ government was told in no uncertain terms by regional authorities and media personalities that they were not allowed to enter those regions, and that their authority is no longer recognised.What started as racially motivated assaults on the streets of Santa Cruz, became more serious with the arrival of a terrorist cell that was working with the leadership of the autonomist movement. The cell had the aim of assassinating Evo Morales, and was led by Eduardo Rozsa, a veteran of the neo-nazi “Zenga unit” militia who had taken part in ethnic cleansing during the Balkans war. Other members included Tibor Révész, founder of the The Szekely Legion, a fascist paramilitary group in Hungary. After establishing contact with leaders of the autonomy movement, they set up training camps outside the city, and acquired an arsenal of deadly weapons. The foiling of their terror plot became one of the more dramatic episodes of the period. But hate crimes and violence would go on to extend far beyond the region.

The city of Sucre was also host to horrific racial violence from the opposition. When Morales was supposed to arrive in Sucre in May 2008 for an official ceremony, middle class groups coalesced around the ‘Interinstitutional Committee’, kidnapped 20 Campesinos who had arrived from surrounding villages to greet Morales. The kidnapped Indigenous campesinos were beaten and then taken to the city’s central plaza, stripped half naked and forced to kneel and condemn the government that they had come to support. All whilst oppositionists were burning the Indigenous whipala flag, and forcing the campesinos to kiss their regional one.

The government was desperate to resolve the crisis and thought that a national recall referendum could be a democratic route out of the conflict. A simple referendum, whereby if a majority voted confidence in the government, then the Movement For Socialism (MAS) would have a new mandate to implement the progressive change they were elected for. If they lost, then they would resign from government and call new elections.

Morales won with a landslide – 67% nationally voted confidence in the government. But the opposition refused to recognise the results. In response, the regional authorities in Beni, Pando, Santa Cruz and Tarija (covering the entire eastern half of the country) launched a coup attempt. They seized government buildings and airports, and announced that they no longer recognised the authority of the central state in their regions.

It was during this phase of the coup that Bolivia saw its worst violence since the October massacre in El Alto, under the Goni-Carlos Mesa regime in 2003. The ‘media luna’ coup would produce its first large scale killings, the ‘Massacre of Porvenir’.

During the coup, authorities in the department of Pando had organised far-right groups to occupy national government buildings, among them the National Agrarian Reform Institute. Campesinos supportive of Evo Morales were concerned that land titles, distributed to them under Morales’ 2006 land reform, would be burnt. They organised a march on the capital of Pando, Cobija. Before they could reach the city, the regional prefect, oppositionist Leopoldo Fernandez (one of the region’s largest landowners), ordered local forces under his command to fire on protesters. 15 campesinos were murdered.

The extreme violence hadn’t seemed to faze the US Embassy, who saw in the autonomy movement, a chance to cripple Morales. His popularity made it impossible to topple the government entirely, but funding violent regional groups could certainly help make those areas ungovernable, and possibly break the territorial integrity of the country. Balkanization, splitting Bolivia into smaller and smaller units would make it all the easier to manage from Washington.

Nor does it seem to have fazed Bolivia’s opposition. Leopoldo Fernandez is regularly hosted, from his prison cell, by the country’s most high profile ‘journalists’, from Amalia Pando to Carlos Valverde, where his jailing is argued to have been an injustice, even being described as a ‘political prisoner’.

Had Bolivia been isolated during those months then foreign policy talking-heads in Washington may well have begun to construct a narrative of ‘chaos and authoritarianism’ to prepare the way for full intervention, beyond the huge sums of cash that they were funnelling to the extremist groups. Though, Bolivia’s primary concern was that the coup would result in the disintegration of the country, and by default, the privatization of huge gas reserves.

However, Venezuela came to Bolivia’s aid. It was Chavez that brought together the governments of Latin America to condemn the opposition violence at Latin America’s regional bodies. The Union of South American Nations (UNASUR) eventually passed a motion backing Morales and agreeing that any breakaway ‘states’ would not be recognised. This was crucial because it was arguably a signal to the US that they would not be able to intervene and escalate the conflict – the region would reject them. It also ensured that the opposition felt isolated on the international stage. Lack of moral support and inspiration from abroad was certainly a factor in the movement eventually fizzling out.

Chavez also put Venezuela’s formidable intelligence services at the service of Morales’ government. SEBIN agents helped Bolivia’s security services to profile and monitor the extremists mobs and terrorist groups that formed the ‘media luna’ movement at the time. No doubt that the intelligence provided was crucial in helping the government to understand the different groups, and better negotiate with them, eventually leading to the government being able to split them off from each other, isolating the most radical ones.

However, most important of all, Chavez provided vital moral support to ensure Evo Morales and the government maintained their conviction to see victory through. In a famous speech to his supporters, Chavez announced the expulsion of the US ambassador in Caracas, in solidarity with Bolivia. Bolivia had also just expelled their US ambassador, Philip Goldberg, for his role in fuelling the conflict.

Once again, it sent a signal that the US cannot simply intervene in Bolivia at will, they would also have to face Bolivia’s ally, already willing to take concrete action. That speech in Puerto Cabello became famous because it produced one of Chavez’ most memorable lines;

“Go to hell f*cking yankees…here is a dignified people, here are the children of Bolivar, of Guaicaipuro, of Tupac Amaru, and we’re determined to be free.”

Since the coup attempt of 2008/9 was defeated, Bolivia has been able to flourish. It’s the fastest growing economy in the region, with rapidly falling poverty and inequality. The peace Bolivia has enjoyed since the 2008/9 conflict is thanks in large part to the firm line Hugo Chavez took to stop foreign intervention and help defeat the wave of far-right violence.

Indeed, it’s one of the reasons the US has been so keen to defeat the Bolivarian government, it’s not purely a question of oil. It’s also the internationalist role Venezuela has played, taking the lead in organising forums and organisations for Latin American integration, such as UNASUR and ALBA, that are independent of the US. Today, the Bolivarian project that represents sovereignty in Latin America, is facing its most testing attacks. Nevertheless, Bolivia stands out as one of the countries that has stood most solidly in defence of the revolution, just as Venezuela stood with Bolivia a decade ago.