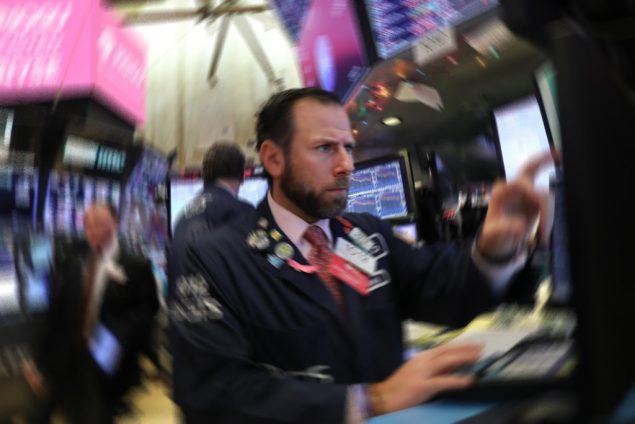 That feeling when all the numbers are so bad!CreditCreditPhoto illustration by The New York Times; Spencer Platt/Getty Images (stock trader)

Everyone’s been talking about REPO and although some are saying there is nothing to worry about — for example on Friday an article in the WSJ said Rest Easy: The Fed Isn’t Losing Control of Money Markets (paywall) — others are describing what’s happening as a crunch, a crisis, or chaos. Is Yanis Varoufakis right when he says that “the omens are clear and ominous” and that this is “the 2008 crisis that never went away morphed into something even uglier”?

Here, we present some of of the articles and opinions that have been doing the rounds on Twitter over the last seven days.

First the US yield curve inverted & $18 trillion of debt fell into -ve yields. Now we are in the 3rd day of a REPO crunch. The omens are clear & ominous: The 2008 crisis, that never went away, is morphing into something even uglier. Meanwhile, for the EU it is…business as usual

Will stress in the repo market abate?

An abnormal bout of stress in one of the most vital sources of short-term funding for banks, which sparked concern across financial markets last week, will continue to be in sharp focus this week.

The New York branch of the U.S. Federal Reserve will step in and offer billions more in liquidity to gummed-up intrabank lending markets Wednesday, following the first intervention in more than a decade only yesterday, as a worrying spike in overnight borrowing costs continues to perplex investors and complicate today’s Fed rate decision.

“Never waste the opportunity offered by a good crisis,” is a quote first attributed to the Italian Renaissance writer Niccolo Machiavelli and repeated by politicians the world over ever since. It also became a main theme for fund managers this week as chaos roiled money markets, sending short-term interest rates surging.

It sounds crazy: even National Public Radio is talking about repo rates. In normal times, not even Wall Street thinks too much about the arcana of short-term money markets. But over the past week, the Federal Reserve has had to work unusually hard to rein in a key policy rate after overnight repo lending dried up. Suddenly, everyone is asking the same question: what does it mean?

Wall Street is Buzzing About REPO rates. Here’s Why

The repo market channels more than $1 trillion in funds through Wall Street … And on Thursday, for the third time this week, the Fed pumped…

Fed Admits Failure of ‘Plan A’ to Control Money Market Rates, Shifts Back to Repos (which was ‘Plan A’ till 2008)

The hullabaloo in the repo market torpedoed the function of Interest on Excess Reserves and forced the Fed to go back to the future.

As the Fed was meeting to consider cutting interest rates, it lost control of the very benchmark rate that it manages. It’s been a rough week in the overnight funding market, where interest rates temporarily spiked to as high as 10% for some transactions Monday and Tuesday. The market is considered the basic plumbing for financial markets, where banks who have a short-term need for cash come to fund themselves.

A crack just emerged in the financial markets: The NY Fed spends $53 billion to rescue the overnight lending market

Borrowing rates skyrocketed on Tuesday in a corner of the markets the public rarely notices but that is critical to the functioning of the global financial system.

Chaos in short-term funding markets this week led the Federal Reserve to step in with a series of overnight rescue operations to help keep credit flowing through the financial system.

Late last Friday, we warned that a “dollar funding storm” is set to make landfall in the US amid a series of converging sources of pressure that we said would result in “secured funding markets breaking higher.”

Wild swings this week in U.S. money markets have raised fresh concerns about whether the New York Federal Reserve under John Williams has lost its deft touch with markets.

The repo spike is not liquidity crisis; it is a crisis for Fed’s floor system

The US overnight repo rate shot up to as high as 10% on Tuesday, prompting the NY Fed to stepped in and rolled out a USD 75 billion repo operation, or temporary open market operation, which in the end injected USD 53 billion cash into the short term money market.

Editors’ Note: We don’t necessarily share the views we publish on New Cold War; however, we do attempt to provide readers with a range of views, because your right to make your own mind up depends on being fully informed.