Media portrays Nemtsov as “The driving force of Russia’s opposition movement”, but his approval rating was near 1%

Boris Nemtsov was a victim of a terrible murder. But he was not a “driving force” behind Russia’s opposition . 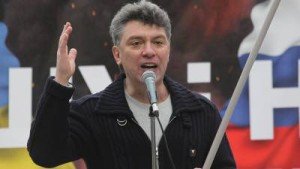 Media reports about Boris Nemtsov’s place in Russian politics are as puzzling as the bizarre and tragic circumstances of his murder. Anna Nemtsova’s (no relation to the deceased) piece for The Daily Beast is probably the worse we’ve seen yet. Her headline, ‘Boris Nemtsov, Heart of Russia’s Opposition, Gunned Down in Moscow’, gives the impression that Nemtsov was, well, the heart of Russia’s opposition. He wasn’t, and to claim he was is silly.

A poll from last year shows that only 45% of Russians even recognized Nemtsov’s name; of those 45%, only 1% “trusted” him—compared to 17%, who said they did not trust him.

But this didn’t stop Nemtsova from writing that he was “the driving force of Russia’s opposition movement”. He really, really wasn’t. (But the motive behind claiming he was is fairly obvious.) After all, why would Czar Putin “remove” a politician that less than 50% of Russians had even heard of? That won’t sell newspapers!

Nemtsov’s strong, tall body was sprawled on the ground under the falling rain with the Kremlin towers in the background. The scene became symbolic of Russia’s modern history.

Also from Russia Insider: Irina Khakamada, a prominent opposition figure who co-founded a liberal party with Nemtsov, blamed a climate of intimidation and warned that the murder could herald a dangerous destabilization.

“It’s a provocation that is clearly not in Putin’s interests, it’s aimed at rocking the situation,” she said in remarks carried by RIA Novosti news agency.