RT looks back on the life of the politician Boris Nemtsov, who was killed in Moscow late on Friday in an apparent hired killing. A veteran Russian politician, he went from being a top reformist to a prominent opposition figure.

The killing of Boris Nemtsov just next to the Kremlin came as a shock to Russia, with many people from various political camps condemning the crime and demanding a swift and thorough investigation. 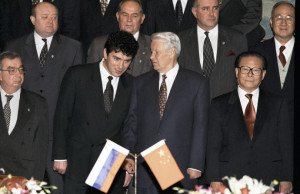 “Boris’ death is a tragedy for my family and me,” tweeted Mikhail Khodorkovsky, the Russian opposition figure arguably known best outside of the country. “We all love him. A reckless, but good fellow.”

“It’s a tragedy. I didn’t agree with him on some things. That’s my right. But what happened, for whatever reason, cannot be justified. I condole,” said Leonid Roshal, a prominent Russian doctor and public figure.

Irina Khakamada, a one-time political ally of Nemtsov’s, wrote that the killing was “an outrageous provocation that crosses the line. On the eve of the protest march. It’s like terrorism.”.

Nemtsov was born in the southern Russian city of Sochi into the family of a construction official and a pediatrician on October 9, 1959. His family moved to the city of Gorky (now renamed Nizhniy Novgorod) while Nemtsov was still a boy.

He studied physics at a Gorky university under his maternal uncle Vilen Eidman, and later worked as a post-graduate student. Nemtsov published more than 60 scientific papers on quantum physics, thermodynamics and acoustics, with academic colleagues describing him as a gifted scientist.

In the last years of the Soviet Union, Nemtsov pursued a political career as an elected member of parliament. During the early 1990s, he was appointed by President Boris Yeltsin as the governor of Nizhniy Novgorod region. He won the first-ever election as the region’s head in 1995.

During his term, he championed sweeping liberalization, including a pioneering land reform that allowed sale of land in the region. He is also credited for creating unprecedentedly free environment for the media in the region, although critics said it was part of his populist policies and that in the actual governing Nemtsov showed authoritarian trends.

In 1997, Nemtsov’s political career brought him to Moscow, where he served as Energy Minister and later Deputy Prime Minister of Russia. At the time Russia was undergoing a period of political and economic turbulence, with five cabinet reshuffles in a period of just two years. Nemtsov served in two of them, but eventually resigned in 1998.

At the time of his appointment, he was considered a popular politician with a chance of winning the presidency one day. His public image however suffered from association with the government of Sergey Kirienko, which led Russia into the default of 1998.

Nemtsov was also marred by a scandal involving his donor and protegee, Boris Brevnov, who received a management position in Russian energy monopolist RAO UES. He was later accused by the financial watchdog of wasting the indebted company’s money on jet flights for his family and other extravagant spending.

After leaving the government Nemtsov focused on party-building. In 1999 he co-founded the Union of Right Forces (SPS), a rightist political coalition, along with Anatoly Chubais and Irina Khakamada. In the parliamentary election that year, SPS scored 8.52 percent of votes and formed an opposition faction. It was the only electoral success of SPS at the national level, with the bloc failing to pass the 5 percent threshold necessary to win parliamentary seats in 2003 and 2007. SPS was disbanded in 2008.

In November 1999, Nemtsov joined other Russian liberals in supporting Vladimir Putin for the presidency, calling him the most worthy candidate for the position. Later he said he regretted that decision and that he didn’t vote for Putin at the 2000 presidential election.

Arguably the most controversial episode of Nemtsov’s political career came in October 2002 during the terrorist attack at a Moscow theater. His name was on the list of people whom the hostage-takers agreed to talk to directly. His fellow SPS politician, Irina Khakamada, went into the besieged theater, but Nemtsov “vanished,” according to Iosif Kobzon, another negotiator. Years later the politician claimed that he received a direct order from Putin not to go.

In recent years, Nemtsov remained a vocal critic of Putin’s leadership, publishing since 2008 no less than four searing reports on what he called Putin’s failures and misdeeds as a public official. Another report focused on the Sochi Olympic Games, its cost and alleged corruption in the project.

He also penned three autobiographical books, with the best-known called “A rebel’s confession.”

While Nemtsov himself blamed his dwindling public support on persecution from the Russian government, some analysts say this was an overly simplistic view. His name is tied in the eyes of many Russians with the painful liberal reforms of the 1990s and the social injustices they brought about. Many of his public statements are at odds with the general Russian public, the latest being his criticism of Crimea’s move to reunite with Russia.

He was also reportedly a difficult political ally, having an uncompromising and somewhat prima donna-like attitude to fellow opposition leaders and activists.

Nemtsov’s latest electoral efforts were largely unsuccessful. He ran mayor of Sochi in 2013, just as the city was preparing to host the Olympic Games, and scored 13.6 percent of the popular vote, losing the race. In the same year, he became the sole member of the regional parliament of the Yaroslavl Region from his latest political party, RPR-PARNAS.

Nemtsov allegedly struggled with severe depression during the last few months of his life, according to Meduza, a Russian news website. There are reports that he didn’t feel like being a member of a regional parliament matched his skill set, while at the same time understanding that he couldn’t regain prominence on a national level.

One of his latest ventures was the organization of the Vesna (“Spring”) opposition rally planned for March 1 in Moscow. Organizers said they canceled the demonstration due to Nemtsov’s death and that a mourning march will be held instead in the center of Moscow.

Nemtsov is survived by his estranged wife Raisa, with whom he had a daughter. He had longtime relationships with two other women, who bore him three children.