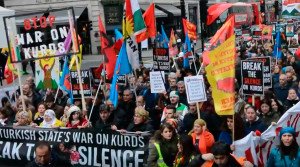 Thousands of protesters have taken to the streets of Britain’s capital to express their indignation with the Ankara’s military operation against the Kurdistan Workers’ Party (PKK) which heaps suffering on the Kurdish minority both in Turkey and beyond its borders.

The protest, organized by an activist group known as Stop War on Kurds, took place in central London on Sunday, March 7. People gathered at BBC Broadcasting House and then left for Trafalgar Square to start the rally. The crowd was a mixture of both Kurds and non-Kurdish supporters.

View: ‘Stop Turkey’s war on the Kurds‘, four-minute video of March 6, 2016 march in London, video by Husain Akhtar (and see screen below). And see the news report below from The Canary.

People carried banners reading ‘Stop Turkish State’s War on Kurds’, ‘Break the Silence on Kurds’, and ‘ISIS Made in Turkey’.

The protest action was triggered by the Turkish crackdown on the Kurdish minority which participants said goes “unreported in the UK press.” The group is “demanding the UK govt puts pressure on Turkey to stop these attacks,” a statement on the Stop War on Kurds Facebook page said.

Protesters also called for the UK government to criminalize the Kurdish Liberation Movement since it “creates serious barriers and difficulties in the search for a peaceful, political settlement.”

The action was called by the Kurdistan National Congress in the UK, the Peace in Kurdistan and London Kurdish Solidarity movements.

The Kurds are Turkey’s largest ethnic minority group, inhabiting its eastern and southeastern territories, known as Northern Kurdistan. However, they are stateless.

The Turkish government is currently conducting a military campaign against the Kurdistan Workers’ Party (PKK) [sic] which has been struggling for autonomy since 1984 and is considered a terrorist organization by Ankara. Last August, blaming PPK for a series of terror acts in Turkey, Ankara launched a military ground operation, which ended a two-year truce with the Kurdish militants.

Since the start of the security forces operation, Turkish troops have imposed dozens of curfews in Kurdish regions, disrupting the lives of some 1.4 million people, the Human Rights Foundation of Turkey (HRFT) said. According to human rights groups, battles in Turkey’s southeast have already claimed around 200 [sic] civilian lives. [See: Hundreds of bodies ‘on hold’ in clash-hit Turkish city of Cizre, Hurriyet Daily News, March 4, 2016; and Turkey: City of Cizre is a big cemetery, BBC Turkish, March 4, 2016.]

At the same time Turkish forces have been shelling Kurdish People’s Protection Units (YPG) across the border in Syria, which Ankara considers a terrorist organization with close ties to PPK, since mid-February.

The bombings of YPG targets, the military wing of the Democratic Union Party (PYD), have been underway despite even the US, Ankara’s ally, viewing the Kurdish fighters as a vital partner in fighting Islamic State (IS, formerly ISIS/ISIL) in Syria.

Published on The Canary, March 7, 2016  (with extensive photos and reporting on Twitter)

On 6 March, over 10,000 people hit the streets of central London to join the first national demonstration in the UK organised by the activist group Stop War on Kurds. But although protesters gathered at the BBC’s headquarters, the public service broadcaster was suspiciously silent about the march.

The protest was organised to condemn the Turkish state’s military assault on Kurdish communities in both Turkey and Syria in recent months. The Canary spoke to civilians affected by the war in late February, looking in particular at the actions of Turkish authorities in the town of Cizre. Since that article, the assault on this town has eased. But the aftermath has revealed scenes reminiscent of the Bosnian genocide in the 1990s.

[Go to the weblink above for the remainder of this extensive report.]

Click on screen for ‘Stop Turkey’s war on the Kurds‘, four-minute video of March 6, 2016 march in London, video by Husain Akhtar 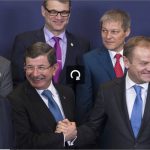 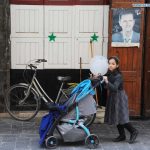 Ceasefire is an opportunity for Syria and for the worldMedia critique, Multipolarity, Roger Annis, Ukraine