Warsaw–Call it the Polish paradox. As voters head to the ballot box on Sunday to pick a new parliament, the mood is decidedly at odds with the facts. 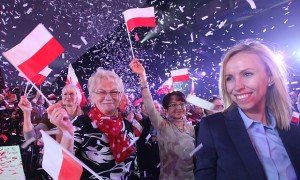 Supporters of conservative Law and Justice party at a rally in Warsaw Oct 2015 (Czarek Sokolowski, AP)

The country has taken in few refugees during Europe’s year of desperate migration – yet the campaign is marked by introspection and xenophobia (“migrants carry very dangerous diseases,” said the head of the frontrunner rightwing party last week).

The Polish economy is one of Europe’s most robust – but the talk is of mismanagement, tax avoidance and surrender to Germany. Poland should be a confident, big European player but it appears mired in fear, recrimination and an almost pathological antipathy to the idea of change.

“They are not talking about the issues that matter,” said one voter, Janina Zurowska-Filipek, a fruit and veg seller from Warsaw. “They are promoting fear of immigrants when, in fact, migrants are not going to come to Poland. They want to go to rich countries.”

“We have reached the limit of our capacity to absorb changes,’’ said Jacek Kucharczyk, director of the Institute of Public Affairs. “We are about to give the country to a bunch of political extremists who have been smart enough to send consoling signals to people who are scared. We are going through a kind of counter-Reformation.”

The Guardian: Polish elections 2015: a guide to the parties, polls and electoral system

By “extremists” he means the Law and Justice party of Andrzej Duda, who won a presidential vote five months ago. Law and Justice may need a partner to form a government but according to the latest surveys, his party will finish at least 10% ahead of the governing centrist Civic Platform.

The socialists of the newly formed United Left coalition may struggle to reach the 8% threshold needed by a political grouping to enter the Sejm (parliament) and senate.

Poland’s trepidation jars with its economic success. Since joining the European Union in 2004, it has become a textbook example of the economic advantages of tearing down borders and opening markets. Having kept its currency the zloty, Poland sailed through the euro crisis. Investors poured in. Poland is the EU’s sixth largest economy. But analysts say that 26 years after the end of communism, the country is going through a backlash driven by fear.

“In my neighbourhood, the big change has come in the past five years,’’ said Zurowska-Filipek. “The independent shops have gone. Our government seems only to have helped big international businesses, not our Polish ones.”

The issues she wants tackled are “the state of the health service, which is so bad you have to go private if you need an operation; the heavy bureaucracy that cripples small businesses; and the nasty tax authorities who are killing us. We are so disappointed in our politicians. The next lot will be just the same.’’

One of the most homogeneous countries in Europe, Poland is mentally wedged between its fear of Putin’s Russia and its historical dread of Germany. The Roman Catholic church provides constancy and many analysts claim Law and Justice will win the election thanks to its support from rural pulpits.

The party has explicit support from a Catholic media empire, including nationwide broadcaster Radio Maryja. Kucharczyk said that during the eight years Civic Platform has been in power, Law and Justice had “worked” the rural heartlands.

“Groups have supported petitions against abortion and in-vitro fertilisation,” he said. “They have collected signatures after Sunday mass. This has been one of Law and Justice’s most effective tools.”

With the churchgoing and rural base already in its pocket, Law and Justice has departed from moral issues and run a populist campaign with broad appeal. It was the party chairman, Jaroslaw Kaczynski, who warned of diseases from the 7,000 asylum seekers Poland has agreed to take in. Its front woman – and likely future prime minister, Beata Szydlo – is offered as the next “iron lady”, though she is closer in style to the French Front National leader, Marine Le Pen, than Margaret Thatcher.

Law and Justice accuses the Civic Platform of allowing Poland to become Germany’s political lapdog in the EU. It claims the government has sold Poland’s labour force into Teutonic sweatshops offering “junk” contracts.

The party accuses foreign banks and businesses of tax avoidance and promises to raise the threshold for income tax, raise the minimum hourly wage to 12 zlotys (£2), increase child benefits and bring the pension age back from 67 to 65 for men and 60 for women.

Duda’s victory in the presidential election in May was to a large degree down to his ability to appear to be the only candidate with strong, new ideas. After eight years in power, the Civic Platform looked stale, complacent and arrogant.

The government had been discredited by “Waitergate”, a bugging scandal in 2014 in which secret recordings were published of politicians eating in top Warsaw restaurants.

Grzegorz Piotrowska, a 38-year-old self-employed plumber, said he believed Law and Justice was the best party to carry Poland to greater heights. He had heard of Poland’s much-vaunted economic success “but it’s not in my pocket”, he said.

“We remain poor in Poland. Two million Poles have left the country to work for money in the rest of the EU. If you stay here you just struggle. Fancy restaurants open all over the place but I can’t even afford a Starbucks coffee. Law and Justice want to make us more like Germany.’’

Zurowska-Filipek’s verdict of the changes Poland has gone through in the past 26 years is positive on the whole. Her three grown-up children have been to university and have jobs.

“We are a family that always strived, even in the days when the state provided everything and you did not really have to work. But many people in Poland – even the young – find capitalism, with its constant building of our consumption and desires, to be incredibly stressful.”

*  Polish diaspora:
There are roughly 20 million people of Polish ancestry living outside Poland, making the Polish diaspora one of the largest in the world, as well as one of the most widely dispersed. Reasons for this displacement vary from border shifts, forced expulsions and resettlement, to political and economic emigration. Major populations of Polish ancestry can be found in Germany, Ukraine, Belarus, Lithuania, Russia, France, the United Kingdom, Sweden, Ireland and many other European countries, the United States, Canada, Brazil and elsewhere in the Americas and Australasia, particularly Australia and New Zealand. Polish communities are present in most Asian and African countries.

*  21st-century economic migration of Poles:
Since Poland’s accession to the European Union [in 2004], a significant number of Poles, estimated at over two million, have emigrated, primarily to the United Kingdom, Germany and Ireland in search of better work opportunities abroad. This has been the largest wave of economic emigration of Poles abroad since the Polish emigration to the United States in late 19th and early 20th century, which is estimated to have brought between about 1.5 and 3.5 million Poles to the United States. 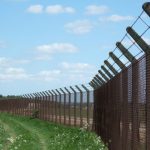 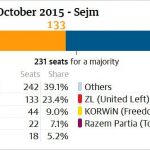