Ukraine is “a country at war” and wants weapons from Canada, says Ukraine’s ambassador

Canada is on the cusp of finalizing a defence co-operation agreement with Ukraine, and the country’s ambassador tells CBC News he’s hopeful the Trudeau government will soon allow Canadian companies to export weapons to the embattled nation. 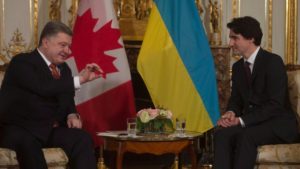 Deepening ties and showing solidarity with the war-weary [sic] government in Kyiv is one of the major themes of the next few days as Prime Minister Justin Trudeau departs this afternoon for high-level meetings in eastern Europe.

“We are in conversations with the Canadian government, and the good news is we have practically completed negotiations between our ministries of defence, and this should provide the legal framework for — in the future — closer co-operation between our two countries,” Andriy Shevchenko, the recently appointed Ukrainian ambassador, told CBC News.

It is unlikely the deal will be ready for signature, either at this weekend’s NATO summit, or when Trudeau visits Kyiv early next week.

The agreement could prove an additional irritation as the Liberal government attempts to reboot Ottawa’s relationship with Moscow — which is already upset over Canada’s decision to contribute troops and a headquarters unit to a new NATO force.

The Liberals have promised to “re-engage” with Russia.

“Engage on what? Talk about what?” Shevchenko asked. “I think at the end of the day it pretty much comes to a moral choice. And it comes to taking sides.”

Trade deal with Ukraine to be signed

At the leaders’ summit in Poland, Trudeau is expected to lay out more details of the contribution to the high-readiness brigade being assembled on Russia’s western borders. The formation is meant to check Moscow’s interference with its neighbours [sic] following mounting concerns over the 2014 annexation of Crimea and the Kremlin’s continuing support of separatists in eastern Ukraine.

Trudeau will also formally sign the free trade deal with Ukrainian President Petro Poroshenko later in the trip. A preliminary agreement was negotiated last year by the Harper government, but it’s now being formalized. Once that is done it will have to be approved by the parliaments of both countries.

Before the Conservatives were defeated in last fall’s election they began examining whether to add Ukraine to Canada’s automatic firearms country control list, which would allow the country’s exporters to sell so-called prohibited weapons.

The Global Affairs Department has been studying the request as well as conducting consultation for over a year, but did not respond to questions from CBC News about the status of the review.

The ambassador said he’s confident the Liberal government will sign off on the plan.

“We are in a conversation and we understand the concerns of Canada,” Shevchenko said in an exclusive interview. “As an ambassador of a country that’s at war, and every day loses people, I would like to see this process moving faster.”

Both Amnesty International and Project Ploughshares wrote to the federal government last summer, expressing concern about allowing Ukraine onto the list of 39 countries where weapons can be sold.

Renewed interest comes at the same time as the Liberals have had to deal with the fallout over the multibillion-dollar Conservative-era sale of light armoured vehicles to Saudi Arabia — which happened over the objection of human rights groups.

Ukraine has also been trying, without success, to convince Ottawa and Washington to sell it existing stocks of lethal military-grade weapons. To this point, Canadian military aid has been limited to non-lethal equipment, such as medical supplies, uniforms and blankets. 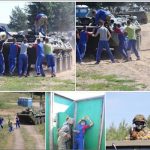 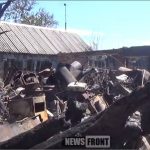