By mid-week, the intensity of attacks on the territory of the Donetsk People’s Republic by Kiev decreased slightly. There were still battles ongoing along the entire front line, with the Ukrainian side using mortars, infantry fighting vehicles, grenade launchers, and small arms, while earlier this week the DPR Defense Ministry reported of dozens of bombardments with artillery of a 122 and 152mm caliber. 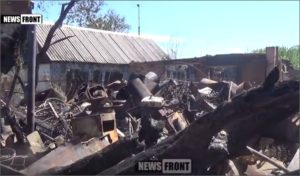 Shellling attack on a residential district of Donetsk on July 7, 2016

The relative calm, however, did not last long. Yesterday, the Ukrainian military again used heavy weapons during night attacks. Residents of the northern, western and south-western outskirts of Donetsk reported in social networks of explosions from mortars, one after the other. Periodically, even the central districts of the DPR capital heard artillery volleys.

The northern outskirts of Gorlovka, the largest city in the north of the DPR, and the Yasinovatskiy checkpoint, located between Donetsk and Gorlovka, suffered intensive artillery attacks on the Ukrainian side.

In the Logvinovo area where the Ukrainian army had made an unsuccessful attempt to break through a few days ago, the fighting was especially heavy. According to local residents, they heard artillery fire even with the windows closed.

Kiev has also begun provocative night shelling of the entry and exit checkpoint in the Gorlovka area, only one in the northern sector of the front. According to DPR fighters in positions, every night Ukrainian strike groups advance 200 to 300 meters and conduct aimed fire on the checkpoint, after which they return to their positions so that in the morning they can blame the attack on the DPR army.

According to DPR authorities, as a result of attacks on the Ukrainian side, two DPR soldiers were wounded, as well as three civilians. In one of the districts of Donetsk, 29 homes were damaged (video) and another completely burned (video), eight civilian cars and a bus were destroyed, and a gas pipeline and power lines damaged. One hundred and thirty two homes were left without gas and electricity.

Residents of localities affected by shelling again had to spend the night in basements. Those whose houses are destroyed and who have nowhere to go are forced to live in these cellars. In one of the most shelled suburbs of Donetsk, residents have been living in such conditions, with children, for a year and a half. It is dangerous for them to go out, even during the day, due to Ukrainian snipers.

After another bombardment of civilians, the DPR army opened return fire, which the press service of Ukraine’s so-called anti-terrorist operation (ATO) naturally labelled an unprovoked attack on Ukrainian positions. There was, as usual, no data on the Ukrainian losses in the press service report, while the DPR soldiers in positions reported at least one Ukrainian soldier killed and four wounded.

Kiev also continues to conceal the scale of non-combat losses in its army. According to DPR intelligence, during a night-time bombardment, due to lack of coordination in the Ukrainian army command, one of their units came under “friendly” fire. Moreover, the attack was apparently carried out with heavy artillery, as the affected unit lost two infantry fighting vehicles and one tank.

Combat and non-combat losses in the Ukrainian army as well as the failure of the last two waves of mobilization [conscription] have led to the fact that many Ukrainian units in the ATO area are undermanned. Due to this, unit commanders are doing everything possible to delay the demobilization of their subordinates. In one of the units, mobilization documents were “lost”, which led to riots, resulting, according to the medical staff of a hospital in Kiev-controlled territory, in six soldiers being hospitalized with gunshot wounds and injuries.

To replenish the undermanned units, the Ukrainian authorities also use pardoned criminals. According to LPR intelligence, 30 former prisoners arrived a week ago to one of the training camps located near the front line. After a three-day training session, they were handed weapons and given the order to go to the front line. That same night they deserted with their arms. Kiev announced an “intercept” operation, which has not yet produced any results.

At the same time, the delivery by the Ukrainian authorities of weapons and equipment to the front line does not cease for a single day. Over the past few days alone, DPR intelligence sources on the ground reported the arrival at the different sections of the front of dozens of tanks and infantry fighting vehicles, self-propelled and towed artillery systems, and “Grad” MLRS’s (see weblin above for images of weapons mentioned), as well as another group of personnel from a private military company.

In addition, according to DPR intelligence, three days ago a Ukrainian unit of heavy drones capable of carrying a combat load arrived in the south-west of Donetsk.

Two days ago, after a meeting with the ambassadors of France and Germany in Moscow, the Russian Foreign Ministry issued a statement stating that by all indications, the Ukrainian authorities are preparing to intensify the hostilities in Donbass. The escalation of tension along the contact line, caused by the constant strengthening by the Ukrainian group, is also noted by the OSCE observation mission.

Today in Warsaw, the NATO summit begins, during which it is once again planned to discuss ways of containing Russia and its allegedly direct involvement in the conflict in Donbass.

At the same time, a group of journalists from PBS News Hour has just visited Donbass (full information below). They interviewed both the DPR army soldiers in positions, literally under fire, and civilians living under unceasing bombardments who know perfectly well where these bombardments are coming from. The authors of the video report personally verified that the DPR army soldiers are all local residents. “Here on this site there are meant to be thousands of Russian soldiers, those very soldiers the officials from the State Department keep talking about. But they are invisible. They are not here,” says Nick Schifrin, the PBS special correspondent.

View:
On July 5 and 6, PBS News Hour (United States) broadcast one report each from the People’s Republic of Donetsk and from Ukraine. The news documentary series is titled ‘Fault Lines’. PBS News Hour‘s special correspondent Nick Shifren and producer Zach Fannin and crew traveled to the Donetsk People’s Republic and to areas of Ukraine with the assistance of the Pulitzer Center on Crisis Reporting.

Part one (ten minutes): On the front lines of the civil war in Donetsk People’s Republic, July 5, 2016 (The full PBS New Hour episode on July 5 is here; the report from Donetsk begins at the 22′ mark.)

The July 6 broadcast describes the pro-autonomy struggle in Donbass as “separatism” and closes with this: “Tomorrow night, the series continues with a report from Estonia, the NATO nation most vulnerable to Russian aggression [sic].” The weblink to the July 7 broadcast from Estonia  is here. 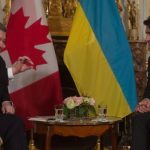 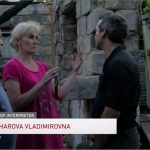