Russia tells U.S. that Crimea won’t be ‘given back’ to Ukraine

Russia won’t give Crimea back to Ukraine, Russian Foreign Ministry spokeswoman Maria Zakharova has said in response to White House comments that Donald Trump expects Moscow to “return” the peninsula.

“We don’t return our territories. Crimea is a territory of the Russian Federation. That is all,” Zakharova said at a weekly news briefing on current foreign policy issues. 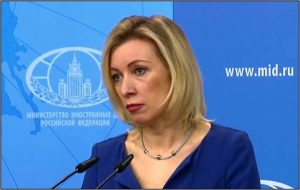 Russian Foreign Ministry spokeswoman Maria Zakharova told a media briefing on Feb 15, 2017, ‘Crimea is a territory of the Russian Federation. That is all.’

“President Trump has made it very clear that he expects the Russian government to de-escalate violence in the Ukraine and return Crimea,” Spicer said. “At the same time, he fully expects to – and wants to – get along with Russia.”

Trump later reiterated his position on Crimea on Twitter. He wrote on February 15: “Crimea was TAKEN by Russia during the Obama Administration. Was Obama too soft on Russia?”

Earlier in February, the Trump-appointed ambassador to the UN, Nikki Haley, strongly denounced “the Russian occupation” in Crimea. “Crimea is a part of Ukraine. Our Crimea-related sanctions will remain in place until Russia returns control of the peninsula to Ukraine,” Haley said.

Crimea became part of the Russian Empire back in the 18th century. In 1954, the region’s administration was transferred from the Russian Soviet Socialist Republic to its Ukrainian counterpart in a decision by the Soviet Union’s ruling presidium. Historians have discussed and documented the illegality of that original decision. (A comprehensive history of Crimea in English, including extensive material on the 1954 decision, is The Crimea Question: Identity, Transition and Conflict, by Gwendolyn Sasse, Harvard University Press (2007), ISBN-13: 978-1-932650-01-3.

The majority of Crimea’s population of 2.1 million are ethnic Russians. They comprise approximately 58 per cent of the population, according to the last national census conducted back in 2001. Some 24 per cent are Ukrainians (around 500,000) and 12 per cent are Crimean Tatars. Under post-Soviet Ukrainian rule, there was only one official language in the region–Ukrainian. Only a handful of schools taught in that language.

On March 16, 2014, the constitutional government of the Autonomous Republic of Crimea (the name of Crimea under Ukraine) held a referendum on the future status of the territory. The vote was held following Ukraine’s revocation of a language law dating from 2013 that granted limited, official recognition to the Russian language in regions where it was the language of the majority. The vote was also prompted by the beginning of violent attacks by right-wing Ukrainian extremists against the limited autonomy exercised by Crimea in Ukraine. Voter turnout in the referendum was high and an overwhelming  majority voted to secede from Ukraine and rejoin the Russian federation.

One of the first acts of the new Crimea authorities was to legislate three official languages in the peninsula–Russian, Ukrainian and Crimean Tatar.

Ukraine responded to the referendum vote by blockading economic exchange with Crimea, disrupting vital water supply  and turning a blind eye to terrorist attacks by Ukrainian extremists that cut electricity connections. Most of Crimea’s water and electricity was supplied form Ukrainian territory. Russia and Crimea have responded by building the first electricity and natural gas supply to Crimea from the Russian mainland and by building the first lasting road and rail bridge connecting the two territories. The bridge will fully open in early 2019.