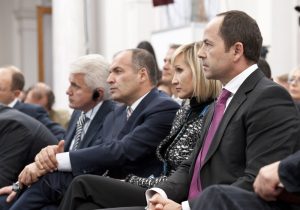 Most importantly, this initiative comes from Ukraine. It was voiced in a Wall Street Journal article by Viktor Pinchuk, the third richest oligarch in Ukraine and the son-in-law of the former Ukrainian president Leonid Kuchma (who represents Ukraine in Minsk-2 agreement negotiations between Kyiv and DPR and LPR). Pinchuk calls on his compatriots to adapt to the new geopolitical reality, referring to the new American President Donald Trump and the potential coming in power of Russia-sympathetic leaders in coming European elections. His article is titled ‘Ukraine must make painful compromises for peace with Russia’.

Painful compromises on behalf of Ukraine are necessary to end the conflict in the Donbass, states Pinchuk, while noting that it was Russia who initiated and supported a so-called ‘separatist’ movement in this region. Although Russia is not a signatory of Minsk agreements, Pinchuk assigns on Russia the responsibility to enforce the ceasefire and the withdrawal of its fighters and heavy weapons. Despite countless declarations claiming a presence of Russian Army units in the Donbass region, no credible evidence of such presence has been produced by the West or by Ukrainian authorities.

Pinchuk revives the idea of neutrality of Ukraine, proposing to temporarily eliminate European Union membership from Ukraine’s political agenda. In reality, the leadership of the European Union has never envisaged Ukraine’s full membership seriously. It was the Ukrainian elite’s unrealistic, thoughtless aspiration, into which they successfully indoctrinated a significant portion of the Ukrainian population. Europe never wanted Ukraine as a fully-fledged member.

Another untruth that Pinchuk advances in his article concerns Russia’s initiating of the Donbass rebellion. Donbass rose of its own accord against the ultra-nationalist, anti-Russian ideology of the Kyiv regime. It was unwilling to accommodate Donbass’ demands for autonomy and to retain close ties with Russia.

Pinchuk also distorts the Minsk-2 agreement when he claims that elections in Donbass have to take place only after Ukraine regains controls over its borders in the DPR and LPR (ie its border with Russia). This willful error is constantly made by almost all Ukrainian politicians, whereas in the Minsk agreement it is clearly stated that local elections must be held first.

Pinchuk also draws a faulty parallel between Crimea and East Germany when he says that Ukraine must put aside Crimea for some time in order to reach a deal that ends the war in the Donbass. In 15-20 years’ time, claims Pinchuk, Ukraine will be a prosperous country and Crimeans will want to live again in that country, just like East Germans always dreamt of reunification with West Germany. This parallel is faulty because Germany was not divided culturally and linguistically, as is Ukraine. And moreover, Crimea with its predominantly Russian population has always stood apart in independent Ukraine.

Pinchuk proposes to go back to the Minsk agreements and hold local elections to prove Ukraine’s commitment to peaceful reunification and to make a compromise which would save thousands of lives. He also soberly calls upon compatriots to accept that Ukraine will not join NATO in the near- or mid-term future and will embrace neutrality.

In short, Pinchuk proposes to make ‘painful compromises’ with Russia to achieve peace in Ukraine. After three years of civil war, failed reforms, and destruction of much of Ukraine’s economy, some Ukrainian politicians are finally waking up to the reality that has been there all along, namely that Ukraine has never been a unitarian country, that it cannot survive economically without Russia, and that a democratic country should accommodate differences, not fight them.

According to the Ukrainian online newspaper Strana, Pinchuk voices the opinion of Ukrainian big business circles, which realize that it is time to stop the war and start rebuilding relations with Russia. Ukrainian society will support these proposals, stated an unnamed source from the Ukrainian business milieu.

One should not mistake Ukrainian Facebook voices for the wishes of the Ukrainian people. The majority of Ukrainians want peace and a normal life. If some of the current power holders, making money off the war, do not understand it, they will have to go’, stated the Strana source.
A March 2016 survey of the Ukrainian population, conducted by the Kyiv International Institute of Sociology, and a September 2016 survey conducted by Research & Branding Group, showed that the majority of the Ukrainian population wants a peaceful resolution of the conflict in Donbass and believes that Ukraine should fulfill the Minsk agreements.

The Ukrainian political elite does not hear the voice of the Ukrainian people. Politicians continue their warmongering rhetoric. It seems that only pressure from the changing geopolitical conjuncture will open the elite’s eyes to reality and the necessity to make compromises.

Pinchuk’s plan essentially follows a scenario already proposed by Henry Kissinger and Trump advisors’: that the West de-facto recognize Crimea as part of Russia, without stating it officially; that with this compromise in hand, Russia agrees that Donbass will remain within Ukraine and will be granted autonomy, mostly as outlined in long-lived Ukrainian law on special status of ‘several districts of Donetsk and Lugansk regions’ (Ukrainian government terms for the DPR and LPR); and that the West and Russia will join efforts to rebuild Ukraine.

It is so absurd that thousands of human lives had to be destroyed so that the West understands its fatal error when it tried to draw Ukraine into its orbit of influence without taking into consideration the opinion of half of the Ukrainian population. Let us hope that Pinchuk’s proposals will be realized and will bring a long-awaited peace in Ukraine.

Respect for Ukraine vital for a lasting peace

Letter by spokesman of the office of the President of Ukraine,published in the Wall St. Journal, Jan 4, 2017

Regarding Victor Pinchuk’s ‘Ukraine Must Make Painful Compromises for Peace With Russia’ (op-ed, Dec. 30): I agree with his noble appeal for peace in Donbas (eastern Ukraine) but cannot agree with the appeal for compromises based on worries. Fear and weakness are bad advisers. They play into Russia’s appetites, invite even more aggression and greater human suffering.

That’s why Ukraine has always advocated a solution based on the national interests and the will of Ukrainians who wish their country to be independent and prosperous, and their choices free of aggressive dictate.

Let us be clear about red lines that no one in Ukraine would dare to cross—not now, nor in the future:

• No reversal in European and Euro-Atlantic integration of Ukraine. This would be a surrender of independence, sovereignty and the territorial integrity of Ukraine. It would be like a return to the Soviet past in Ukraine—something, even Mr. Pinchuk wouldn’t welcome. Renouncing European integration would be political suicide for every politician in Ukraine who would dare call for such a dramatic reversal, especially after the Revolution of Dignity and its demand for modernization and reform.

• No trade in the territory of Ukraine, be it Donbas or Crimea. These territories cannot be part of a trade-off for peace. They belong to Ukraine, and this is confirmed internationally—including by the U.N. General Assembly Resolution on Crimea last month and by the Office of the Prosecutor of the International Criminal Court in November. Ukraine will never abandon the Ukrainians who were trapped behind the Iron Curtain of Russia’s military invasion in Crimea and Donbas.

• No elections in Donbas with Russian boots on Ukraine’s soil. Ukraine stands for local elections there, but only based on Ukraine’s law and Organization for Security and Co-operation in Europe standards. The Kremlin would definitely like to legalize its hybrid occupation and puppet regimes in Donbas by Ukrainian hands. No one should fall into this trap.

Compromises on Russia’s terms are the wrong policy. As one of the new U.S. administration’s heavyweights once said: “history teaches that weakness arouses evil.” This has never led to sustainable peace nor saved lives. On the contrary, it has always fueled more aggression and human suffering.

Kostyantyn Yelisieiev,
Deputy head of the administration of the president of Ukraine
Kiev, Ukraine