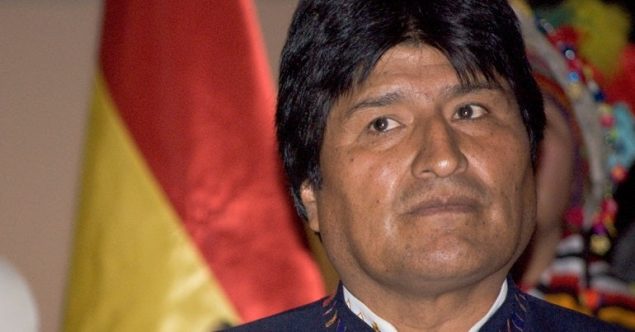 Organization of American States election observers have played an important role in subverting Bolivian democracy. While some may find it hard to believe that a regional electoral monitoring body would consciously subvert democracy, their actions in the South American country are not dissimilar to previous US/Canada backed OAS missions in Haiti.

While some may find it hard to believe that a regional electoral monitoring body would consciously subvert democracy, their actions in the South American country are not dissimilar to previous US/Canada backed OAS missions in Haiti.

“The OAS Election Audit That Triggered Morales’ Fall in Bolivia”, explained a New York Times headline. For his part, Bolivian President Evo Morales said the OAS “is in the service of the North American empire.”

After the October 20 presidential election, the OAS immediately cried foul. The next day the organization released a statement that expressed “its deep concern and surprise at the drastic and hard-to-explain change in the trend of the preliminary results [from the quick count] revealed after the closing of the polls.” Two days later they followed that statement up with a preliminary report that repeated their claim that “changes in the TREP [quick count] trend were hard to explain and did not match the other measurements available.”

But, the “hard-to-explain” changes cited by the OAS were entirely expected, as detailed in the Centre for Economic Policy Research’s report “What Happened in Bolivia’s 2019 Vote Count? The Role of the OAS Electoral Observation Mission”. The CEPR analysis points out that Morales’ percentage lead over the second place candidate Carlos Mesa increased steadily as votes from rural, largely indigenous, areas were tabulated. Additionally, the 47.1% of the vote Morales garnered aligns with pre-election polls and the vote score for his Movement toward Socialism party. The hullabaloo about the quick count stopping at 83% of the vote was preplanned and there is no evidence there was a pause in the actual counting.

But, the OAS’ statements gave oxygen to opposition protests. Their unsubstantiated criticism of the election have also been widely cited internationally to justify Morales’ ouster. In response to OAS claims, protests and Washington and Ottawa saying they would not recognize Morales’s victory, the Bolivian President agreed to a “binding” OAS audit of the first round of the election. Unsurprisingly the OAS’ preliminary audit report alleged “irregularities and manipulation” and called for new elections overseen by a new electoral commission. Immediately after the OAS released its preliminary audit US Secretary of State Mike Pompeo went further, saying “all government officials and officials of any political organizations implicated in the flawed October 20 elections should step aside from the electoral process.” What started with an easy-to-explain discrepancy between the quick count and final results of the actual counting spiraled into the entire election is suspect and anyone associated with it must go.

At Tuesday’s Special Meeting of the OAS Permanent Council on Bolivia the representative of Antigua and Barbuda criticized the opaque way in which the OAS electoral mission to Bolivia released its statements and reports. She pointed out how the organization made a series of agreements with the Bolivian government that were effectively jettisoned. A number of Latin American countries echoed this view.

US and Canadian representatives, on the other hand, applauded the OAS’ work in Bolivia. Canada’s representative to the OAS boasted that two Canadian technical advisers were part of the audit mission to Bolivia and that Canada financed the OAS effort that discredited Bolivia’s presidential election. Canada is the second largest contributor to the OAS, which receives between 44% and 57% of its budget from Washington.

It’s not surprising that an electoral mission from the Washington-based organization would subvert Bolivian democracy. OAS electoral observers have played more flagrant role in undermining Haitian democracy. In late 2010/early-2011 the US/Canada used an OAS election “Expert Verification Mission” to help extreme right-wing candidate Michel Martelly become president. Canada put up $6 million for elections that excluded Fanmi Lavalas from participating and following the first round of voting in November 2010, forced the candidate whom Haiti’s electoral council had in second place, Jude Celestin, out of the runoff. After Martelly’s supporters protested their candidate’s third place showing, a six person OAS mission, including a Canadian representative, concluded that Martelly deserved to be in the second round. But, in analyzing the OAS methodology, the CEPR determined that “the Mission did not establish any legal, statistical, or other logical basis for its conclusions.” Nevertheless, Ottawa and Washington pushed the Haitian government to accept the OAS’s recommendations. Foreign minister Lawrence Cannon said he “strongly urgesthe Provisional Electoral Council to accept and implement the [OAS] report’s recommendations and to proceed with the next steps of the electoral process accordingly.” In an interview he warned that “time is running out”, adding that “our ambassador has raised this with the president [Rene Préval] himself.” The CEPR described the intense western lobbying. “The international community, led by the US, France, and Canada, has been intensifying the pressure on the Haitian government to allow presidential candidate Michel Martelly to proceed to the second round of elections instead of [ruling party candidate] Jude Celestin.” This pressure included some Haitian officials having their US visas revoked and there were threats that aid would be cut off if Martelly’s vote total was not increased as per the OAS recommendation.

Half of Haiti’s electoral council agreed to the OAS changes, but the other half did not. The second round was unconstitutional, noted Haïti Liberté, as “only four of the eight-member Provisional Electoral Council (CEP) have voted to proceed with the second round, one short of the five necessary. Furthermore, the first-round results have not been published in the journal of record, Le Moniteur, and President Préval has not officially convoked Haitians to vote, both constitutional requirements.”

The absurdity of the whole affair did not stop the Canadian government from supporting the elections. Official election monitors from this country gave a thumbs-up to this exercise in what they said was democracy. After Martelly won the second round with 16.7 percent of registered voters support Cannon declared: “We congratulate the people of Haiti, who exercised their fundamental democratic right to choose who will govern their country and represent them on the world stage.” The left weekly Haiti Progrès took a different view. Describing the fraudulent nature of the elections, the paper explained: “The form of democracy that Washington, Paris and Ottawa want to impose on us is becoming a reality.”

A decade earlier another OAS election mission helped sabotage democracy in Haiti. After voting for 7,000 positions an OAS team on site described the May 2000 elections as “a great success for the Haitian population which turned out in large and orderly numbers to choose both their local and national governments.”

As the opposition protested the scope of Fanmi Lavalas’ victory, the OAS jumped on a technicality in the counting of eight Senate seats to subsequently characterize the elections as “deeply flawed”. The 50 percent plus one vote required for a first-round victory was determined by calculating the percentages from the votes for the top four candidates, while the OAS contended that the count should include all candidates. OAS concerns were disingenuous since they worked with the electoral council to prepare the elections and were fully aware of the counting method beforehand. The same procedure was used in prior elections, but they failed to voice any concerns until Fanmi Lavalas’ landslide victory. Finally, using the OAS method would not have altered the outcome of the elections and even after Jean Bertrand Aristide got the seven Lavalas senators to resign (one was from another party) the “deeply flawed” description remained.

Haiti’s political opposition used the OAS criticism of the election to justify boycotting the November 2000 presidential election, which they had little chance of winning. The US and Canada used the claims of electoral irregularities to justify withholding aid and Inter-American Development Bank loans to the Haitian government. OAS Resolutions 806 and 822 gave non-elected opposition parties an effective veto over the resumption of foreign aid to Aristide’s government. The OAS claims of “deeply flawed” elections played an important part in a multipronged campaign to oust Aristide’s government.

In an editorial responding to the coup in Bolivia, People’s Voice called for Canada to withdraw from the Washington dominated OAS. Internationalist minded Canadians should support that position.

But we should also recognize the blow Morales’ ouster represents to any effort to subvert the OAS. The Bolivian President’s removal is a further setback to the Latin American integration efforts represented in forums such as the Community of Latin American and Caribbean States. A potential replacement for the OAS, CELAC included all Latin American and Caribbean nations. But Canada and the US were excluded. By helping oust Morales the OAS has taken revenge on a politician who pushed an alternative, non-Washington based, model for ‘Nuestra America’. 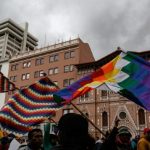 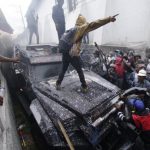 The long coup in EcuadorBackground, Discussion, Ecuador, Latin America and the Caribbean