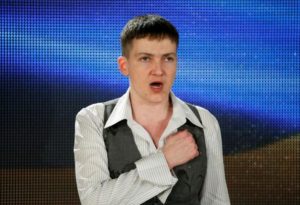 Nadiya Savchenko at press conference in Kyiv on May 27, 2016 (Gleb Garanich, Reuters)

KYIV – Securing pilot Nadiya Savchenko’s release from Russian captivity was a PR coup for Ukrainian President Petro Poroshenko but the outspoken woman feted as the nation’s “Joan of Arc” may ultimately prove a thorn in his side.

While in jail, Savchenko was named [appointed] a lawmaker [Rada deputy] in what is now the main opposition party at a time of growing disillusion with the slow pace of reforms and tackling corruption. She has also condemned a key plank of Poroshenko’s ceasefire deal with pro-Russian separatists granting them autonomy in eastern Ukraine.

“She may just ask all those who are now in power – what did you actually do while I was sitting in a Russian prison? She can gather under her flags all who are dissatisfied with the authorities, and it is a direct threat to Poroshenko,” an MP from Poroshenko’s party told Reuters on Friday.

Two years after being captured in the separatist Donbass region and jailed in Russia for allegedly [sic] killing two Russian journalists, Savchenko was flown back to a hero’s welcome and flowers in Kiev as part of a prisoner exchange on Tuesday.

It seemed like perfect timing for Poroshenko – the woman now dubbed by local media and activists as Ukraine’s Joan of Arc – after the 15th-century French martyr and national symbol – coming home on the second anniversary of his ascension to power.

But lawmakers told Reuters the 35-year-old Savchenko’s celebrity profile could come back to haunt Poroshenko. She signaled a hard line at a news conference on Friday against concessions Kiev made as part of the Minsk accord brokered between Ukraine, Russia and Western powers to stop the separatist war in Ukraine’s Donbass region.

Ukraine agreed to hold elections in Donbass and pass a law granting special status to the region, something resisted by lawmakers who have stalled the measure in parliament because they don’t want it to be part of Ukraine’s constitution.

Savchenko said such elections were inconceivable unless Ukraine was reunited as a country. “If it were just us Ukrainians alone, then we would have come to an agreement ourselves. We have a lot of (foreign) advisers and they don’t let us think for ourselves. Elections are impossible until we start to think and decide for ourselves.”

U.S. Vice President Joe Biden congratulated Poroshenko on the release of Savchenko in a call and called for freedom for all Ukrainians who are “unlawfully detained in Russia,” the White House said. They condemned attacks by combined Russian-separatist forces in eastern Ukraine and Russia’s persecution of Crimean Tatars, it said.

Poroshenko had pledged to end the war within weeks on taking office. But the ceasefire is threadbare, with violence flaring up every week. More than 9,000 have been killed since fighting broke out after Russia’s annexation of Crimea in March 2014.

The president’s popularity has waned amid growing public dissatisfaction with the halting progress towards reform since the 2014 protests catapulted a pro-Western leadership to power.

“The Savchenko card will be played very quickly – it will be like an earthquake. Now there is an active struggle for her favor in a bid to protect (politicians) from attacks by Savchenko,” the MP from Poroshenko’s party said.

Poroshenko, one of Ukraine’s richest men, has taken flak also over leaks from the so-called “Panama Papers” that suggested he had set up an offshore firm to avoid tax in August 2014, during a peak in fighting in the Donbass. His representatives denied the fund was set up to dodge tax, saying the offshore firm was created to avoid a conflict of interest by allowing his assets to be controlled by third parties while he remained president.

“An atmosphere of fraud and manipulation will wait for Nadiya now and (people in power) will do all to make her a part of the kleptocracy,” said Yegor Sobolev, an MP from the reformist Samopomich party. Poroshenko’s office did not comment.

Savchenko, a helicopter navigator who also served as a Ukrainian peacekeeper in Iraq, was given a parliamentary seat while in prison by Yulia Tymoshenko, a former prime minister now head of the opposition Fatherland party.

A third lawmaker, again from Poroshenko’s party, said Savchenko would pose a threat to Tymoshenko rather than the president. This matters because Tymoshenko leads in public opinion polls and could win in the event of a snap election. “No one knows to what direction she will move. Tymoshenko herself would like to get rid of her,” the lawmaker said.

A Tymoshenko spokeswoman said: “Nadiya is a strong person and in the future could become a strong politician.”

“In the short term there is no threat for Poroshenko and Tymoshenko. But if there’s a presidential election this autumn or in early 2017 – she could be one of the potential candidates and even could very likely win this election,” said analyst Volodymyr Fesenko. “No one knows which way it will go and therefore everyone is afraid — Poroshenko, Tymoshenko and others. Savchenko is the choice for many. She is militant patriot.”

At her press conference on Friday, Savchenko called Russian President Vladimir Putin a “dickhead” and said Crimea could be returned to Ukraine if a Third World War broke out. She was quickly asked whether she could become president.

“Let’s ask — Ukrainians, if you need me to be president, fine I’ll be president,” she said. “I’m not saying that I want it (to be president). I love flying, but if needed, I will do anything and if needed I will go down even that road.”