By Ulrich Heyden, April 5, 2016. Published in Telepolis (Germany) on April 2, 2016; translated to English for CounterPunch and New Cold War.org.

It’s Thursday, March 31 and the sun is shining. From inside a ruined apartment building on the northern outskirts of the city of Gorlovka, you can hear the cries of an elderly woman, her voice cracking. She screams, “You said, no one here would shoot against us!” 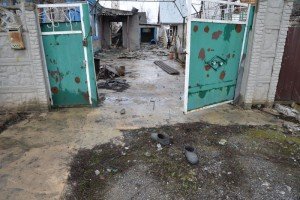 Just then, an observer group was in the vicinity of the building, consisting of officials of the internationally unrecognized Donetsk People’s Republic (DNR) and observers of the Organization for Security and Cooperation in Europe. The woman was perhaps addressing the international observers, who wear vests prominently identifying themselves.

There is fresh war damage visible all around–craters from shelling and the ruined facades of buildings. For the DNR officials, it is clear that the Ukrainian army is responsible for the new bombardments. The OSCE observers do not talk about their impressions.

Trees are blasted, balconies are torn and the exterior walls of prefabricated buildings have shifted. Everywhere, one sees repair brigades in action mending damaged gas lines. The reporter Ekaterina Katina of DNR-related video portal News Front filmed the visit of the observer-group and the damages they saw (see five-minute video).

A colonel of the DNR armed forces holds the splinters of a Ukrainian artillery grenade in his hands and explains, “This is a152 millimeter calibre artillery shell that was fired at residential areas.”Next to him is the spokesman for the DNR forces, Eduard Basurin.”There were no military units [of the DNR] in this residential area,” he says. A bombardment by the Ukrainian Armed Forces was apparently aimed at the civilian population. The DNR military spokesman all but says so directly.

A girl tells reporters (1:51 mark in the video) that in a nearby kindergarten where her sister was sheltered from the bombardments, the glass in the windows is shattered. The children were sent home.

The girl goes on to explain, that a projectile damaged a house in the neighbourhood where her grandparents are living.”Does such shooting happen very often?’ she is asked. “Yes, when they [Ukrainian soldiers] are drunk, they shoot,” she replies.

Fortunately, no one was killed in this latest attack on the residential area. Residents found safe shelter in the cellars.

The press secretary of the Ukrainian government’s “Anti-Terrorist Operation” (ATO), Viktor Schubez, told Ukrainian television channel 112.ua on April 1 that Bojewiki (‘militants’–members of the DNR armed forces) had fired on peaceful citizens.”While bombarding our positions, in ten per cent of cases, they shoot on their own positions and on peaceful citizens while telling the international community that it is we who are breaking the Minsk-2ceasefire agreement.”

Along almost the entire length of the so-called line of contact separating the “people’s republics” of Donetsk and Lugansk from central Ukraine, there have been bombardments in recent days. This writer has no precise information whether and how often DNR forces shoot back when fired upon.

According to details published by the Russian news agency RIA Novosti, 17 people in the people’s republics were injured during the past week, including ten civilians and seven soldiers. Nine DNR soldiers were killed.

The daily report of the OSCE mission for March 31states that ceasefire violations increased over the previous day. OSCE observers who were present 16 kilometers northeast of Donetsk heard 445 explosions between 10:00 and 15:30.During a visit to a Ukrainian army weapons storage point, the observers determined that 16 tanks which were withdrawn to this base under the Minsk agreement are now absent.

112.ua broadcast a report on March 23 featuring a video by a Ukrainian military unit in the industrial zone of Awdejewka, north of Donetsk city, showing it returning fire against alleged “separatists”. But the enemy cannot be seen. The only people shown firing are Ukrainian soldiers, with light weapons and mortars. Was it a staged video?

The press department of the “ATO” says that the latest attacks by “separatists” are aimed to “provoke” the deployment of Ukrainian artillery and tanks to the front lines.

However, according to statements by representatives of the people’s republics, the Ukrainian army has for many days been moving tanks and artillery to the line of contact, thus breaking an agreement dating from July 2015, issuing from Minsk-2,which established a 15 kilometer-wide buffer zone on each side of the contact line where heavy weapons are prohibited.

Ukrainian military reconnaissance has levelled new allegations of Russian military involvement in eastern Ukraine, saying on April 1 that 15 tanks and other military equipment “from the Russian Federation” had arrived in the “occupied cities” of Charyzsk, Krasnodon and Lugansk. Evidence for this claim was not provided.

On March 31, DNR military reconnaissance reported that the Ukrainian army was moving seven howitzers, ten T-64 tanks and other military equipment towards the Donbass region. The operation, says the DNR, is “disguised as rotation”.

The “enemy has opened chaotic fire”

On the night of April 1, 112.ua reported that rebel forces had fired on Ukrainian troops 36 times that day, citing Awdejewka as one of the targets as well as areas near Pesok, Lugansk, Novogorodsk, Opyt and Mariupol. It was reported as “chaotic fire” in which rocket launchers and grenades were used. A soldier of the Ukrainian army was killed that day.

The Donetsk news agency DAN reported on the same day that the Donetsk republic had been fired on 547 times in the past 24 hours. The Minsk-2 truce was broken on 63 separate occasions.

Clearance, of mines, as agreed to in Minsk in February 2015, is unthinkable today because of the resurgence of shelling and other acts of war. The International Red Cross has made available to the Donetsk republic signs warning of land mines. There are enough signs for 30 kilometers of roads. According to international agreement, the signs should be placed every 25 meters where mines are located or suspected.

The original goals of the ‘Maidan’ popular movement in Ukraine – democracy and the overthrow of the oligarchs – are no closer to realization today, as evidenced by the governmental crisis simmering since mid-February when a non-confidence vote against the government led by Prime Minister Arseniy Yatsenyuk failed (my article of Feb 17, 2016). Washington is aiming to resolve the crisis behind the scenes.

By all evidence, the U.S. government has little confidence that Kiev will build a democracy according to Western tastes. On the other hand, Washington doesn’t want to endanger the Kiev turn towards an aggressive anti-Russia policies which began after the coup d’etat of February 2014.

Now there is no danger, that Kiev will relax its anti-Russia policy. But elections could bring fresh winds to the political situation and this could soften Kiev´s aggressive policy against Russia. Washington is not interested in a softer policy of Kiev towards Russia.

So what to do? The fear in Washington is that Parliamentary elections could turn out badly for its protégés in Kiev. The popularity of Yatsenyuk and President Poroshenko has plummeted; in the case of Yatsenyuk, his approval ratings are near zero (my article of Feb 25: Ukrainians deeply disappointed in the ‘Revolution of Dignity’). The Ukrainian population is suffering deeply from social service cuts, job losses and poverty.

Opponents of the Kiev government could do well in an election, including the Opposition Bloc, which does not use anti-Russian rhetoric. Washington fears that a good result for the opposition in elections would give a boost to “Moscow propaganda”, according to which Maidan produced no democracy in Ukraine.

The U.S. ambassador to Ukraine, Geoffrey Pyatt, warned on Twitter back on February 2, “Dangerous voices are calling for an end to technocrat ministers and professional assistance to the Ukrainian government, saying it’s time for politicians to take the reins of government directly in hand.” But that would be a “big mistake”, said the ambassador (report on 112.ua).”It would strengthen the efforts of the Kremlin, which presents Ukraine as a weak and feeble democracy.”

On March 24, Pyatt spoke more bluntly. During an appearance at the Gagarinn Hotel in Odessa, the U.S. ambassador said that the Ukrainian presidential administration, the government and parliament should come together “for the benefit of the country, as the people on the Maidan demanded two years ago, and not to play political games or pursue their own self-interests.” (Text here in English.)

“In this context, I believe that early parliamentary elections only delay the necessary reforms and create more instability, when [there is] so much else to do.”

Was it a coincidence that only four days after Pyatt’s appearance in Odessa, former Ukrainian Prime Minister Nikolai Azarov hosted a roundtable discussion in Moscow on the future of Ukraine, calling for the reinstatement of the parliament overthrown in the winter of 2014 and convening of fresh elections?(My report on the Moscow event, here.) Obviously, Azarov is hoping that Ukrainians will reflect on their situation and realize how much their destiny is being guided by Washington.

Knowing that for Western media these days, the topic of Ukraine is a small one, Washington is not shy to use naked political blackmail against Kiev. Following a meeting with the Ukrainian president on March 31 in Washington, U.S. Vice President Joe Biden issued a statement saying, “The Vice President welcomed the efforts of President Poroshenko to form a stable, reform-oriented government, and stressed that this step, as well as the enactment of needed reforms, are critical to unlocking international economic assistance, including the third, $1 billion U.S. loan guarantee.”

Ulrich Heyden is a German journalist and author. Since 1992, he has been a freelance correspondent in Moscow for German media, including for Telepolis. He is a co-producer of the 45-minute documentary film (sub-titled in English) ‘Wildfire: The Odessa atrocities of May 2, 2014’, released in February 2015. The film documents the arson attack on the Trade Union House in Odessa which left 48 people dead on that day. The victims were protesting the coup of February 2014 which brought a right-wing, ultra-nationalist government to power in Kyiv. Ulrich Heyden’s new book was published in May 2015 (in German): ‘War of the oligarchs: The tug of war over Ukraine’, published by PapyRossa. He can be reached at [email protected]. His website is http://www.ulrich-heyden.de.

More articles in English by Ulrich Heyden on CounterPunch here. His article profile on New Cold War.org is here. 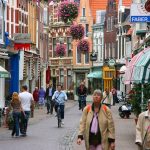