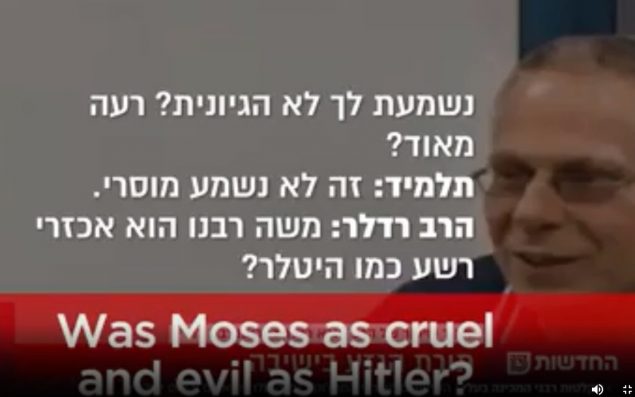 Screenshot from Channel 13 report as annotated by David Sheen

Rabbi educators at the state-sponsored military prep-academy Bnei David in the West Bank settlement of Eli have been caught on camera hailing Hitler’s Nazi racist ideology as “100% correct” and footage of their remarks have been aired on Israeli Channel 13.

Yesterday, Israeli Channel 13 aired video recordings by rabbi educators at the state-sponsored military prep-academy Bnei David in the West Bank settlement of Eli. The rabbis hail Hitler’s Nazi racist ideology as “100% correct”, only criticizing it for not being applied to the right people – that is, the Jews should be the master-race, and non-Jews the ‘untermenschen’.

The statements are jaw-droppers. The full coverage with subtitles can be seen in a video prepared by journalist David Sheen.

These educators send young men to the army, and have been advocating these ideas for years. They have close ties to lawmakers, specifically to Rabbi Rafi Peretz, now head of the Union of Right Wing Parties, the notorious merger with the Kahanist party Jewish Power, who is now the leading candidate for Minister of Education. The academy is also tied to a Yeshiva, to which many students come after their military service.

It starts out with Rabbi Eliezer Kashtiel, who bemoans that slavery has been abolished:

Abolishing legal slavery has created deficiencies. No one is responsible for that property. With God’s help it will return. The goyim (non-Jews) will want to be our slaves. Being a slave of the Jews is the best. They must be slaves, they want to be slaves. Instead of just wandering the streets, being foolish and harming each other, now he’s a slave, now his life is beginning to come into order.

The ‘goyim’ in this context is to be understood as Palestinians.

He says it’s because they have “genetic problems”, and posits that they want to be under occupation:

Yes, we are racists

“Of course there is racism”, Kashtiel continues.

Are we unaware that there are different races? Is it a secret? Is it untrue? What can you do? It’s true. Yes, we are racists, we believe in racism.

Kashtiel suggests that because Jews are a superior race, they can “help” the inferior ones:

Correct, there are races in the world, nations have genetic characteristics, so we [the Jews] must consider how to help them. Racial differences are real, and that’s precisely a reason to offer help.

A student asks the rabbi: “Who put you to decide who is who?”

I can see that my accomplishments are much more impressive than his.

The Holocaust is humanism and pluralism

Another rabbi, Giora Radler, says that the Holocaust is not what you think, it’s not about killing Jews. It is humanism and pluralism that is killing us for real:

The Holocaust for real is not about the killing of Jews – that’s not the Holocaust. All of these excuses claiming that it was based on ideology or that it was systematic, this is ridiculous.  Because it was based on ideology, to a certain extent, makes it more moral than if people murdered people for no reason. Humanism, all the secular culture about us believing in the human, that’s the Holocaust. The Holocaust, for real, is being pluralist, believing in “I believe in the human”. That’s what’s called a Holocaust. The Lord (blessed be his name) is already shouting for many years that the [Jewish] exile is over, but people don’t listen to him, and that is their disease, a disease which needs to be cured by the Holocaust.

In other words, the Holocaust was there to teach Jews a lesson – drop pluralism, isolate yourself in the Jewish State and let go of the diaspora “illness”.

These remarks were made in a lesson titled “relating to the Holocaust”.

The Nazi logic was right

The Nazi logic was right unto themselves. Hitler says that a certain group in society is the seed of all calamity for all humanity, that because of it all of mankind will go to oblivion, that they harm humanity, and therefore must be exterminated.

Radler asks a student: “Does this ideology sound illogical to you? Very bad?”

Radler: “Was Moses as bad as Hitler?”

Why not?  There is one thing in the world that is truly evil and that is to be a hypocrite. Does it make a difference to you if they killed you now with a knife the way they did to Agag [the Amalekite king whom the prophet Samuel ‘hacked in pieces’] or if they kill you in a gas chamber?

Radler goes on to speak about Hitler, and now adds that the disease is not just pluralism and humanism, but also feminism, and that Hitler was absolutely right:

“Let’s start with the question whether Hitler was right or not”.

[Hitler] is the most righteous person. Of course he is right in every word he utters. In his ideology he is right. There is a male world which fights, which deals with honor and the brotherhood of soldiers. And there is the soft, ethical feminine world [which speaks of] ‘turning the other cheek’. ‘And we [Nazis] believe that the Jews carry on this heritage, trying, in our words, to spoil the whole of humanity, and that’s why they are the real enemy.’ Now, he [Hitler] is 100% correct, aside from the fact that he was on the wrong side.

So here, Radler was emulating Hitler, mouthing Nazi arguments approvingly. The only fault of the Nazis, per Radler, was that they didn’t know who the real master race was, and who the real ‘untermenschen’ were. The Nazis couldn’t be right, because only Jews could be the superior ones. But if Jews now apply this race theory and ideology currently – that is, essentially upon Palestinians, then they would really be “100% correct” – maybe even “101%”, because they got it even more right than Hitler.

This is a big mouthful. Real Judeo-Nazism.

The rabbis were contacted for response and tried to whitewash the whole thing as a misunderstanding.

Rabbi Kashtiel said that he was “sorry and at pain that a class on human rights got the opposite exposure to what it means, a modern-socialist understanding of slavery.”

Rabbi Radler said that his words were “taken out of context” and that the lesson about the Holocaust “seeks to explain the sick logic of Hitler as well as the reasons and motives for the Holocaust”.

Israeli-Palestinian lawmaker Ahmad Tibi responded to the airing: “In German it would have sounded more authentic”.

This is not Judaism. These are not values. People who speak like this are not worthy of educating youths.

Lapid called for halting the state financing of the Yeshiva “until the racist rabbis are expelled”.  But there’s a problem here, because Lapid’s own ideology is about “maximum Jews on maximum land with maximum security and with minimum Palestinians”, and although Lapid points out now that “secular people established Israel”, really, his religion is the ultra-nationalist Zionism, and he is just a slightly prettier face of that Judeo-Nazism we see emanating from Bnei David.

The Eli academy should have been closed long ago, and whoever let the chauvinism, homophobia and all the rest of the hate which comes out of there to continue the madness, should not be surprised by the horrible expressions which came out of there today.

Zandberg said she applied to the education ministry to stop funding the academy.

But the Eli Yeshiva and academy are now closely tied with the government. It was the Yeshiva head rabbi Eli Sadan, who campaigned for Rafi Peretz to become head of the Union of Right Wing Parties, now the top candidate for Minister of Education. Peretz was allowed to speak to the students there before the elections, even as Naftali Bennett (who until now has been Minister of Education) and Prime Minister Netanyahu were refused.

In other words, there is a whole political reality that is even more radical than both Netanyahu and even Bennett, who was considered extreme-right, one that really does speak of Jewish power, in an overtly fascist, literally Nazi, vein. And this ideology is poised to gain a central place in the Israeli government.

Not a slip of the tongue

As the Channel 13 coverage also notes, what we have heard here is no slip of the tongue:

“These statements have been repeated again for years at Bnei David. Not a slip of the tongue, but a set agenda.”

And Bnei David is not an isolated island. A similar story of a genocidal educator of security forces is rabbi Dov Lior from the settlement Kiryat Arba, who endorsed the book Torat Hamelech (‘King’s Torah’) of 2009, which advocates the killing of non-Jewish babies since “it is clear they will grow to harm us”. Lior has been teaching police forces in a special program for religious recruits called ‘Believers in the Police’. The authors of the book, by the way, are from the Od Yosef Chai Yesiva in the settlement of Yitzhar, a Yeshiva that received funds from Jared Kushner’s family’s foundation until 2011. Views of the Holocaust as a divine punishment for sinners have been expressed by the former chief Sephardic rabbi Ovadia Yosef, who also believed that the purpose of non-Jews is to serve Jews, and he likened non-Jews to donkeys.

It is possible that the above mentioned airing of shocking views may cause a certain temporary and local stir, but this ideology is deeply embedded, and now an integral part of a central Israeli political reality. It is clear that the rabbis treat this attention as a nuisance by liberals who have no understanding, and it is likely that they will regard this as an unfortunate ‘Azarya’ – like the soldier medic who was filmed murdering an incapacitated Palestinian at point blank range three years ago and had to spend some months in prison. The problem for Azarya’s supporters wasn’t the murder – but the video. And so these people may find ways to crawl out of this debacle, but they will continue believing in the righteousness of their Jewish supremacy.

Jonathan Ofir is an Israeli musician, conductor and blogger / writer based in Denmark.