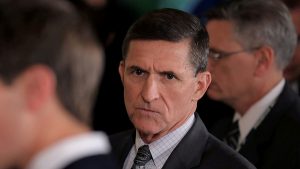 President Donald Trump’s former national security adviser, Michael Flynn, has turned himself in to the FBI. He pleaded guilty to charges of making false statements to the FBI about his conversation with the Russian ambassador in December 2016.

The charge was detailed in court documents unsealed on Friday. The document accuses Flynn of making “materially false, fictitious, and fraudulent statements” to law enforcement about a phone call he had with former Russian Ambassador to the U.S., Sergey Kislyak. The statements were made on January 24, four days after Trump was inaugurated.

Flynn, 58, pleaded guilty to the charge during a Friday morning hearing in Washington, DC.

Flynn resigned less than a month into Trump’s term, after the acting Justice Department head – who was subsequently fired for refusing to enforce a travel ban executive order – warned that he could be subjected to blackmail because his dealings with Russians hadn’t been disclosed.

At issue was the phone call between Flynn and Kislyak at the end of December 2016, after President Barack Obama ordered a number of Russian diplomats to leave the U.S. and closed two Russian diplomatic properties.

Flynn is specifically accused of falsely claiming that he did not ask Kislyak to “refrain from escalating the situation in response to sanctions that the United States had imposed against Russia that same day.” He is also accused of falsely telling agents that he “did not recall the Russian ambassador subsequently telling him that Russia had chosen to moderate its response to those sanctions as a result of his request.”

Flynn also told the FBI that he “did not ask the Russian ambassador to delay the vote on or defeat a pending United Nations Security Council resolution,” according to court documents.

U.S. intelligence services listened in on the phone call. Information about it was leaked to the media in January, after Trump’s inauguration. Flynn resigned in February.

In a statement on Friday, Flynn said he was falsely accused of treason and other outrageous acts, and that he made the decision to cooperate with the special counsel in the best interests of his family and the country.

The plea “clears the way for a prompt and reasonable conclusion” of the special counsel investigation, White House attorney Ty Cobb said on Friday, according to Reuters. [Weblink to Reuters report below.]

“I inadvertently briefed the Vice President Elect and others with incomplete information regarding my phone calls with the Russian Ambassador. I have sincerely apologized to the President and the Vice President, and they have accepted my apology,” Flynn wrote in his resignation letter.

After he stepped down, Flynn filed an updated foreign registration form which showed that he had not disclosed contacts and payments from foreign entities – specifically, the government of Turkey – while serving as Trump’s campaign adviser from February 2016.

If Michael Flynn’s ‘crime’ is all Robert Mueller has, it is time to move on, by James S. Robbins, opinion columnist, USA Today, Dec. 4, 2017

… We have come down quite a way from the hyperventilation about Russia “hacking the election” a year ago. What happened to Democratic Sen. Mark Warner’s claim, later promoted by Hillary Clinton, that there were 1,000 Russian agents planting anti-Hillary fake news stories in key swing states? Or that Russians had delivered Wisconsin to Trump? All the conspiracy theorists have so far are a few Facebook ads that can’t credibly be shown to have changed even one vote.

The hunting down of Michael Flynn, by Robert Parry, Consortium News, Dec 1, 2017

The Trump team definitely colluded with a foreign power—Just not the one you think, by Aaron Maté, published in The Nation, Tuesday, Dec 5, 2017

Why are the media paying scant attention to Michael Flynn’s admissions about Israel?

Why Flynn’s plea is a dead end for ‘Russiagate’ conspiracy

A court document signed by special counsel Robert Mueller, dated Thursday, specifies two instances of Flynn telling FBI investigators things that were not true. They relate to two conversations he had with Russian Ambassador Sergey Kislyak, in December 2016.

In the Statement of Offense signed by Flynn at his court appearance on Friday, he admitted to acting on instructions from a senior “Presidential Transition Team” (PTT) official, prompting breathless speculation if that was Trump himself, his son-in-law Jared Kushner, or someone else altogether. The one question nobody seems to be asking is, “So what?”

It is intuitively obvious to even the most casual observer that Flynn’s “crime” is a procedural one: he told FBI investigators he hadn’t done a thing that he actually did. But was the thing he did – namely, speak with the Russian ambassador to the U.S. – against the law? Not really.

Under the 1799 Logan Act, it is technically against the law for a private U.S. citizen to engage in diplomacy. However, only two people have ever been indicted under that law, and no one has ever been prosecuted. Flynn was a member of the presidential transition team whose duties involved contacts with foreign diplomats. So why would the FBI even ask him about his contacts with Ambassador Kislyak?

“There was nothing wrong with the incoming national security adviser’s having meetings with foreign counterparts or discussing such matters as the sanctions in those meetings,” Andrew McCarthy of National Review wrote on Friday.

Because Flynn was “generally despised by Obama administration officials,” McCarthy added, “there has always been cynical suspicion that the decision to interview him was driven by the expectation that he would provide the FBI with an account inconsistent with the recorded conversation – i.e., that Flynn was being set up for prosecution on a process crime.”

Back in May, former deputy Attorney General Sally Yates testified before the Senate Judiciary subcommittee that she came to the White House on January 26 – two days after Flynn’s FBI interview – to say that he had lied about his conversations with Kislyak. How did she know? That, she said, was “based on classified information.”

Clearly, Yates knew Flynn was lying about the conversations because U.S. intelligence had been listening in on them. An Obama administration official leaked that information to the Washington Post’s David Ignatius, who reported on the Flynn-Kislyak conversation on January 12, eight days before Trump’s inauguration.

Responding to that report, Vice President Pence said that Flynn’s conversation with Kislyak “had nothing whatsoever to do” with the Obama administration’s expulsion of Russian diplomats and closure of two diplomatic properties, enacted on December 29, 2016.

After the Post reported that the two did in fact discuss Obama’s sanctions, citing anonymous sources again, Flynn submitted his resignation.

The dark undertone of the Post’s reporting was that Flynn was somehow “subverting” Obama’s sanctions, intended as punishment for – alleged, and to this day unproven – Russian “meddling” in U.S. elections. What Flynn actually did, as documented by the special counsel, was to ask Russia not to escalate in response to Obama’s actions.

It worked, too: Russian President Vladimir Putin announced that Moscow would not expel any U.S. diplomats, but rather invite them to the Kremlin for holiday celebrations. It wasn’t until July, after the passage of an anti-Russian bill in Congress, that Putin ordered the U.S. to downsize its diplomatic staff in Russia by 755.

So what about the frantic insistence of “Russiagate” partisans that Flynn’s plea practically portends the downfall of the president they refuse to accept as legitimate? Their elation is unwarranted and premature, warns McCarthy. If a prosecutor has a cooperating witness who is an accomplice in a criminal scheme, the plea is structured so it proves the existence of the scheme.

“That is not happening in Flynn’s situation. Instead, like Papadopoulos, he is being permitted to plead guilty to a mere process crime,” he wrote, referring to a volunteer Trump campaign adviser who likewise pleaded guilty to lying to the FBI about seeking contacts with (a nonexistent) “Putin’s niece.”

Flynn’s plea did include an admission he failed to report activities undertaken on behalf of a foreign government: Turkey, a key NATO ally of the U.S. [End article.]

The hunting down of Michael FlynnRussia 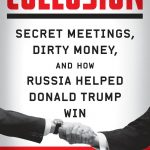