Two weeks ago, the Washington Post published an editorial saying that the governments of the NATO military alliance are being too soft on Russia over the crisis in Ukraine. The editors want even more aggressive support to the governing regime in Kyiv than what is already being given. 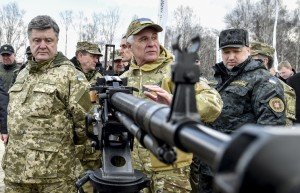 In particular, the newspaper objects to the ceasefire agreement that it says beleaguered Kyiv was pressured to sign in Minsk, Belarus on February 12, 2015 (date corrected). The editorial was headlined, ‘Putting Ukraine in an untenable position’ and its reads, “Yet now the German and French governments have enlisted the help of the Obama administration in seeking unilateral Ukrainian compliance with Minsk 2’s onerous political terms, which if fully implemented would implant a Russian-controlled entity inside Ukraine’s political system.”

The editors of the Post are pulling off a ruse. Kyiv has not abided by a single clause of Minsk-2, and the regime’s foreign backers, including in the editorial offices of nearly all of Western media, keep a careful silence on the subject.

Points ten, eleven and twelve of the Minsk-2 agreement read as follows

10. Pullout of all foreign armed formations, military equipment, and also mercenaries from the territory of Ukraine under OSCE supervision. Disarmament of all illegal groups.

So the obligations are clear, but they are being utterly disregarded by Kyiv and, as we see, by its foreign backers.

The Post‘s editorial is also a clear example of the ‘two worlds, two realities’ which prevail in the world today over the Ukraine crisis. One view sees an extreme, right-wing government in Kyiv waging a civil war against a population in the east of Ukraine which rejects Kyiv’s anti-Russia, intolerant nationalism and Kyiv’s pro-austerity embrace of the European Union. The opposite view sees ongoing Russian “invasions”, “occupations” and intervention in Ukraine. Most regretfully, the latter view is shared by a sizable body of liberal, social democratic and even pseudo-Marxist opinion in the West.

The Post editorial describes the present situation in eastern Ukraine as follows: “[Russia’s] forces continue to shell and rocket Ukrainian positions on a daily basis. Far from pulling back heavy weapons or withdrawing its troops as required by the agreement, it has built military bases and deployed 9,000 troops inside Ukraine and stationed another 50,000 just outside the border, according to Ukrainian and NATO officials.”

Funny, on the Post‘s extensive ‘Ukraine crisis‘ compilation of articles, one searches in vain for a single news report confirming the editors’ claims of Russian military intervention in eastern Ukraine, including alleged shellings and bombardments. The closest we get to that are reports by Post journalists embedded with the Ukrainian army. But their reports do not come close to verifying the editors’ claims; they consist merely of war-tourism style observations and photos.

So let’s pause for a moment to reflect. The Washington Post (and some other mainstream media) publishes articles and photo stories by journalists in and around Kyiv-controlled eastern Ukraine. But the Post‘s journalists can’t seem to provide examples of how “Russia’s forces continue to shell and rocket Ukrainian positions on a daily basis”. Surely, if the situation is that severe, there must be no shortage of visual examples to provide to readers? And surely the U.S. government can provide satellite images to mainstream media of the “9,000 Russian soldiers” in eastern Ukraine as well as other examples of Russian intervention?

Unless… it’s all, or mostly, make believe.

On the rebel side of eastern Ukraine, there is no shortage of examples of grim, daily shelling by Ukrainian armed forces, which are backed by NATO. Alas, and not by accident, such reports never, ever grace the pages of the Western media.

The blind, anti-Russia stand of the Washington Post is shared by the parties of the political mainstreams in the United States and Canada.

The New Cold War.org website has recently reported the pro-war views of the leader of the social-democratic New Democratic Party. Tom Mulcair presented his views to the first televised debate of the federal election in Canada on August 6. “We are proud members of NATO,” he declared. Mulcair criticized Canadian Prime Minister Stephen Harper for not adding even more Russian government and business leaders on the government’s war-threatening sanctions list. (The Canadian election will take place on October 19.)

Concerning the Liberal Party in Canada, it appreciates and backs the Harper government’s support of Kyiv, but it also criticizes both the government and the NDP for being too soft on Russia and the “pro-Russian separatists” in eastern Ukraine. 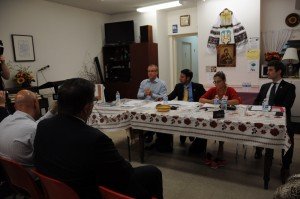 Key ideologues of Liberal Party foreign policy spoke to a public forum on Ukraine in Toronto on August 11. You can view excerpts of the forum here on YouTube, and you can read a favourable print report of the event here. A key demand on the Liberal Party wish-list for Ukraine is that the Canadian government begin to provide heavy weaponry to the Ukrainian army.

One of Canada’s better-known journalists, Dianne Francis, provides a particularly zany version of the “soft on Russia” argument in an article published by the neo-conservative Atlantic Council on August 17. She writes: “World attention focuses on ISIS and Iran, with its half an atomic weapon. But the biggest geopolitical issue is Vladimir Putin, backed by thousands of nuclear weapons, who is gradually conquering Ukraine, a democracy with 45 million people the size of Germany and Poland combined.

“In just over a year, Russia has seized nine per cent of Ukraine, killed 6,200, wounded 30,000, displaced 1.38 million people and shot down a commercial airliner with 298 people aboard.

“Even so, European and American retaliation has been soft, and ineffective…”

Only last month, Francis published several articles praising as heroes Ukraine’s extreme-right and neo-Nazi paramilitary battalions. She is Distinguished Professor at the Ted Rogers School of Management at Ryerson University in Toronto and a former editor at the National Post.

Canada is already providing military training to Ukraine’s army, along with non-lethal (sic) military equipment and spying and communication equipment and data. The government and the media support or turn a blind eye to the fundraising going on in Canada by Ukrainian ultranationalists for the purchase of military equipment for Kyiv’s civil war. Some of the purchased or supplied equipment serves the ongoing shelling of civilian areas of eastern Ukraine.

The Minsk-2 ceasefire provides a roadmap to end the hostilities in eastern Ukraine. A real ceasefire could open the road to resolution of the large social, economic and political issues that have split Ukraine politically and driven a sizable portion of its population into revolt. But to achieve that, two significant things are required. There must be political change at the top in Kyiv-controlled Ukraine, and the cheering for war coming from Western capitals and editorial offices must cease.

Roger Annis is an editor of the website The New Cold War: Ukraine and beyond. In April 2015, he participated in a reporting tour to Donetsk, eastern Ukraine. 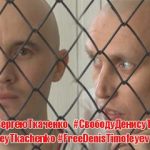