With Cold War II in full swing, the New York Times is dusting off what might be called McCarthyism II, the suggestion that anyone who doesn’t get in line with U.S. propaganda must be working for Moscow, reports Robert Parry. 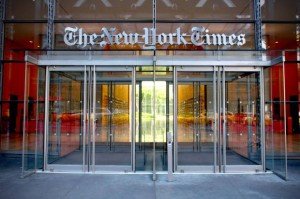 Perhaps it’s no surprise that the U.S. government’s plunge into Cold War II would bring back the one-sided propaganda themes that dominated Cold War I, but it’s still unsettling to see how quickly the major U.S. news media has returned to the old ways, especially the New York Times, which has emerged as Official Washington’s propaganda vehicle of choice.

What has been most striking in the behavior of the Times and most other U.S. mainstream media outlets is their utter lack of self-awareness, for instance, accusing Russia of engaging in propaganda and alliance-building that are a pale shadow of what the U.S. government routinely does. Yet, the Times and the rest of the MSM act as if these actions are unique to Moscow.

A case in point is Monday’s front-page story in the Times entitled “Russia Wields Aid and Ideology Against West to Fight Sanctions,” which warns: “Moscow has brought to bear different kinds of weapons, according to American and European officials: money, ideology and disinformation.”

The article by Peter Baker and Steven Erlanger portrays the U.S. government as largely defenseless in the face of this unprincipled Russian onslaught: “Even as the Obama administration and its European allies try to counter Russia’s military intervention across its border, they have found themselves struggling at home against what they see as a concerted drive by Moscow to leverage its economic power, finance European political parties and movements, and spread alternative accounts of the conflict.”

Like many of the Times’ recent articles, this one relies on one-sided accusations from U.S. and European officials and is short on both hard evidence of actual Russian payments – and a response from the Russian government to the charges. At the end of the long story, the writers do include one comment from Brookings Institution scholar, Fiona Hill, a former U.S. national intelligence officer on Russia, noting the shortage of proof.

“The question is how much hard evidence does anyone have?” she asked. But that’s about all a Times’ reader will get if he or she is looking for some balanced reporting.

Still, the more remarkable aspect of the article is how it ignores the much more substantial evidence of the U.S. government and its allies themselves financing propaganda operations and supporting “non-governmental organizations” that promote the favored U.S. policies in countries around the world.

Plus, there’s the failure to recognize that many of Official Washington’s own accounts of global problems have been riddled with propaganda and outright disinformation.

For instance, much of the State Department’s account of the Aug. 21, 2013 sarin attack in Syria turned out to be false or misleading. United Nations inspectors discovered only one rocket carrying sarin – not the barrage that U.S. officials had originally alleged – and the rocket had a much shorter range than the U.S. government (and the New York Times) claimed. [See Consortiumnews.com’s “NYT Backs Off Its Syria-Sarin Analysis.”]

Then, after the Feb. 22, 2014 U.S.-backed coup in Ukraine, the U.S. government and the Times became veritable founts of propaganda and disinformation. Beyond refusing to acknowledge the key role played by neo-Nazi and other right-wing militias in the coup and subsequent violence, the State Department disseminated information to the Times that later was acknowledged to be false.

In April 2014, the Times published a lead story based on photographs of purported Russian soldiers in Ukraine but had to retract it two days later because it turned out that the State Department had misrepresented where a key photo was  taken, destroying the premise of the article. [See Consortiumnews.com’s “NYT Retracts Ukraine Photo Scoop.”]

And sometimes the propaganda came directly from senior U.S. government officials. For instance, on April 29, 2014, Richard Stengel, under secretary of state for public diplomacy, issued a “Dipnote” that leveled accusations that the Russian network RT was painting “a dangerous and false picture of Ukraine’s legitimate government,” i.e., the post-coup regime that took power after elected President Viktor Yanukovych was driven from office. In this context, Stengel denounced RT as “a distortion machine, not a news organization.”

Though he offered no specific dates and Times for the offending RT programs, Stengel did complain about “the unquestioning repetition of the ludicrous assertion … that the United States has invested $5 billion in regime change in Ukraine. These are not facts, and they are not opinions. They are false claims, and when propaganda poses as news it creates real dangers and gives a green light to violence.”

However, RT’s “ludicrous assertion” about the U.S. investing $5 billion was a clear reference to a public speech by Assistant Secretary of State for European Affairs Victoria Nuland to U.S. and Ukrainian business leaders on Dec. 13, 2013, in which she told them that “we have invested more than $5 billion” in what was needed for Ukraine to achieve its “European aspirations.” [See Consortiumnews.com’s “Who’s the Propagandist: US or RT?”]

One could go on and on about the U.S. government making false or misleading claims about these and other international crises. But it should be clear that Official Washington doesn’t have clean hands when it comes to propaganda mud-slinging, though you wouldn’t know that from the Times’ article on Monday.

And, beyond the U.S. government’s direct dissemination of disinformation, the U.S. government also has spread around hundreds of millions of dollars to finance “journalism” organizations, political activists and “non-governmental organizations” that promote U.S. policy goals inside targeted countries. Before the Feb. 22, 2014 coup in Ukraine, there were scores of such operations in the country financed by the National Endowment for Democracy. NED’s budget from Congress exceeds $100 million a year.

But NED, which has been run by neocon Carl Gershman since its founding in 1983, is only part of the picture. You have many other propaganda fronts operating under the umbrella of the U.S. State Department and its U.S. Agency for International Development. Last May 1, USAID issued a fact sheet summarizing its work financing friendly journalists around the world, including “journalism education, media business development, capacity building for supportive institutions, and strengthening legal-regulatory environments for free media.”

USAID estimated its budget for “media strengthening programs in over 30 countries” at $40 million annually, including aiding “independent media organizations and bloggers in over a dozen countries,” In Ukraine before the coup, USAID offered training in “mobile phone and website security”.

USAID, working with billionaire George Soros’s Open Society, also funds the Organized Crime and Corruption Reporting Project, which engages in “investigative journalism” that usually goes after governments that have fallen into disfavor with the United States and then are singled out for accusations of corruption. The USAID-funded OCCRP also collaborates with Bellingcat, an online investigative website founded by blogger Eliot Higgins.

Higgins has spread misinformation on the Internet, including discredited claims implicating the Syrian government in the sarin attack in 2013 and directing an Australian TV news crew to what appeared to be the wrong location for a video of a BUK anti-aircraft battery as it supposedly made its getaway to Russia after the shoot-down of Malaysia Airlines Flight 17 in 2014.

Despite his dubious record of accuracy, Higgins has gained mainstream acclaim, in part, because his “findings” always match up with the propaganda theme that the U.S. government and its Western allies are peddling. Though most genuinely independent bloggers are ignored by the mainstream media, Higgins has found his work touted.

In other words, whatever Russia is doing to promote its side of the story in Europe and elsewhere is more than matched by the U.S. government through its direct and indirect agents of influence. Indeed, during the original Cold War, the CIA and the old U.S. Information Agency refined the art of “information warfare”, including pioneering some of its current features like having ostensibly “independent” entities and cut-outs present the propaganda to a cynical public that rejects much of what it hears from government but may trust “citizen journalists” and “bloggers”.

To top off this modern propaganda structure, we now have the paper-of-record New York Times coming along to suggest that anyone who isn’t disseminating U.S. propaganda must be in Moscow’s pocket. The implication is that now that we have Cold War II, we can expect to have McCarthyism II as well. 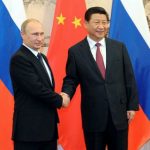 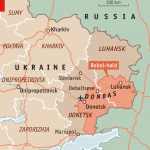 Ukraine: what remains of Minsk?Background, Ukraine