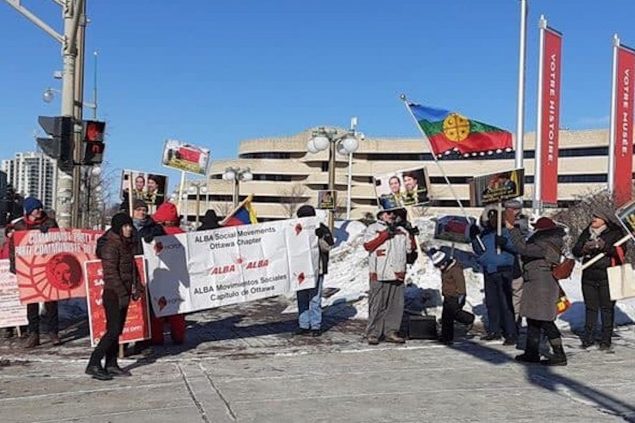 A new Lima Group meeting was held in Ottawa, Canada on February 20, 2020, in yet another attempt to revive the regime change operation engineered by the US against President Nicolas Maduro. The Orinoco Tribune interviewed Pierre LeBlanc, one of the organizers of a number of spontaneous protests held against this meeting.

On Thursday February 20, 2020, a new Lima Group meeting was held in Ottawa, Canada in yet another attempt to revive the regime change operation engineered by the US against President Nicolas Maduro. The Orinoco Tribune interviewed Mr. Pierre LeBlanc, one of the organizers of a number of spontaneous protests held against this meeting.

We livestreamed the interview on OT’s Facebook page but experienced technical difficulties that forced us to split the interview into segments. For some reason, the last segment had video and audio issues, so we are reconstructing this interview in print to the best of our ability. During the preparation of this report, we realized that LeBlanc’s audio responses on the first two videos also could not be heard.

But the technical problems won’t affect our commitment to journalism and to present under-represented voices. Below, we reproduce, to the best of our ability, the most important issues raised in conversation with our Canadian interviewee. 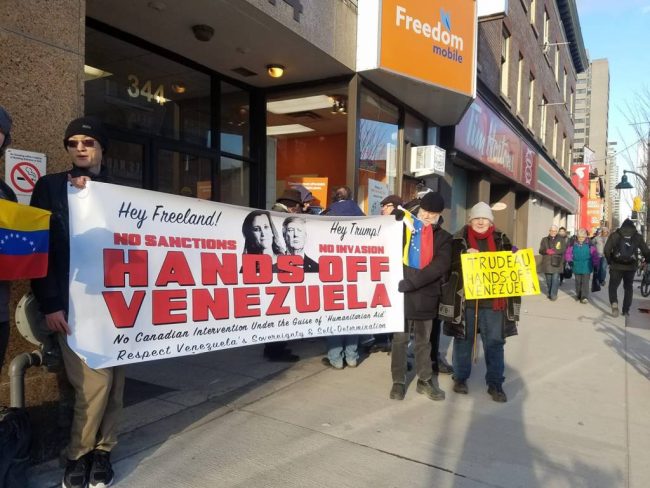 In response to a question about the organization of this demonstration, Pierre LeBlanc pointed out that this is not the first time the Lima Group meets in Canada and that he and others had already organized a protest on February 4, 2019, that disrupted the meeting and got broad, international media attention. The coverage also put the Lima Group members and Canada’s Foreign Minister, Chrystia Freeland, on the defensive. He also mentioned that, in spite of the late notice and the secretive organization by Canadian authorities designed to prevent local opposition, the protestors managed to not only organize a protest in Ottawa but also demonstrations and actions in other Canadian cities. In freezing weather conditions, even by Canadian standards.

When asked about the outcome of the Lima Group meeting, LeBlanc highlighted that they had the impression that this particular meeting showed significant cracks in the unity among Lima Group Foreign Ministers, especially in terms of the level of support that should be provided to Guaidó himself and also around the strategy that should be adopted going forward. In the end, the member countries could only agree on trying to convince other countries to join them in mounting an intervention to save Venezuela. The weakness of this posture is an eloquent admission of failure. Perhaps that now that Canada is coming near to a standstill due to Indigenous and environmental concerns, the Lima Group could lobby other countries to carry out an intervention in Canada. This statement of course is as ridiculous for Venezuela as it is ridiculous for Canada.

At that point, we had our first noticeable technical problem. We didn’t realize then that the audio had cut out while Pierre LeBlanc continued elaborating on the lack of results from this Lima Group meeting.

LeBlanc’s perspective was shared by Jesus Rodriguez-Espinoza, editor of the Orinoco Tribune, in terms of a noticeable sense of desperation when reading the outcome report of this Lima Group meeting. He added that it was very understandable that they are feeling the disappointment of failure because these countries have been involved for more than a year in the regime change operation lead by the US using Juan Guaidó as their star. They seemed at a loss about what to do next. The US of course, supported by Canada, has been trying to overthrow the Bolivarian Government for 20 years, including the failed coup d’État in 2002. The fact that Guaidó himself is fast losing ground among his own right-wing opposition amid his numerous financial and para-military scandals is seeding doubt among the Lima Group countries and cooling down their resolve to act.

From there we addressed the fourth question, how LeBlanc sees the Canadian solidarity movement in relation to Venezuela, but also in general terms.

In LeBlanc’s opinion, the solidarity movement in Canada in relation to international issues in general, and to Latin America in particular, is not very strong at this time. He believes there are some issues that attract youth the most, like environmentalism or the indigenous struggle like the recent one of the Wet’sowet’en Nation which has paralyzed railroads across Canada in recent days and weeks.

We asked LeBlanc how Canadians see Venezuela. We also compared it to our own experience with how US citizens see not only Venezuela but any other country outside the US, and the US-egocentrism of the American way of life, but also recognizing some exceptional cases of human rights activists that are active all over the US.

LeBlanc shared that from his perspective, Canadians are more aware of their surroundings than US citizens and they have a better understanding of how the world is and works outside their country’s boundaries. At the same time, they are subjected to the same lifestyle and MSM bombardment; thus at times, the viewpoints of some of them align with the dominant US way of seeing the world.

Lastly, we asked LeBlanc about the Wet’suwet’en Nation struggles in the context of comments by Canadian Foreign Affairs Minister Champagne, who according to some media coverage, said that Venezuela is in the middle of an humanitarian and environmental crisis. Of course, Venezuela can be damned with an exaggerated environmental campaign as a pretext for a friendly coup d’État. Meanwhile according with this conceit, Canada does not have a human rights, indigenous or environmental crisis, because its trains air running so well. In fact, Canada’s rail system is almost completely shut down right now by indigenous and environmental blockades of railroads, seaports, international bridges and main streets.

Something upstanding Minister Champagne seeks to downplay, while he misleadingly slams Venezuela.

OT’s editor indicated that Minister Champagne’s comment seems very much of a double standard, taking into account the whole Wet’suwet’en Nation crisis. Secondly, the editor shared his assessment that the Canadian Government and the Lima Group might be trying to weaponize new tactics involving linking the recent Guaidó international support building tour and his hysterical criticisms of Venezuelan sales of gold the necessity to overthrow Maduro by whatever means necessary. This line of attack conceived in Washington then tries to link the Middle East and Hezbollah terrorism to the old deception of supposed terrorism by the Bolivarian government in Venezuela. But the editor added this tactic might also be an attempt to resuscitate the attacks on the Orinoco Arc (the mining initiative launched by President Maduro to put some order in mining exploitation in the southern part of Venezuela).

On this particular issue, LeBlanc reminded us about how important mining is for Canada’s corporate sector (75 % of mining companies active in Latin America are Canadian) and of all the history of mining related environmental abuses committed by Canadian corporations all over the world. Canadian mines are notorious for forcibly moving communities off their land, hiring mercenaries often using deadly force under the guise of security and, jointly with Canadian diplomats, forcing countries to make their mining laws more open to human rights and environmental abuses and to savage, no-limit exploitation of peoples lands and natural wealth.

LeBlanc said that the drive to resource extraction is key to Canada’s enthusiastic participation in regime change attempts against Chavismo and to Canada’s involvement against Evo Morales and the Indigenous people of Bolivia. He also mentioned that in the Wet’suwet’en Nation protest, you can clearly see a coming together of indigenous peoples all over the country defending their land against encroachment on their national sovereignty, from further human rights abuses and from already very reall environmental crises. The big oil, gas and other projects affect in the first instance these vulnerable groups so mistreated by Canada for centuries, despite some attempts at reconciliation in recent years by the Trudeau administration.

LeBlanc remarked on the importance of this protest and the major impact it has had for Canadians that have seen a semi-paralysis of economic activities in some sectors due to the protests in support of the indigenous movements that reject the construction of the Coastal GasLink blocking rail transport in much of Canada.

He mentioned that in narrow legal terms, the project was approved by some leaders among the indigenous tribes affected and by the government, but in the end the elders in indigenous law have the last word because their domain over the land has never been relinquished by treaty. The Wet’suwet’en have triggered a national solidarity movement that goes beyond Indigenous Nations, gender, race and age. And that has been joined and energetically supported by the Canadian Environmental Movement. Time will tell whether this large merging of indigenous and environmental “fighters” will outlive the coming wave of repression from Canada’s corporations, banks and government s. For the time being, they have upset the political apple cart and exposed the hypocrisy of the Trudeau government’s claims toward Venezuela. The courage and resilience of the Venezuelan people will serve as an example of how Canadian progressive resistance groups can coalesce, hold their positions and succeed in generating lasting change.

Pierre LeBlanc is a Canadian international expert on human rights with extensive expertise on Israel, Palestine, Macedonia and Lebanon. He was also an Official International Elections Observer in the latest Venezuelan presidential elections held in May 2018.