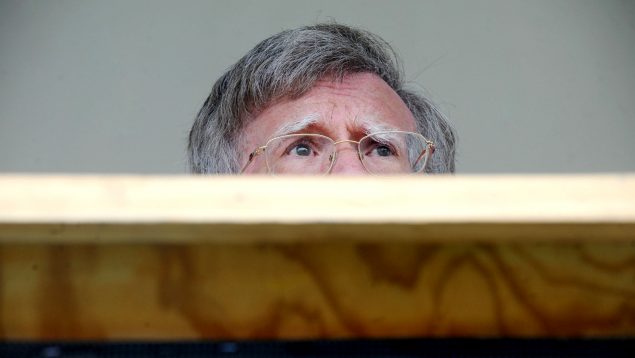 Bolton’s willingness to bring Syria and Iraq into the fray along with Iran betrays the fact that he is not just seeking regime change in individual countries but seeking to remake the Middle East as a whole.

In 2017, less than a year before he became national security advisor, John Bolton promised a gathering of the Mujahedeen Khalq (MEK) that:

The declared policy of the United States should be the overthrow of the mullahs’ regime in Tehran. … The behavior and the objectives of the regime are not going to change and, therefore, the only solution is to change the regime itself. … And that’s why, before 2019, we here will celebrate in Tehran!”

While some may have thought Bolton’s statements of regime change in Iran before 2019 were just more bellicose rhetoric from a well-known Iran hawk, a report published Sunday in the Wall Street Journal has revealed that Bolton did everything within his power to push for President Donald Trump to launch a military attack on Iran.

According to the Journal, Trump’s national security team – which is led by Bolton – requested that the Pentagon develop “far-reaching military options to strike Iran” last September after Shia militias in Iraq fired three mortars at the U.S. embassy and diplomatic compound in Baghdad. As the report noted, the shells “landed in an open lot and harmed no one,” but the group that fired them is alleged to have ties with Iran.

This incident, though minor, notably took place amid considerable unrest in the Iraqi city of Basra and during competing efforts by the U.S. and Iran to influence the formation of Iraq’s next national government.

Nevertheless, the minor nature of the incident was apparently the perfect pretext for Bolton and others on the national security team – which Bolton has been stocking with war hawks for much of the past year – to push for a military strike on Iran, something Bolton himself has long sought, as evidenced by his numerous speeches and editorials calling for preemptive bombing of the Islamic Republic.

For instance, in one meeting, Mira Ricardel – then serving as Bolton’s ultra-hawkish deputy national security advisor – described the attacks in Iraq as “an act of war” and said the U.S. had to respond decisively. Ricardel is also a member of the Council on Foreign Relations and a former executive of U.S. weapons-maker Boeing but left her post last November as result of friction with First Lady Melania Trump.

In addition, during those meetings, the Journal noted that Bolton did not even attempt to hide his real motivations, as he “made it clear that he personally supports regime change in Iran, a position he aggressively championed before joining the Trump administration, according to people familiar with the discussions.”

As a result of those meetings, the Bolton-led National Security Council pushed for an attack plan on Iran so brazen that it deeply concerned Pentagon and State Department officials. One former senior U.S. administration official told the Journal that the request “definitely rattled people” and added that “people were shocked. It was mind-boggling how cavalier they were about hitting Iran.”

In other words, using a remarkably minor incident as a pretext, the Bolton-led group of hawks that compose the majority of Trump’s National Security Council (NSC) was preparing to launch a full-scale regime-change war on Iran. To make matter worse, the Journal also reported that the Pentagon had “complied with the NSC’s request to develop options for striking Iran,” meaning that Bolton and his team now have a range of Pentagon-developed strategies for bombing Iran at their fingertips.

Bolton ‘s push to bomb Iran last September over such a minor incident may seem strange, but Bolton’s history makes it clear that he has long sought any excuse – from the minor to the non-existent – to justify waging war against Iran’s current government.

As MintPress reported last year, Bolton’s past indicates a near obsession with clearing the way for U.S. military action against Iran. As journalist Gareth Porter has noted, while Bolton was the Bush administration’s key policymaker on Iran, he — by flouting State Department protocol and taking several unannounced trips to Israel — “actively conspired … to establish the political conditions necessary for the administration to carry out military action” against Iran.

Not only that, but Bolton’s behind-the-scenes dealings — using fabricated evidence, provided to him by an Iranian terrorist group that Bolton still openly supports, to convince the United Nations that Iran was secretly developing a nuclear weapon — led Iran’s nuclear program to become a matter overseen by the United Nations Security Council, as opposed to the International Atomic Energy Agency (IAEA). Since becoming national security advisor, Bolton has continued to make this claim — as recently as last week — despite its having been rejected by the U.S. intelligence community repeatedly since 2007.

The terror group relied on by Bolton, Mujahedeen Khalq (MEK), was listed as a “Foreign Terrorist Organization” by the United States government from 1997 and 2012 and, in the past, has conducted terror acts to accomplish its goals, killing Iranians as well as Americans in the process. More recently, MEK has worked with Israeli Intelligence to murder Iranian scientists. Since its removal from the government’s terror group list after an extensive lobbying effort that targeted prominent U.S. politicians, MEK has sought to reinvent itself as a “moderate” Iranian opposition group even though it has next to no support within Iran and has consistently beencharacterized as both “cultish” and “authoritarian.”

It was to this very group that Bolton had promised regime change in Tehran in 2019, a promise he ultimately failed to keep, but not for lack of trying.

“Sunni-stan,” partition, and a Middle East rebuilt to suit

Another highly significant revelation of the Journal’s report, which has been largely overlooked, is that the plans for “military options” that Bolton and his team requested from the Pentagon also included strategies for launching strikes, not just in Iran, but in Syria and Iraq. As the report noted, “the National Security Council asked the Pentagon to provide the White House with options to respond with strikes in Iraq and Syria as well, according to people familiar with the talks.”

Bolton’s willingness to bring Syria and Iraq into the fray betrays the fact that he is not just seeking regime change in individual countries but seeking to remake the Middle East as a whole. Indeed, both Syria and Iraq have long been in Bolton’s crosshairs, as evidenced by his 2015 editorial in the New York Times where he calls for the partition of both countries in order to benefit the United States, Israel and “friendly Arab” states like Saudi Arabia.

Bolton’s partition plan involves the creation of a Sunni state out of northeastern Syria and western Iraq, which he nicknames “Sunni-stan.” He asserts that such a country has “economic potential” as an oil producer, would be a “bulwark” against the Syrian government and “Iran-allied Baghdad,” and would help defeat Daesh (ISIS).

Bolton’s mention of oil is notable, as the proposed area for this Sunni state sits on key oil fields that U.S. oil interests, such as ExxonMobil and the Koch brothers, have sought to control if the partition of Iraq and Syria comes to pass. Also notable is the fact that the area of Syria Bolton mentions is the area currently being illegally occupied by the United States. This could well be a driving factor in Bolton’s desire to delay or prevent the U.S. troop withdrawal in northeastern Syria.

However, the most notable part of the Bolton’s editorial calling for the creation of “Sunni-stan” is that he mentions exactly who would benefit from this partition, and it certainly isn’t the Syrians or the Iraqis. “Restoring Iraqi and Syrian governments to their former borders,” Bolton writes, “is a goal fundamentally contrary to American, Israeli and friendly Arab state interests.” In other words, allowing the Syrian government to return to its former borders is “contrary” to the interests of the nations that Bolton supports and that he seeks to make the dominant powers in the Middle East through his aggressive policy for the region.

With Bolton and his team on the National Security Council armed with the tools to bomb both Syria and Iran, it’s only a matter of time before Bolton finds the perfect pretext to begin enacting his vision for a “new” Middle East, most likely starting with Iran.