On January 14, 2016, the online Ukrainian publication Strana.ua published on its website an article entitled ‘The authorities are preparing a strategic blow to freedom of expression,’ warning that the Security Service of Ukraine (SBU) intended to search the editorial offices of the newspaper. The SBU is also fabricating a criminal case against the founder of the newspaper, Igor Guzhva. 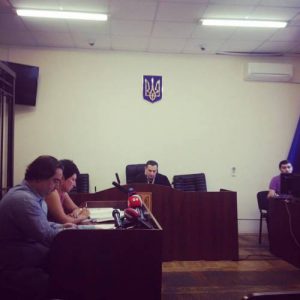 The SBU has been after Igor Guzhva since 2014 when Guzhva was the head of the Russian language media holding Vesti that was known for its critical articles towards the Kyiv regime. The SBU opened a criminal investigation into the publication of several articles in the magazine ‘Vesti.Reporter’, which was part of the media holding. According to the SBU, these articles contained calls to violate the territorial integrity of Ukraine. In September of 2014, the SBU searched the office of the media holding. The articles were subjected to several media expertise, which failed to show the presence of incitation to “separatism” because there were none.

Guzhva is affiliated with the Opposition Bloc in the Ukrainian Parliament, which was formed by former members of the Party of Regions. Before the creation of Strana.ua and the media holding Vesti, Guzhva was the chief editor of the newspaper Segodnya, whose owner, the richest Ukrainian oligarch Rinat Akhmetov from Donetsk, broke with Guzhva because of the critical attitude of Guzhva to former President Viktor Yanukovych. The owner of the media holding Vesti, Alexander Klimenko (former Minister of Taxes and Levies under Yanukovych), parted with Guzhva because Guzhva criticized the new Ukrainian president Petro Poroshenko.

Strana.ua, which Igor Guzhva founded in February of 2015, became one of the main Russian-speaking publications in Ukraine, known for its high-quality journalism and objective information. The online journal exposes the corruption of Ukrainian power holders. It checks tax declarations of the deputies of the Verkhovna Rada and members of the Ukrainian government, it publishes investigations into power holders’ real assets and unmasks financial frauds, accompanying its investigations by copies of documents and photos. Many materials focused on the property of the President of Petro Poroshenko, Minister of Internal Affairs Arsen Avakov and other top officials.

In November-December of 2016, Strana.ua published the fullest material to date on the corruption in the highest echelons of the Ukrainian political elite. These materials were provided by the deputy of the Verkhovna Rada, Oleksandr Onyshchenko, who fled Kyiv and now lives in a political exile in London. Among other facts, Onyshchenko stated that President Poroshenko hired a broker to bribe deputies of the Verkhovna Rada and buy their political support.

According to Strana.ua, a source in the SBU indicated that the SBU is specifically targeting Igor Guzhva as the chief editor. They want to arrest him. That is why the SBU reopened the criminal case of 2014, under which Guzhva was accused under an article of the Criminal Code of Ukraine, namely, encroachment on the territorial integrity of Ukraine committed on preliminary arrangement by a group of persons. This article provides arrest as a measure of restraint. Dozens of people, human rights defenders, journalists, public figures have been arrested by the current Kyiv regime under this article. Since July 2015, the SBU has interrogated dozens of people, according to Strana.ua. All of them were asked the same question: ‘Do you know of any wrongdoings by Guzhva?’ The SBU failed to collect any coherent evidence against Guzhva.

The publication of the Onyschchenko materials uncovering corruption of President Petro Poroshenko provoked strong dissatisfaction by the Presidential Administration. According to Strana.ua, an order was given to the SBU to finish its job. Searches of the publication were planned in the editorial office, to be followed by notification of suspicion and arrests.

After Strana.ua made a public statement on January 14 of the impending attack by the authorities, the SBU was quick to issue a statement that no searches were planned.

Strana.ua sees this attack as part of the general course of the current leadership of Ukraine to suppress democratic freedoms in the country. Indeed, the current Kyiv regime, led by oligarch and media mogul Petro Poroshenko, understands all too well the crucial importance of the mass media in political and social processes. It tries either to control the media or to influence it by using the SBU or by blackmailing the owners. In the Orwellian reality of post-Euromaidan Ukraine, the truth is defined and sanctioned at the top.

Background:
Did Kyiv silence Ukraine’s biggest opposition newspaper, Vesti?, two-part article published by Ukraine Comment, Oct 15 and Oct 17, 2015, part one here.  (In 2015, Igor Guzhva was pressured and investigated by Ukrainian police while editor-in-chief of Vesti. As a result, he sold his shares in that media outlet and resigned at editor-in-chief.)