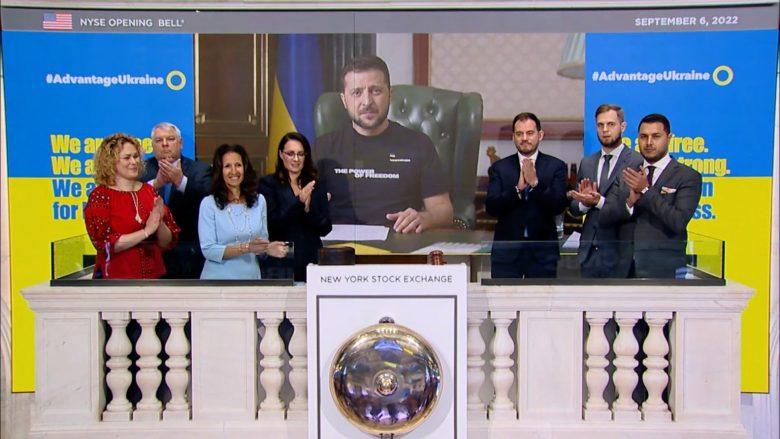 Zelensky announced that his country is “open for business” – that is to say, that foreign corporations are free to come and exploit its plentiful resources and low-paid labor.

In a speech launching the neoliberal selloff program Advantage Ukraine, Zelensky offered Wall Street “a chance for you to invest now in projects worth of hundreds of billions of dollars.”

The financial news service Business Wire published a press release from the Ukrainian government in which Zelensky boasted:

The $400+ [billion] in investment options featured on AdvantageUkraine.com span public private partnerships, privatization and private ventures. A USAID-supported project team of investment bankers and researchers appointed by Ukraine’s Ministry of Economy will work with businesses interested in investing.

It also quoted the president of NYSE Group, Lynn Martin, who said:

As the largest exchange globally, we stand for freedom, investor protection and unfettered access to capital. We are pleased to welcome President Zelenskyy virtually to the NYSE bell podium, a symbol of the freedom and opportunity our U.S. capital markets have enabled around the globe. We are honored the President has chosen the NYSE to mark the kickoff of Advantage Ukraine and engage with the world’s business community.

The press release cited executives of US corporate giants Google, Alphabet, and Microsoft, who salivated over the economic possibilities offered by Ukraine.

Zelensky coordinated his New York Stock Exchange publicity stunt with an editorial in the Wall Street Journal imploring US capitalists to “Invest in the Future of Ukraine.”

“I committed my administration to creating a favorable environment for investment that would make Ukraine the greatest growth opportunity in Europe since the end of World War II,” Zelensky wrote.

To create a safe, transparent environment for business engagement, Ukraine is pursuing investment guarantees from both the Group of Seven and the European Union, reforming the country’s tax system, and establishing a strong new legal framework. Our country has already adopted rules and laws to allow companies to build transparent corporate structures, attract foreign investment more easily, and use additional mechanisms to protect intangible assets. Favorable conditions will allow us to establish Ukraine as a powerful IT hub and implement innovative business ideas quickly and effectively.

Ukraine is a land of surprising opportunity. I personally invite you to be surprised by our potential and to invest in the future of Ukraine, writes @ZelenskyyUa https://t.co/sWGpAyQhKq

Multipolarista previously reported on a meeting by Western governments and corporations in Switzerland in July in which they planned harsh neoliberal economic policies to impose on Ukraine.

In an interview with Multipolarista, economist Michael Hudson compared the new emergency anti-labor laws imposed by the Ukrainian government to the brutal neoliberal policies implemented by Chile’s far-right Pinochet dictatorship after a CIA-backed coup in 1973.

“It’s jaw dropping,” Hudson said of Zelensky’s Wall Street Journal op-ed. “It’s like a parody of what a socialist would have written about how the class war would be put in into action by a fascist government.”

“So of course he was welcomed on the stock exchange for abolishing labor’s rights,” Hudson added. “You could not have a more black-and-white example” of class war.

“This is exactly what [French President] Macron said when he said the ‘end of abundance.’ The Ukrainian labor force has just experienced the end of affluence, neoliberal style.

“And as Mr. Zelensky said, it may be the end of affluence for the labor force, but it’s going to be a bonanza for you investors in the New York Stock Exchange. Come on in and join the party!”

“Somebody’s loss is turned into somebody else’s game. And that’s what happens in a class war. It’s a zero-sum game. There is no attempt at all to raise living standards.”

“But it’ll also be the richest country in Europe for the 1%,” Hudson concluded. 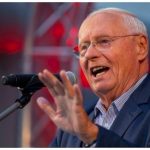 Oskar LaFontaine: “Germany is Acting as an American vassal in the Ukraine War”Germany, Russia, Ukraine, USA 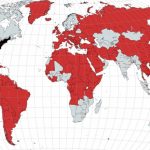