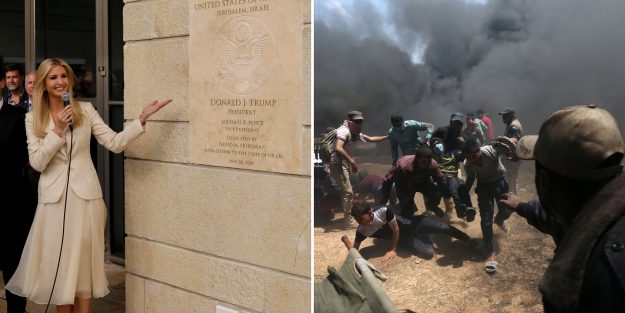 Senior White House Adviser Ivanka Trump (L) stands next to the dedication plaque at the US embassy in Jerusalem, and (R) a wounded Palestinian demonstrator is evacuated as others take cover from Israeli fire and tear gas during a protest at the Israel-Gaza border in the southern Gaza Strip, May 14, 2018. REUTERS/Ronen Zvulun/Ibraheem Abu Mustafa

After protests, YouTube reinstated a video exposing brutality towards Palestinians which it previously deleted. However, it classified the video as ‘pornography’ and restricted access to signed-in users who confirm their age.

YouTube on Wednesday decided to reinstate a video exposing Israel’s brutality towards Palestinians after receiving backlash on social media. Claiming the content violated its terms of service, the video-sharing platform on Sunday deleted the video, which was posted by Palestinian academic and activist Sana Kassem to pay tribute to Palestinians killed by Israeli forces during recent demonstrations in Gaza.

Renowned American professor and activist Norman Finkelstein reposted the video, which was again removed by YouTube. Finkelstein appealed to YouTube in an email, asking for the reason for its decision. “They will patiently wait until all the children in Gaza are murdered by Israel. Then they will repost the video,” Finkelstein told Anadolu Agency.

Shortly after his statement to Anadolu Agency, YouTube responded to Finkelstein, telling him they will be reinstating the video but placing it behind an age restriction. “YouTube reposts the Gaza video but classifies it as pornography,” Finkelstein said on his Twitter account, where he also shared the video.

But according to many YouTube users who often post videos criticizing Israel for its brutality against Palestinians, this is not the first time that YouTube has done this. “All my YouTube videos have been deleted by YouTube as I’ve been criticizing Israel and its blatant disregard for Palestinian life,” Robert Martin, an Australian activist who lives in Palestine, said on Twitter.

At least 21 Palestinians were martyred and at least 1,500 others wounded in demonstrations on March 30 marking Land Day, when tens of thousands of Gazans converged on the Gaza Strip’s roughly 45-kilometer eastern border with Israel to reaffirm their right to return to their ancestral homes in historical Palestine. Dubbed the “Great March of Return,” the protests were also aimed at pressuring Israel to lift its more than decade-long blockade of Gaza.

Israel has deployed thousands of troops along the fraught border, vowing to use deadly force against anyone who threatens the “Israeli security infrastructure”.

Middle East Monitor, Every Palestinian is subject to arrest