If Russia is the “aggressor state” in East Ukraine, why are more and more young Ukrainians (who are no longer allowed to travel without special permits from the military) seeking refuge there?

The recent decision by Ukrainian authorities to propose to women of 20-50 years of age to join the fighting army in the south-east raised many eyebrows not only in the east of Ukraine, but even in its nationalist Western part. Even there, the enthusiasm for war is waning—as migration statistics reveal.

If Russia is indeed fighting the war in neighboring Ukraine (as the mainstream media in the West keep claiming), then Russia invented the most humane method of warfare: inviting the enemy’s male population of the draft age to “wait out” mobilization on the territory of the ‘hated aggressor’ (“hated aggressor” being the name given to Russia by Arseniy Yatsenyuk, the prime minister of Ukraine).

“I know that many Ukrainians avoid being drafted into the army, they try to move to us [in Russia], at least for the time being. And they are doing the right thing, since their government is exposing them to bullets, treating them as cannon fodder,” Russian president Vladimir Putin said addressing students in Moscow last week. “We should change our legislation allowing Ukrainians, especially the people of the draft age, to visit Russia without any paperwork for extended periods of time, not just 30 days as now.”

This Russian strategy of “invitation to survival” may be life-saving for Ukrainian draftees. In December 2014, the Ukrainian president Petro Poroshenko acknowledged the death toll among Ukraine’s military to be 1,252 killed servicemen, not counting the maimed ones and the more recent casualties. [Germany’s intellignece service says the real figure is in the tens of thousands.] But this strategy is deadly for Mr. Poroshenko’s ‘general mobilization’ plans. Since the current “wave” of mobilization started on January 20, 2015, out of 78,000 Ukrainian men who received orders to report to the army’s commissariats, only 45,000 did so. Where did the rest go?

Statistics provided by Russia’s Federal Migration Service (FMS) give an answer to this question. “About 2.5 million Ukrainians, including 1.193 million of conscription age, are currently staying on the Russian territory,” the press service of FMS said in a statement. “Out of this number, more than 850,000 people arrived from Ukraine’s south-eastern regions, 440.000 of them applied for a refugee status.” Let our readers be reminded that the U.S. and the EU consider the south-east of Ukraine to be the “victim” of “Russian aggression”.

Some moves by the Ukrainian authorities indicate that the most popular destination of the draftees’ migration is Russia, where it is possible to stay out of trouble (and out of the draft) at no high cost. Less popular destinations include other regions of Ukraine and the EU member states. The Ukrainian General Staff, suffering from these non-combat losses, even issued a special regulation ordering the potential warriors of the draft age not to leave their homes without permits for travel from their local army commissariats. Without such a permit, the men of draft age won’t be able to travel legally—not only to foreign lands, but even inside Ukraine.

“Now that mobilization is on, people who may be asked to report to the army—these people have no right to travel freely not only abroad, but even outside the areas administered by their army commissariats,” Ukrinform news agency quotes General Staff’s mobilization chief Vladimir Talalay as saying.

So much for Ukraine’s much-touted ‘European freedoms’, including the no less touted ‘right to visa-free travel’ to the Schengen Zone and other Western lands, promised to Maidan’s supporters by the European Commission under Jose Manuel Barroso and by the U.S. state department’s Victoria Nuland.

The problem is that the increase in the amount of Ukraine’s ‘cannon fodder’ can actually backfire, punishing the new Ukrainian regime for its own belligerent rhetoric. If there was some step that could politically destroy the Ukrainian president, Petro Poroshenko, that was his decision to conduct several ‘waves’ of mobilizations in the year 2015 alone, drafting into the fighting army 50,000 men of up to 60 years of age before the end of April and 200,000 before the end of the year. Even those Ukrainians which support Poroshenko’s efforts to win the civil war in the rebellious Donbass region, even these people do not necessarily want to go to war or to send their children to there. Poroshenko admitted that out of the currently needed 50,000 men, only 25,000 went as volunteers.

Reports about the low competence of the Ukrainian commanding officers, which last year led to lots of disasters, including the destruction of several hundred Ukrainian servicemen near the border town of Ilovaisk (on the Russian-Ukrainian border), do not add to the draftees’ enthusiasm. The recent protest action in Kiev by the servicemen from the Aidar battalion revealed cracks in the pro-war coalition in Kiev. (The veterans of fighting in Donbas tried to take by storm the defense ministry and reportedly blocked for some time the building of the presidential administration.) The protesters from Aidar, seen as the most elite force among several ‘volunteer battalions’ fighting in Donbass since the summer of 2014, were demanding the resignation of President Poroshenko, Prime Minister Yatsenyuk and Defense Minister Arsen Avakov.

Immediately after the soldiers’ protests, the new regime’s powerful security service tried to present it as “Russia’s work”. The head of the Security Service of Ukraine (SBU), Valentin Nalivaichenko, announced that the protests were the work of a “Russian agent”, one “lieutenant-colonel of the General Staff named Chornobay”. The lieutenant-colonel is reported to be under arrest for “providing soldiers and deserters from the Aidar battalion with heightened figures of the battalion’s  losses”.

So much for “fighting heroes of Ukraine” who become “deserters” and “enemy’s agents” hours after demanding that their leaders resign. “One of the effects of Maidan was that it destroyed ANY opposition that had existed in Ukraine,” writes a Ukrainian political analyst Kost Bondarenko. Yes, now one can only agree with the authorities—or be labeled a traitor, a deserter and (most likely) a draft dodger. 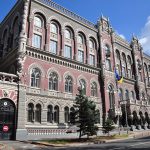 Ukraine’s economy is collapsing and the West doesn’t careBackground, Ukraine 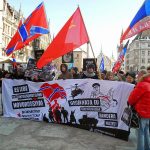