A third language, Surzhyk creole, which is a mix of Ukrainian and Russian, is more widespread than Ukrainian

Anybody who has been following the Ukrainian situation over the last few months knows that there is a great divide between the Russian speakers, mostly concentrated in the east and south of Ukraine, and the Ukrainian speakers, which dominate the rest of the country. Journalists, pundits, and other professionals have brought out the maps and charts numerous times, so if there’s one thing that’s true, it must be this. Everybody agrees on this, correct?

Let’s look at some of the maps that are representative of numerous maps found online these days. Though not all agreed on where the exact boundaries are located, many look similar to this map: 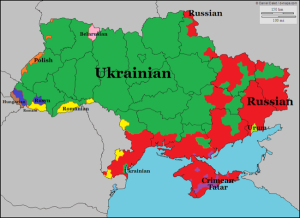 So, overall, the country in general is one big happy Ukrainian family, with a small minority of malcontents concentrated in the east and the south. The areas on the map that these malcontents occupy is quite small; but since they occupy some of the most productive land in the country, they’ve just got to man up, swallow their pride, and get along with everybody else. That’s not asking much, is it?

With a bit little more searching, I came across this map: 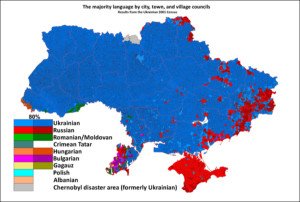 Same country, but the area dominated by Russian speakers has shrunk more than 50%. In fact, it may have shrunk by 75%.

I would be tempted to say that this map is a fluke, but look at what it says at the top. “Results from the Ukrainian 2001 census”. Well damn, this simply has to be a more accurate map than the first one. Hey, it’s based on the census!

And once you take Crimea out of the picture, which Russia has conveniently done, the Russian speaking areas are so minute that he really shouldn’t hurt Ukraine at all to let them go their own way. But hey, they are our malcontents. Once again, suck it up and get along. Is that so much to ask that you stick with the 99% of the country that speaks Ukrainian?

Note also that it states “The majority language by city, town, and village councils”. If there’s a requirement that council business be done in Ukrainian, it would make sense that these councils would be dominated by Ukrainian speakers. It’s also a sign that even back in 2001, Russian speakers in Ukraine weren’t particularly welcome in their own country!

Now let me say at this point that I believe that the first map is more accurate than the second map. This has nothing to do with any type of in-depth study of the issue; it’s just that neither of those maps seem to accurately reflect what I have learned about this country over the last eight years.

So, am I out of touch with reality, or is their something else going on here?

Now, let’s look at a third map I found. Gee, this seems pretty official too. It’s from the Kiev National Linguistic University. Seems they would know something about languages: 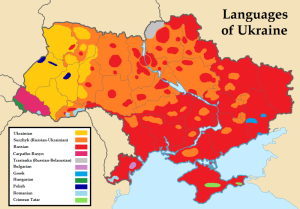 What just happenend here? Now, although there are ten or so colors on this map, this map concentrates on the three major colors. Yellow in the west. Red in the East. And Orange in the middle. The red is Russian, the yellow is Ukrainian, and the orange is Surzhyk.

Huh? Surzhyk? What the hell is that? Well, this Surzhyk is a mix of Russian and Ukrainian.

It’s a hybrid language. In the big scheme of things, this makes sense, doesn’t it? It’s a language that developed over centuries in areas between where Russian and Ukrainian dominates and is a mix of both.

Now let me say at this point that I believe this third map is more accurate than the other two. Again, this has nothing to do with any type of in-depth study of the issue; it’s just that neither of those maps seem to accurately reflect what I have learned about this country over the last eight years.

Look at the third map. Ukrainian plus Surzhyk dominate about 60% of the map, while Russian plus Surzhyk dominates about 70%. This cannot be allowed to stand in a country that is hoping to develop its own unique identity, an Ukrainian identity. The map must be skewed to minimize the influence of their neighbor to the east, and skewed to maximize those influences that you want to promote.

It seems then that this concept of a united Ukraine has even less basis in reality then one would think. 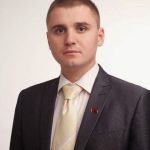