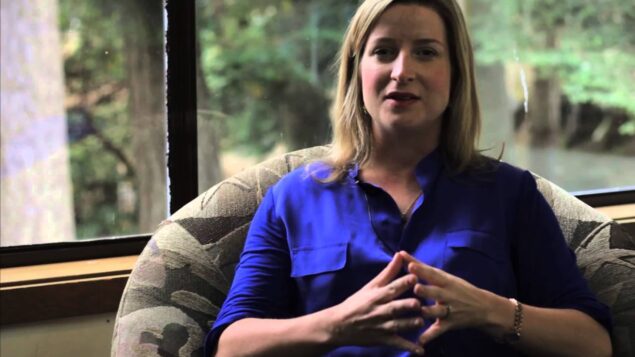 Did Canada’s representative to the Palestinian Authority lie or was she simply ignorant of important facts?

Did Canada’s representative to the Palestinian Authority lie or was she simply ignorant of important facts?

Yesterday Robin Wettlaufer criticized Electronic Intifada editor Ali Abunimah for tweeting that Canada “arms and funds the apartheid state to murder Palestinians and steal their land.” She responded by writing “we neither arm nor fund Israel.”

After Abunimah and others provided evidence of Canada “arming and funding Israel” the Canadian diplomat blocked Abunimah on Twitter. 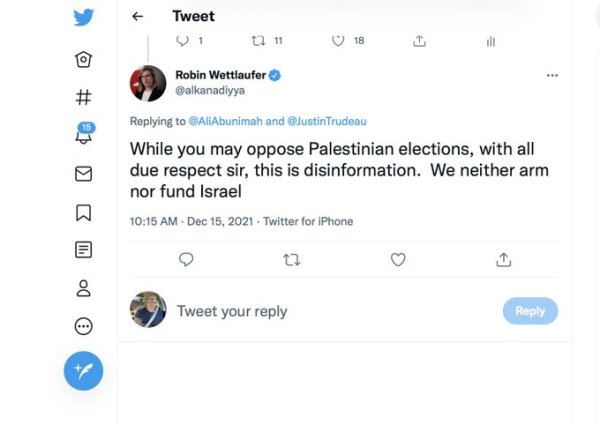 It’s odd Wettlaufer would object to saying Canada arms Israel since Canadian weapons sales to Israel have received a decent amount of attention in recent months. At their convention in April the NDP passed a resolution calling for Canada to (among other things) end arms sales to Israel, which party leader Jagmeet Singh raised on multiple occasions during the rise of Israeli violence in May. The party included this plank in their recent election platform. Between 2015 and 2020 Canada exported about $15 million a year in weapons directly to Israel.

An equal or greater number of Canadian weapons sales are delivered to Israel through US exports. Under the Canada-US Defence Production Sharing Agreement the two countries’ arms industries are highly integrated so there is little data about weapons exports to the US, some of which would be exported to Israel. A 2009 Coalition to Oppose the Arms Trade (COAT) report concluded that over 100 Canadian weapons makers exported products to Israel.

Canada has been sending and selling weapons to Israel for a long time. During the 1947-8 Palestinian Nakba (catastrophe) Canadian Zionists bought weapons for the war/ethnic cleansing effort. Between 1950 and 1956 Canadian companies sold Israel significant amounts of weapons. “By the summer of 1950,” notes In the Strategic Interests of Canada: Canadian Arms Sales to Israel and Other Middle East States, 1949-1956, “Israeli arms requests were being placed in Canada with an almost regular frequency, and from this point until the 1956 Suez war, there was never a time when a substantial Israeli arms request was not under consideration by the Canadian government.” At the time Egyptian President Abdul Nasser criticized Canada’s arms sales to Israel.

A more significant Canadian financial contribution is the quarter billion dollars a year raised by registered “charities” for Israel-focused projects. Canadian taxpayers effectively cover about $100 million of this sum even though Israel’s GDP per capita is equal to Canada’s. Among many various projects, Canadian charities support the Israeli military, racist organizations and West Bank settlements, which should all contravene Canada Revenue Agency regulations.

There’s another major Canadian financial contribution to Israel that Wettlaufer ought to be familiar with as representative to the PA. Over the past decade at least a hundredmillion dollars in Canadian “aid” has been spent training and supporting a Palestinian security force to serve as an arm of Israel’s occupation.

Part of the US Security Coordinator office in Jerusalem, two dozen Canadian troops, police and border security are based in the West Bank as part of Operation Proteus. In Security Aid: Canada and the Development Regime of SecurityJeffrey Monaghan details Canada’s role in turning Palestinian security forces in the West Bank into an effective arm of Israel’s occupation. Monaghan describes a $1.5 million Canadian contribution to Joint Operating Centers whose “main focus … is to integrate elements of the Palestinian Authority Security Forces into Israeli command.” Israel’s internal intelligence agency, the Shin Bet, vets all of the Palestinian security recruits trained by the US, Canada and UK.

In 2012 the president of the Canadian International Development Agency, Margaret Biggs, made it clear that Israel pushed Canada to finance the PA. An internal notereleased through an access to information request noted, “there have been increasing references in the past months during high-level bilateral meetings with the Israelis about the importance and value they place on Canada’s assistance to the Palestinian Authority, most notably in security/justice reform.” The heavily censored note suggests the goal of Canadian “aid” is to protect a corrupt, unelected PA from popular backlash. Biggs explained that “the emergence of popular protests on the Palestinian street against the Palestinian Authority is worrying and the Israelis have been imploring the international donor community to continue to support the Palestinian Authority.”

Whether Wettlaufer lied or was simply ignorant, the claim that “we neither arm nor fund Israel” reflects poorly on Canada’s representative to the PA. 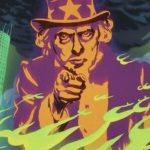 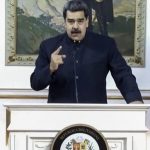