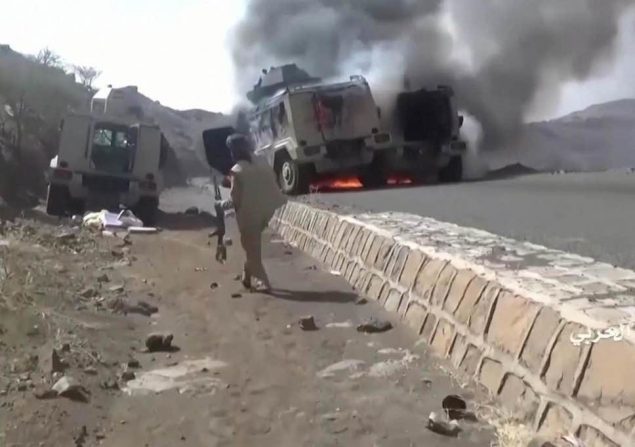 The Houthi advance on the Yemeni-Saudi border became a second major blow to Saudi Arabia in September. After almost 5 years of the Saudi invasion of Yemen, the Kingdom found itself in a no win situation.

In late September, Yemen’s Houthis carried out a large-scale operation against Saudi-led forces on the border with the southern Saudi province of Narjan. According to a spokesperson for the Armed Forces of the Houthi Government, the Houthis fully defeated at least 3 brigades of Saudi-backed forces. The Yemeni force killed 500 personnel, injured 2,000 others, destroyed 15 vehicles and seized a large number of weapons and military equipment.

Brig. Gen. Sari said that aircraft of the Saudi-led coalition conducted at least 300 indiscriminate airstrikes in a desperate attempt to stop the Houthis’ advance. These strikes killed at least 200 coalition-backed personnel, according to the Houthis.

The Saudi-led coalition and mainstream media are now attempting to downplay recent military developments. However, videos and photos from the ground demonstrate that Saudi-led forces in fact suffered a devastating defeat in the area.

The Houthi advance on the Yemeni-Saudi border became a second major blow to Saudi Arabia in September. After almost 5 years of the Saudi invasion of Yemen, the Kingdom found itself in a no win situation.

At the same time, the Saudi-led coalition itself is steadily crumbling because of internal contradictions. The port city of Aden remains in the center of tensions between Saudi-backed and UAE-backed forces. Local sources say that the withdrawal of the best detachments of UAE-backed forces from frontlines in central and northern Yemen may be one of the reasons behind the success of the Houthi operation in the border area.