A year after $18 billion debt deal, Ukraine is hardly better off

A year after Ukraine averted default by reaching an agreement with creditors to restructure $18 billion of debt, the country’s bond market is again beginning to veer off course. 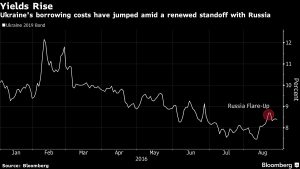 One of the charts contained in Bloomberg News report

After outperforming all of emerging Europe in the first seven months of the year, some of those gains unwound as a flare-up in tension with Russia over Crimea heightened security concerns. The selloff demonstrates the fragility of investor confidence as the country struggles to rebuild reserves amid a freeze in aid from the International Monetary Fund.

“The rally in Ukrainian bonds has been driven by short-term money, which has the potential to leave the market very quickly,” said Vladimir Miklashevsky, a senior strategist at Danske Bank A/S in Helsinki, who recommends selling all but Ukraine’s shortest-maturity debt. “There’s still too much uncertainty about the IMF program and political risk to talk about Ukraine issuing new debt” as the aid program envisioned, he said.

The following charts show some of the key fundamental risks looming over Ukraine’s bond market [go to original weblink above to view charts]: