The economic crisis in Ukraine is increasingly exposing the twisted priorities of its government. 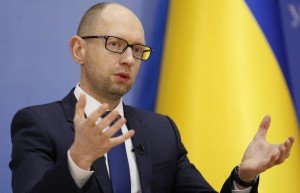 It should be said clearly that the existential crisis the Ukrainian economy now faces is a direct consequence of the country’s political crisis. Ukraine’s economy was in poor shape in 2013. Decades of corruption and mismanagement had whittled away the economy’s potentially large resources, while Yanukovych’s policy of maintaining the value of the hryvnia had damaged the economy’s competitiveness and denuded its foreign currency reserves. The situation was made worse by constant crippling trade disputes with Russia, Ukraine’s biggest trade partner, which was aggravated in 2013 by Yanukovych’s decision to seek an Association Agreement with the EU. 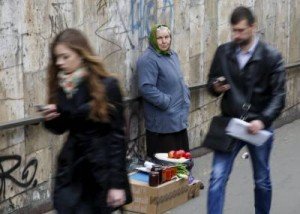 However, it would have been wrong to speak of an economy in terminal crisis. In December 2013, the short-term funding problems the economy was facing appeared to have been solved, at least temporarily, by Yanukovych’s success in negotiating a generous financial package from Russia. This included a $13 billion loan and a large discount on the price of the gas Ukraine was importing from Russia.

What has transformed a bad situation into a catastrophic one is the effect of the Maidan coup and the ideologically driven policies pursued since the coup by the new government. Not only has the new government quarrelled even further with Russia, forfeiting all the advantages offered by the aid package Yanukovych negotiated with Russia, but its severing of trade links with Russia in favour of far more problematic links with the EU has dealt a body blow to Ukrainian industry.

Beyond these decisions was the catastrophic decision, made in June 2014, to try to solve the challenge the new government faced in Ukraine’s eastern regions (triggered by protests at the violent and unconstitutional means it used to come to power) not through dialogue but through war. Given the cost of the war and the vital importance of these regions to the Ukrainian economy, it was inevitable that the result of this decision for the economy would be disastrous, and so it has proved.

Ukraine’s economic results for the first quarter have exceeded even the most pessimistic predictions. GDP contracted by an extraordinary 17.6% over the already depressed levels of the first quarter of 2014. Inflation is supposedly running at an annual rate of 35%. Many analysts question this, with some saying the true inflation rate is closer to 240%.

Trade with both Russia and the EU has collapsed, in the case of the EU by around 40%. Though the hryvnia’s value has more than halved, the implosion of Ukraine’s industry and the loss of key export industries in the eastern regions means that the country continues to run a trade deficit.

Meanwhile the country’s already limited foreign reserves have dwindled further, despite help from the West and the IMF. From around $20 billion on 1st January 2014, they have now fallen to $9.6 billion, a small improvement from the critically low level of $5.7 billion to which they fell during the winter. That improvement was apparently caused by emergency help from the IMF, which however is only likely to provide temporary relief.

Not surprisingly therefore, in light of these catastrophic figures, the Ukrainian government is now moving towards default.

Any objective observer viewing this catastrophic situation would be urging the Ukrainian government to do the obvious step to turn this situation around. This is to make peace with the eastern regions by fully implementing the February Minsk peace plan, and to seek an urgent rapprochement with Russia.

This of course is precisely what the Ukrainian government refuses to do. Instead, as the article attached below from Forbes shows, it continues to chase the phantom of economic rescue by the West — in this case from the US — even though more than a year from the Maidan coup it should be obvious it won’t happen.

What Forbes says is now being proposed is an across-the-board fire sale at knock-down prices of the Ukrainian economy’s prize assets to US and Western investors. Some of these are likely to be the same assets for which Ukraine has consistently in the past (including under Yanukovych) refused much better Russian offers. Needless to say, Russian offers on this occasion will not be welcome.

The potential for corrupt enrichment on the part of those nominally organising this fire-sale is enormous. It is anyway a strange step coming from people who claim to be Ukrainian patriots – to sell off their country’s prized assets at bargain basement prices.

The idea is anyway misconceived. As Forbes correctly points out, no sane US investor is going to sink money into Ukraine in a situation of war, pending default and economic collapse unless, like George Soros, he has an overriding political motive for doing so. Given that few among the hardheaded US investment community do, the prospects of this fire-sale raising much money are slim.

These illusory and desperate plans are no substitute for the hard choices Ukraine’s government needs to make. The fact that it is incapable of making them goes far to explain another point made in the article – the plunging support according to opinion polls of its leaders, Poroshenko and Yatsenyuk.

The following article appeared in Forbes:

“The Prime Minister of Ukraine has urged U.S. partners to actively use the investment opportunities offered by the privatization campaign in Ukraine, particularly in the energy sector,” a statement posted on Ukraine’s governmental website said on Monday.

Ukraine seems to be constantly embattled. The recent Euromaiden revolution took the country out of Russia’s sphere of influence and into Europe and the U.S. “loving arms.” However, the nation is not united on Kyiv’s newfound love for the west. And despite calls for Ukraine to be more pro-actively engaged with a capitalist Europe than with a mostly state controlled Russian economy, it is unclear just how attractive the country looks to Americans right now. The hub of Ukraine’s industrial east is largely controlled by separatist groups backed, in part, by the Russian military. Although Russia denies official support (they say its volunteer support), the AP has reported extensively on how local pro-Russia separatist groups receive off-the-reservation military aid from “Uncle Putin”.

Yats, meanwhile, is teaming with president Petro Poroshenko in leading a nation of disbelievers. Their poll numbers are in the gutter. And so if Yats thinks that selling a state asset for a dime to foreigners is going to go off without protest, then it is clear that Ukraine is not disinterested in being controlled by foreign entities after all, so long as those foreign entities do not speak Russian.

In March, the Ukrainian government approved a list of companies subject to privatization, putting up for sale predominantly energy-related firms. Natural gas giant Naftogaz was not one of them. Earlier this year, the Cabinet of Ministers approved the sale of 164 businesses slated for the auction block this year. The fund estimates the face value of these shares at 3 billion hyrvnia ($150 million) for companies that have an existing market value of 15 billion hyrvnia. Yats said that the 164 number given to him by his cabinet was too low. He wanted to increase the number to 1,200. In other words, it’s a fire sale.

Besides the $2 billion from the U.S., Ukraine is getting most of its money from the European Union and International Monetary Fund. Around $40 billion is heading their way over a four year period some in the press have likened to the Marshall Plan, which helped rebuild Europe after World War II. 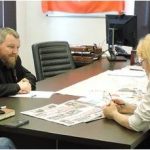 Interview with Andrey Purgin, Chairman of the National Council of the Donetsk People’s RepublicDigest, Ukraine