A story last week in the National Post [see weblink below] revealed the disturbing fact that there are actually monuments in Canada that glorify Second World War Nazis. There is no denying the truth of these allegations, as they were accompanied by photographs of two offending statues.

One is in Oakville, Ont. and it is dedicated to all those who served with the 14th Waffen SS Galizien Division. The second, located in Edmonton, Alberta, honours Roman Shukhevych, the wartime leader of the Ukrainian Insurgent Army.

The original source of these revelations was a series of tweets from the Russian Embassy in Ottawa. This led to an immediate response from the Canadian Ukrainian community denouncing the Russians for attempting to incite divisiveness in Canada with “fake news.”

We saw a similar response back in March when it was first reported that Foreign Affairs Minister Chrystia Freeland’s maternal grandfather, Michael Chomiak, was a Nazi collaborator during the Second World War. Instead of admitting that this was true, Freeland attempted to portray herself as a victim of Russian disinformation.

The problem with the simplistic “blame Russia” excuse is that it does not change history.

Freeland’s grandfather was indeed a Nazi collaborator who, as the editor of a Ukrainian-language newspaper, published anti-Semitic rants and encouraged volunteers to join the 14th Waffen SS Galizien Division. This is the same unit that is immortalized and honoured by the statue in Oakville.

Despite the chorus of Ukrainian apologists who claim otherwise, members of the 14th Waffen SS Galizien Division were no Boy Scouts. Notorious SS General Jurgen Stroop was one of the division’s early instructors. Stroop is perhaps best known for his annihilation of the Jewish ghetto in Warsaw.

Following Stroop’s example, the Galizien Division was involved in the punitive destruction of the Polish village of Huta Pieniacka in 1944. Men, women and children were executed in cold blood. One surviving witness described how children were killed by having their heads smashed against trees. The crime committed by the residents of Huta Pieniacka was that they had been harbouring Jews.

Then there is the controversy about the true nature of Roman Shukhevych, the Ukrainian wartime leader who is presently immortalized with a statue in Edmonton. To many Ukrainians, Shukhevych is a hero who only fought alongside the Germans initially as a matter of practicality while in pursuit of an independent Ukraine. When the Nazi fortunes were reversed and the Soviets were again advancing into Ukrainian territory, Shukhevych did indeed turn the guns of the Ukrainian Insurgent Army on his erstwhile German allies.

However, there remains the sticky issue of Shukhevych’s role in the 1941 massacre of Ukrainian Jews in Lviv. At this juncture, Shukhevych was commanding a militia unit that he called the Nachtigall Battalion. Shukhevych’s band of eager volunteers, working alongside German military troops, was responsible for the murder of between 4,000 and 6,000 Jews.

Even if Shukhevych and his men later fought against the Germans, this cannot possibly exonerate him from his role in the Holocaust.

While the Canadian government may wish to show absolute solidarity with Ukraine during this current crisis with Russia, we cannot do so by rewriting history.

Freeland’s grandfather was a Nazi.

Shukhevych is a mass-murderer and perpetrator of the Holocaust even if he later presented himself as a simple patriot.

The 14th Waffen SS Galizien Division was not a “national liberation army” as Ukrainian apologists for the unit would have us believe. According to author Hale, “Both the formation and the conduct of the ‘Galizien’ reflect its origins in the German plan for mass murder.”

Selectively denying any aspect of the Holocaust is still denial.

It is not fake news if it is true, and the Russians couldn’t use the existence of Nazi monuments to embarrass Canada if such tributes did not actually exist. And they do.

Some experts accuse the Russian embassy of intentionally sowing discord and divisiveness, part of a broader strategy to disrupt the political process in Western democracies

… Soldiers battling the Soviet Union for Ukrainian independence took up arms alongside Germans, who were at war against the Soviets from 1941. Despite [sic] Ukrainian fighters’ entanglements and co-operation with Nazi Germany’s war efforts, a Canadian government commission in 1986 found members of the Galicia Division who had immigrated to Canada — some of whom are honoured at the Oakville cemetery — were screened for security purposes, had never had charges against them substantiated and “should not be indicted as a group.” 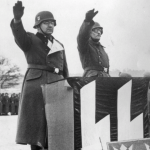 Why deny the Ukrainian Nazi connection?Ukraine 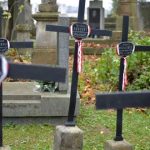