There are growing protests by the working class in Ukraine against the economic calamity gripping the country. 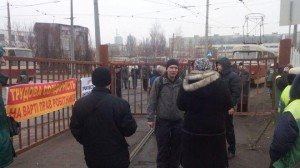 Transit workers in Kyiv began strike action on Dec. 18, demanding payment of their wages. They have not been paid for several months. Union leader Vitaly Mahinko told Ukrainian media on Dec. 18 that the strike will expand in the coming days. (Russian-language news report here.)

The Federation of Trade Unions of Ukraine is demanding an urgent meeting between Prime Minister Yatsenyuk and representatives of national trade unions. The FTUU is the largest union federation in Ukraine. Its president, Grigory Osovoy, says the unions in Ukraine are angry with government policy that “makes people poor and turns them into applicants for state welfare benefits”. The Federation says will hold a general strike on December 23 if its concerns are not met.

Osovy explained, “Given the situation, the Federation of Trade Unions of Ukraine has initiated a request for an emergency meeting between Prime Minister of Ukraine and representatives of national trade unions to discuss problematic issues in the Programme of the Cabinet of Ministers of Ukraine, the restoration of social dialogue and socially acceptable solutions to prevent social conflict”. (Russian-language news report here.)

As reported earlier in Capital news service, members of the FTUU staged a large protest on Oct. 15 in front of the building where the Cabinet of Ministers was meeting. They demanded an end to policies causing layoffs of workers. They also demanded wage compensation for the soaring cost of living and a voice in government decisions.

In Odessa, southern Ukraine, workers at a large chemical factory in the area of the port of Odessa (Odessa Portside Plant) are protesting loss of jobs and a threatened privatization of their factory which employs 600 people. The ‘Privat’ group of companies owned by oligarch Igor Kolomoysky is looking to get its hands on the state-owned factory for a song. It is one of the more profitable enterprises in Ukraine, producing fertilizers and other derivatives of ammonia. It was the largest factory of its kind in the Soviet Union.

The workers are also demanding an end to the economic blockade of the Donbas region because their industry has close economic ties to there and it has lost a lot of work due to the civil war. At a large rally on Dec. 14, workers shouted, ‘No to a blockade! Let’s work with Donbass! Let our plant work! Save our jobs! Kolomoysky, hands off the plant!” (News report in Russian here. Report here in English. Watch a report of the workers’ Dec. 14 protest action by clicking on the screen below.)

Despite conditions of repression in Odessa, important protests against deteriorating social conditions are taking place there. The group ‘Voice of Odessa’ will hold its next mass rally on Dec. 19, demanding an end to electricity outages and increased tariffs. (Report here.)

Voice of Odessa’s main slogan is, ‘We want to live, not just exist’.

In the Luhansk Peoples Republic (in southeast Ukraine) workers are also on the move. Workers at the state-owned mining equipment manufacturing plant Luganskugleremont have taken over production and booted out the factory administration. The plant had been run into the ground and workers were not being paid. One hundred workers have started up production and are determined to expand. The plant employed 2,500 workers before Kyiv launched its civil war in eastern Ukraine in April of this year.

As reported earlier this month on New Cold War.org, steelworkers in Kremenchug, south central Ukraine are mobilizing and demanding that the Kyiv government take necessary measures to keep their enterprise in business. It manufactures steel and iron components for the transportation industry but has lost markets in Russia following the government’s sharp turn to association with austerity Europe.

The Ukrainian government has presented a budget proposal to the Rada (parliament) that would drastically cut the social wage, including raising the pension age from 57 to 65 for women and 62 to 65 for men. It would also reduce the maximum age for obligatory education of children from 11 to nine and remove the constitutional guarantee of free education and health care. 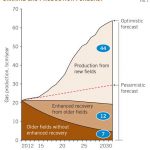 Chevron pulls out of shale gas project in UkraineDigest, Ukraine 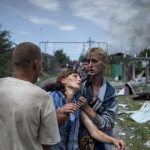