With help from US media, Nicaragua’s coup-mongers aiming for western hearts and minds 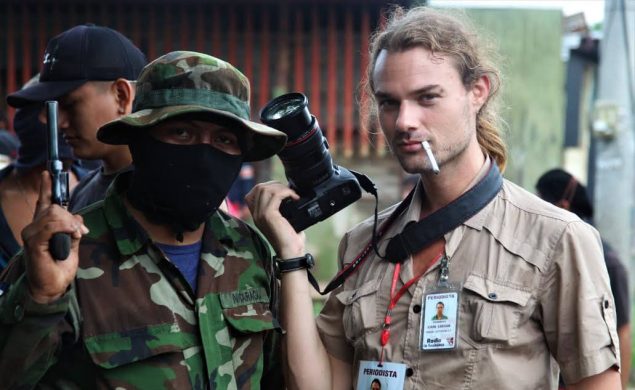 Carl David Goette-Luciak poses with an opposition gunman in the city of Masaya, Nicaragua. Photo | Edge of Adventure

With its support tanking at home, Nicaragua’s opposition is seeking to win over public opinion in the West. A factually-challenged, distortion laden article in Vox by a familiar anti-Sandinista activist exhibited the campaign’s strategy.

By Nan McCurdy and Nora Mitchell

With Its Support Tanking At Home, Nicaragua’s Opposition Is Seeking To Win Over Public Opinion In The West. A Factually-Challenged, Distortion Laden Article In Vox By A Familiar Anti-Sandinista Activist Exhibited The Campaign’s Strategy.

Having failed to depose Nicaragua’s President Daniel Ortega in their coup attempt in 2018, and having lost most of the support they briefly enjoyed within Nicaragua itself, opponents of the Sandinista government have changed their tactics. They’ve embarked on a long campaign aimed at governments and public opinion in the United States and in Europe to portray Ortega as a dictator who is curbing press freedoms and free speech, assaulting human rights and murdering opponents.

The most recent example of the campaign was an article by Carl David Goette Luciak and Caroline Houck, Inside the slow culling of Nicaragua’s free press. Houck is or was a writer for Defense One, a news source for the arms industry. Goette Luciak is a long-time anti-Ortega activist and friend of US-backed Nicaraguan opposition leaders. He was escorted out of Nicaragua by police and border officials after claiming to be a journalist and having written freelance for the Washington Post and the Guardian while never having the press visa required in Nicaragua (and most other countries, including of course the US).

Despite recently posing as a journalist, Goette Luciak initially came to Nicaragua to support anti-canal activists and later formed a close working relationship with the leaders of the violent opposition that drove the attempted coup. He can be seen in multiple photos with them and with their armed lackeys; one of the photos was used for the cover of the book we contributed to, Nicaragua 2018: Uprising or Coup? The novice reporter, who never had a byline before the coup began, listed himself as “director of investigations” for an obscure outlet run by Azucena “Chena” Castillo, an outspoken member of the Sandinista Renovation Movement (MRS) party who was directly involved in the regime change attempt.

Goette-Luciak is also captured on video taking photos of an old man being tortured by the opposition in the documentary March of the Flowers. In this short video from the June 30th, 2018 march, the reporter appears beginning at 13 seconds.

We began to write about Goette-Luciak because he did nothing after witnessing the torture of the man by violent coup-mongers – his footage of the shocking incident never appeared anywhere.

When he began his journalism career, writing for the Washington Post and the Guardian in 2018, Goette-Luciak never once mentioned the opposition violence he witnessed, the opposition-armed-and-paid thugs he posed for photos with or the torture he witnessed at the Flowers March. The least he could have done in the course of his pro-coup coverage was report the opposition’s brutality that unfolded before his eyes.

Goette-Luciak and Houck opened their most recent article by hinting at government limits on the internet, curiously overlook the healthy commercial internet enterprises that populate Nicaragua as well as the audacious government programs providing free internet in parks throughout the country for the population, even in the most isolated parts of the nation.

In the second and twenty-second paragraphs, they claim that government supporters burned down radio stations, for which there is not a shred of evidence. In fact, opposition burned down the private pro-Sandinista Tu Nueva Radio Ya, located in front of the Central American University, one of the seats, then and now, of the opposition. They actually attempted to burn it down twice, succeeding the third time with twenty employees who barely made it out alive. They also burned down Radio Nicaragua and the National Autonomous University Student Center and Radio Station in Leon killing Sandinista student, Christian Cardenas.

The authors went on to claim that the government has restricted free press by blocking newsprint and ink to the newspaper, La Prensa. Few people read newspapers in Nicaragua and slowly print versions have gone by the wayside. La Prensa fired two hundred employees in mid-2018.

The Miami Herald is shutting down because it doesn’t sell enough papers but nobody blames the US government. It’s a tough market for print newspapers all over the world. 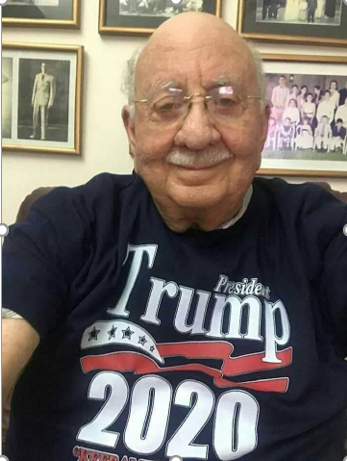 La Prensa is owned by the right-wing Chamorro family, which fiercely opposes Sandinista rule. Members of this oligarchic dynasty also own Confidencial and direct the nongovernmental organizations CINCO, Invermedia and La Fundacion Violeta Barrios, which serve as intermediaries to channel USAID and National Endowment for Democracy money to other organizations and media.

The Chamorro media empire generates a constant stream of pro-coup propaganda that helps drive the case for US sanctions and intervention. The Chamorro family is known historically for having a monopoly on the US-financed media.

La Prensa had long overdue debts with the customs office (Direcion General de Aduana, DGA). Rather than pay the debts, the newspaper has accused the government of blocking their paper and ink supply and requested help from the US press.

La Prensa also has a long record of abusing the custom’s tax exemptions for newspaper printing materials by using the supplies for other print businesses, and also importing luxury cars and even yachts. The exemption was only for a legitimate work vehicle.

But the onslaught of negative press from the international media prompted the government to release La Prensa’s materials, relieving the paper of its financial obligation to the customs office.

The international press has been relentless in printing and reprinting deceptive claims that echo the opposition narrative. The Nicaraguan population is overall savvy enough to see through the opposition’s propaganda campaign. Claims of repression against La Prensa have failed to sway the public in large part because it has seen the US use this paper for over fifty years as its main media vehicle against the population, most notably during the US-backed Contra war of the 1980s.

La Prensa has received funds from the US government since the 1980s, and most openly through the National Endowment for Democracy (NED). Confidencial is funded through the same source.

Of all the US-backed media personalities who participated directly in Nicaragua’s 2018 coup, inciting a campaign of nationwide violence that saw Sandinistas and unarmed police officers burned and tortured on camera, only Miguel Mora and Lucia Pineda of 100% Noticias faced prison time. 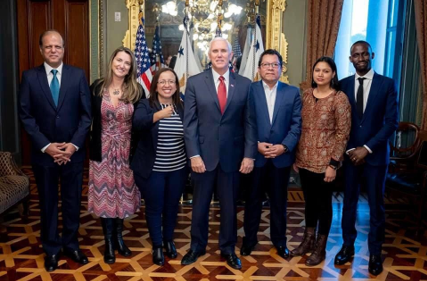 Lucia Pineda and Miguel Mora met with US Vice President Mike Pence where he assured them he “would not leave the Nicaraguan people alone.”

Miguel Mora was convicted of threatening a young policeman, Gabriel de Jesus Vado Ruiz, who was kidnapped, tortured, killed and burned at a roadblock soon after. Mora also threatened a municipal worker, Bismark Martinez, who was disappeared and found dead a year later after being tortured on camera.  Pineda, for her part, gleefully appeared on camera beside masked bandits who burned down government buildings in the city of Granada, while the fires raged behind them.

In search of peace and reconciliation, the Sandinista government gave amnesty to Mora and Pineda in June 2019.

Knowing what Goette-Luciak did in Nicaragua, for which he was deported on October 1, 2018, and with numerous articles and photos attesting to his behavior, it is more than a little surprising that a media outlet like VOX would publish him.

Main photo: Novice ‘reporter’, Carl David Goette-Luciak from the Grayzone “How an US anthropologist tied to US regime-change proxies became the mainstream media’s reporter on the ground in Nicaragua.”