Poland’s Defense Ministry says it plans to train about 60 Ukrainian army instructors this year, including NCOs of the OUN battalion (OUN-the Organization of Ukrainian Nationalists). The training sessions would take place in Poland in June, September and October. 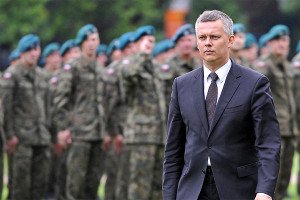 Several other NATO members are also joining the NATO program known as the Defense Education Enhancement Program – DEEP. Its aim is to bring Ukraine’s forces up to the standards of the Western alliance. Tomasz Siemoniak, Polish Minister of National Defence, has already discussed the issue with General Mieczysław Gocuł, Chief of the General Staff of the Polish Armed Forces. Ten Ukrainian servicemen are to come on June 29, with 20 more to follow in September and 30 in October.

Poles perceive the OUN as a terrorist organization involved in mass murder of civilians during WWII, acting hand in hand with Ukrainian policemen and German fascists. OUN militants perpetrated assassinations of Polish politicians in the period between the two wars. The organization took part in the Volyn massacre in 1945 and attacks against Polish servicemen in late 1940s – early 1950s. Tadeusz Isakowicz-Zaleski, a Polish Catholic priest, author and activist, is known for his uncompromised position on the policy of making advances to Ukrainian nationalists. According to him, the Polish Minister of Defense has desecrated the memory of those who lost lives in the fight against Ukrainian nationalists and terrorists. He called on the Minister to resign on moral grounds.

The plans to train Ukrainian nationalists have become public. The military rushed to refute the fact. They said the information about OUN fighters was false, as well as the news about training the fighters of Ukrainian battalions manned by nationalists, such as Aidar, Azov, Kharkiv, Prikarpatye and others. But the Polish Ministry of Defense confirmed the fact that the Ukrainian regular military are included into the training program.

The problem still exists. The OUN fighters became part of the 81th air-assault brigade formed on the basis of the 95th separate air mobile and 25th air borne brigades. The unit has ill fame. On March 16 of this year, a reportedly intoxicated Ukrainian soldier drove his military vehicle into a woman and her two children in the village of Konstantinovka in Donetsk region). Eight year old Polina died.

Polish media ask if there are any guarantees the 81th brigade with OUN soldiers in its ranks will not be included into the training program. Is there any way the Defense Minister could check that there were no OUN ideology followers among the Ukrainian military coming for training? There is nothing like a special statement on the part of the Ministry of Defense saying OUN fighters (the followers of Bandera and Shukhevych) are not eligible for the program.

It should be noted that Tomasz Siemoniak is Ukrainian by origin; his father was deported during the Vistula Operation in 1947. The Polish authorities of the day wanted to weaken the Banderite underground, so they relocated the local population from the border areas to the western parts of the country.

Janusz Adam Onyszkiewicz, former Minister of Defense, is a nephew of the militant known as Orest who was handed down a death sentence by a Polish court in 1950.

Warsaw is an awkward position. On the one hand, it says the memory of Poles who lost their lives as a result of atrocities committed by the OUN-UPA (the Organization of Ukrainian Nationalists – Ukrainian Insurgent Army) should be honored. On the other hand, driven by hostility towards Russia, the government fosters the re-emergence of Ukrainian political radicalism. Condemning the crimes committed by OUN-UPA, Polish politicians never mention the United States, Canada or Germany – the major NATO allies and the countries that contributed into the rebirth of Ukrainian nationalism.

The authorities of the country should realize that they are responsible before the world for allowing this ideology, which is hostile to humanity, to revive and spread around. Polish politicians strictly comply with the instructions of “senior partners” even to the detriment of their own people. 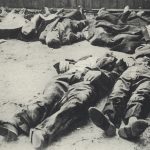 Wola Massacre of 1944 and Polish authorities: Another case of political amnesiaEurope - East 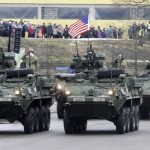