Will Congress face Down the Deep State? 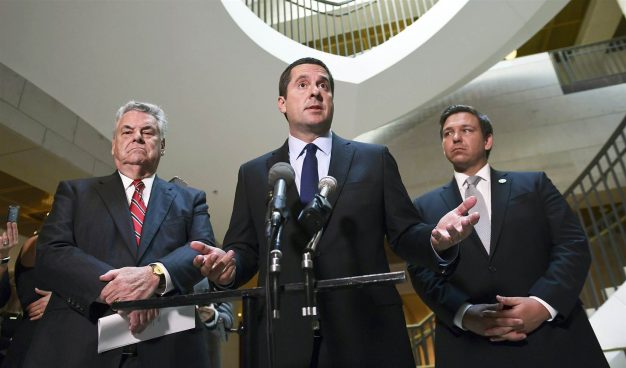 Will Congress face down the Deep State?

The House Intelligence Committee’s vote on Monday to release a memorandum describing alleged malfeasance at the DOJ and the FBI could test constitutional principles.

Originally published as Will Congress face down the Deep State?, Consortium News Jan 30 2018

With the House Intelligence Committee vote yesterday to release its four-page memorandum reportedly based on documentary evidence of possible crimes by top Justice Department and FBI leaders, the die is cast. Russia-gate and FBI-gate are now joined at the hip.

The coming weeks will show whether the U.S. intelligence establishment (the FBI/CIA/NSA, AKA the ‘Deep State’) will be able to prevent its leaders from being held to account. Past precedent suggests that the cabal that conjured up Russia-gate will not have to pick up a ‘go-to-jail’ card. This, despite the widespread guilt suggested by the abrupt way that several senior-echelon DOJ and FBI rats have already jumped ship. Not to mention the manner in which FBI Deputy Director Andrew McCabe, was unceremoniously pushed overboard yesterday, after Director Christopher Wray was given a look at the extra-legal capers described in the House Intelligence Committee memorandum.

Granted, at first glance Deep State’s efforts to undercut candidate Donald Trump at first seem so risky and audacious as to be unbelievable. By now, though, Americans should be able to wrap their heads around, one, the dire threat that outsider Trump was seen to be posing to the Deep State and to the ease with which it held sway under President Barack Obama; and, two, expected immunity from prosecution if Deep State crimes were eventually discovered after the election, since ‘everybody knew’ Hillary Clinton was going to win. Oops.

There seems to be an outside chance, this time, that the culprits who did actually interfere in the 2016 presidential election in an effort to make sure Trump could not win, and then did all in their power to sabotage him after he his electoral victory, will be held to account by unusually feisty members of the House. It is abundantly clear that members of the House Intelligence and House Judiciary Committees are now in possession of the kind of unambiguous, first-hand documentary evidence needed to get a grand jury convened and, eventually, indictments obtained.

It is no exaggeration to suggest that the Republic and the Constitution are at stake. A friend put it the way:

“When GW Bush said of the Constitution, ‘It’s just a goddam piece of paper,’ I thought it was just another toss-off bit of hyperbole as he so often would utter. Not so. He, and many in his administration (and out) sincerely believe it and set out to make it so. They may actually have succeeded.”

I almost feel sorry for what is called ‘mainstream media’ and – even more so – for the majority of Americans deceived by the prevailing narrative on Russia-gate.  Even though that narrative now lies in shreds, there is no sign so far that the pundits will fess up and admit to spreading a far-fetched, evidence-impoverished story that was full of holes from the get-go.

Even vestigially honest journalists of the old school, who may themselves have been taken in, will have a Herculean challenge if they attempt to write to right the ship of journalism.  As for brainwashed Americans, pity them.  It is far easier to deceive folks than to convince them they have been deceived, as Mark Twain once wrote.

From today’s online version of the New York Times, for example, the lede headline read, “Taunted by Trump and Pressured From Above, McCabe Steps Down as F.B.I. Deputy.”

The Times quotes Representative Adam B. Schiff, the top Democrat on the House Intelligence Committee, giving hypocrisy a bad name. Schiff said yesterday that it had been a “sad day” for the committee and that Republicans had voted “to politicize the intelligence process.”

And this just in: an op-ed from NYT pundit David Leonhardt, titled – you guessed it – “The Nunes Conspiracy.”

“Instead of evidence, the memo engages in the same dark and misleading conspiracy theories that have characterized other efforts by President Trump’s allies to discredit the Russia investigation,” Leonhardt wrote. “But the substance of the claims isn’t really the point. Distraction is the point, and the distraction campaign is having an impact.”

And so it goes.

Ray McGovern works with the publishing arm of the ecumenical Church of the Savior in inner-city Washington. He was a CIA analyst for 27 years and co-founded Veteran Intelligence Professionals for Sanity (VIPS).