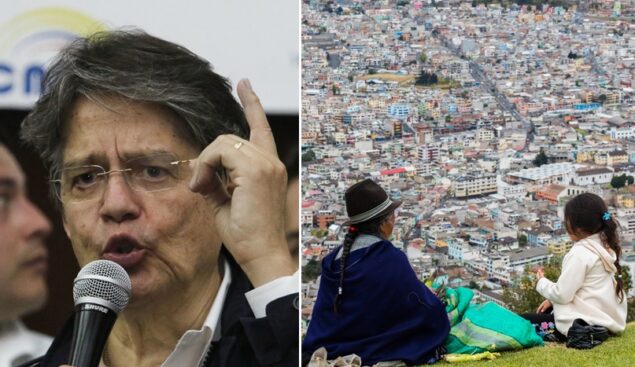 Guillermo Lasso, a former banker with close ties to the US, won the second round of Ecuador’s presidential election on 11 April, defeating progressive candidate Andrés Arauz. And his victory is likely to be a disaster for workers and oppressed people throughout the country.

Guillermo Lasso, a former banker with close ties to the US, won the second round of Ecuador’s presidential election on 11 April, defeating progressive candidate Andrés Arauz. And his victory is likely to be a disaster for workers and oppressed people throughout the country.

With most votes counted, Lasso had secured around 52%. He embraced some centrist positioning in his campaign, including proposing to raise the minimum wage, protect the rights of women and end discrimination against LGBTQIA+ people. But he’s a staunch supporter of the extreme capitalist doctrine of neoliberalism; and he will likely intensify the economic, political and social attacks the Ecuadorian people have faced in the last four years.

The left’s defeat follows on from the political betrayal of Lenín Moreno, who became president in 2017 with the support of incumbent president Rafael Correa and had promised to build on the latter’s progressive achievements. Moreno instead launched austerity attacks; and he aligned Ecuador firmly with US foreign policy interests.

With Moreno in power, the US saw its chance to weaken the left. And to do this, it collaborated closely with the Ecuadorian state, business class and media.

Indeed, Lasso’s victory wasn’t about him gaining more support than in his last run for president. Because in 2017 he got 4.8 millionvotes, but he only got 4.65 million in 2021. His win was more about Arauz getting just 4.2 million votes in comparison to Moreno’s 5 million in 2017.

A big defeat for the left

Andrés Arauz stood on a platform of returning Ecuador to Correa’s progressive project. But as a relatively unknown candidate, he was unable to defeat the combined forces of US imperialism, its regional allies, and the Ecuadorian right.

While Arauz received the backing of an influential indigenous leader, his campaign was damaged in part by a call for abstentions from other sections of the indigenous movement, some of which had links to the US (in particular failed indigenous candidate Yaku Pérez, who prominently called for supporters to spoil their ballots). There were around 1.7 million null votes in the end. When Correa was in power, he clashed with indigenous movements on several occasions; and while Arauz acknowledged these issues during his own campaign, tensions remained.

The US and its allies have not crushed the left, though. The 47% of support that Arauz received is testament to that.

The IMF-inspired neoliberal agenda Lasso will pursue is deeply unpopular and will inevitably face mass opposition. Outgoing president Moreno pursued such an agenda himself and became one of the most unpopular Latin American presidents in modern times as a result. His policies provoked a massive anti-IMF uprising in October 2019 and caused his personal approval rating to plummet from 77% in 2017 to 7% in 2020. The true character of Lasso’s regime will be revealed when he’s in office; and his political honeymoon may be even shorter than Moreno’s.

Western mainstream media coverage of Lasso’s victory has largely ignored the history of US influence and interference in Ecuador (and Latin America in general).

The US has a long history of intervention in Latin America to promote its own interests – from sponsoring military coups and backing dictatorships to launching economic warfare. And it still treats the continent as its ‘backyard’ nearly 200 years after the infamous Monroe Doctrine was first declared.

In the first decade of the 21st century, the US faced a huge challenge to its project of subordinating Latin America, as a wave of left-wing governments took office across the continent – rejecting the neoliberalism that had impoverished so many millions of people.

Ecuador joined this ‘Pink Tide’ when Rafael Correa became president in 2007. His government slashed poverty from 36.7% in 2007 to 21.5% by 2017, lifting more than 1.5 million people out of poverty through progressive social reforms and building infrastructure.

Unacceptably to the US, Correa also pursued an independent foreign policy. His government kicked a US military base out of the country, gave asylum to Julian Assange, pursued mutually beneficial economic relations with China, and tried to make US oil company Chevron pay for the damage its oil spill caused in the Amazon.

Washington took a number of steps to fight back in both Ecuador and elsewhere. One of these was ‘lawfare.’

In the ominous words of Hillary Clinton in 2009, “having a functioning democracy isn’t enough in Latin America, we have to support these countries to have strong, independent judiciaries”. The implication: ‘there must be levers independent from the will of the people to intervene in the continent’s political processes’.

US allies have attempted to use judiciaries to attack the most popular left-wing leaders in Latin America with the goal of decapitating the left of its most commanding figures. Elections can effectively be rigged by preventing the left from putting forward their chosen candidates, by either throwing them in jail or forcing them into exile.

This approach had a devastating impact on Brazil, where former president Lula da Silva was jailed and blocked from standing in the 2018 presidential election against far-right candidate Jair Bolsonaro. Opinion polls showed Lula would have won by a landslide had he been on the ballot paper.

That Lula was the victim of a witch-hunt has now been exposed with the decision of Brazil’s Supreme Court to annul his corruption convictions in March 2021. But jailing Lula paved the way for Bolsonaro to win in 2018, and his rule has been catastrophic. Around 360,000 people, for example, have died so far as a consequence of his appalling handling of the Covid-19 pandemic.

A similar lawfare offensive took place in Ecuador too, with Moreno persecuting both Correa and his allies. This helped to prevent a truly free and fair presidential election in 2021.

On 7 April 2020, a court sentenced Correa (already living in exile in Belgium) to eight years in prison on trumped-up charges of corruption. The apparent goal was to stop him returning to Ecuador and standing as Arauz’s vice president. This came after a referendum from Moreno in 2018 that effectively banned Correa from running again for president by retrospectively imposing term limits.

In addition to Correa not being able to participate, his new party was also barred from registering as a political party. This forced the movement to put Arauz forward on a different electoral platform, the Union for Hope.

Arauz, meanwhile, faced bogus corruption charges, including the claim that he received funding from Colombia’s National Liberation Army (ELN). This was part of a concerted campaign of disinformation to inflict damage on Arauz’s campaign.

The US-led hybrid war on Ecuador’s left has succeeded in electing right-wing banker Lasso. But he won’t have it easy. Because Moreno’s neoliberal policies have already seen the country’s economy contract by 7.5% in 2020 and led to one of the worst coronavirus catastrophes of 2020. Morgues overflowed, leaving dead bodies lining the streets.

The left, meanwhile, remains a major political force in Ecuador and will resist the avalanche of attacks to come. But it will need all the international solidarity it can get as it struggles against political persecution, to defend ordinary people’s living standards, and to resist the offensive on basic democratic rights and sovereignty.