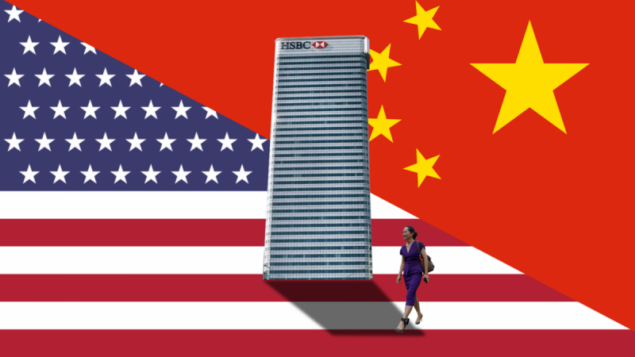 There are strong grounds to believe that the US government’s allegations against Huawei executive Meng Wanzhou are political in nature. Illustration by Canadian Dimension.

The National Post is apoplectic again. This time, the target of the Post’s ire is an online event held in November by the Canadian Foreign Policy Institute, the Canadian Peace Congress and the Hamilton Coalition to Stop the War, entitled “Free Meng.”

This time, the target of the Post’s ire is an online event held in November by the Canadian Foreign Policy Institute, the Canadian Peace Congress and the Hamilton Coalition to Stop the War. Entitled “Free Meng,” the event was organized in anticipation of the second anniversary of the arrest of Meng Wanzhou, the Huawei executive being detained in Vancouver pursuant to an extradition request of the Trump administration.

The keynote speakers for the event were planned to be Green Party of Canada MP Paul Manly and NDP MP Niki Ashton (Manly ultimately participated, but Ashton withdrew and instead provided a written statement after the NDP distanced itself from her stance on the issue).

In an op-ed published by the National Post on November 23, columnist John Ivison accused the event’s organizers of demonstrating “a reflexive contempt and loathing toward the United States that excuses any and all atrocities by other nations.”

The facts, however, tell a different story.

The background of Meng’s arrest

Forty-six year old Wanzhou Meng resides in China. She is a Chinese citizen and does not hold citizenship in any other country. For the past 25 years, she has worked for Huawei Technologies Co. Ltd., China’s largest telecommunications company, holding the position of CFO and Deputy Chairwoman of the Board.

On December 1, 2018, Meng was travelling from Hong Kong to Mexico, with a stopover in Vancouver. Before she could board her connecting flight, she was arrested at Vancouver Airport.

Three months earlier, a US District Court Judge had issued a warrant for Meng’s arrest. The warrant arose from US government allegations that, starting in 2009, Meng and others conspired to make misrepresentations to HSBC, a British bank, to induce HSBC to continue to provide banking services to Huawei while the company was allegedly doing business through a subsidiary in Iran, which was subject to US sanctions. Meng denies the allegations.

The US government’s extradition request attempts to portray HSBC as a victim of Meng’s alleged fraud, but the bank’s sordid history makes the victimhood story hard to swallow. In 2012, HSBC agreed to pay a record $1.92 billion in fines to US authorities for allowing itself to be used to launder a river of drug money flowing out of Mexico and for violating US sanctions laws by doing business with customers in Iran, Libya, Sudan, Burma and Cuba.

To this day, no Court in Canada has evaluated the evidence upon which the US charges against Meng are based.

Among other flaws, Canada’s Extradition Act requires no sworn evidence at all to deprive a person of liberty. An unsworn allegation by a foreign official is all that is required.

Moreover, the accused does not have the normal procedural protections of the domestic justice system—full disclosure of all relevant evidence, sworn evidence, the right to challenge through cross-examination (the foreign official who has made the allegation can’t even be questioned), and the right to present evidence showing innocence.

Even worse, the unsworn allegation of the foreign official is “presumed” to be “reliable evidence.” That presumption reverses the presumption of innocence which lies at the heart of Canada’s criminal justice system.

The infamous case of Hassan Diab

Perhaps no case exposed the flaws of Canada’s extradition regime as much as that of Canadian citizen Dr. Hassan Diab.

In November 2008, when Diab was a sociology professor living in Ottawa, the RCMP arrested him in response to a request by French authorities. They falsely accused him of involvement in a 1980 bombing near a synagogue in Paris.

Diab was eventually extradited to France, largely on the basis of handwriting evidence. The judge ordered his extradition despite finding the French handwriting report “very problematic,” “very confusing,” and with “suspect conclusions.” The judge likened handwriting analysis to “pseudo-science,” and found merit in the defense argument that the flawed methodology used in the French handwriting analysis results in manifestly unreliable conclusions. Nevertheless, he ruled that Canada’s extradition law does not permit him to apply Canadian standards of evidence admissibility to foreign evidence.

After more than three years in solitary confinement in a French prison, Diab was released in 2018, based primarily on an overwhelming body of evidence showing that he could not have been in France in 1980 when the attack was perpetrated.

The Meng case: Abuse of process?

In Canada, one of the few means by which an accused can defeat an extradition request is by persuading the Court that the request is an “abuse of process.” That is precisely the position Meng has taken.

Meng’s abuse of process argument has three branches, each alleging a separate form of abuse.

In one branch of her abuse of process argument, Meng alleges that the US government has deliberately misstated evidence and withheld it from the Canadian Court. Earlier this year, Canada’s attorney general applied for an order summarily dismissing that branch of Meng’s argument, but in October 2020, the Court dismissed the attorney general’s request after finding that Meng’s allegations had an “air of reality.”

In another branch of her abuse of process argument, Meng alleges that the Trump administration is using her as a “bargaining chip.” There is compelling evidence to support that claim. As pointed out in a press release issued by Huawei in June 2020, a new book by Trump’s former National Security Advisor John Bolton reveals that Trump viewed the arrest and detention of Meng as a way of exerting political leverage on China. In The Room Where It Happened, Bolton writes: “At the December 7 [2018] White House Christmas dinner, Trump raised Meng’s arrest, riffing about how much pressure this put on China.”

According to Bolton, Trump viewed Meng’s freedom as a powerful bargaining chip in trade negotiations with the Chinese government. 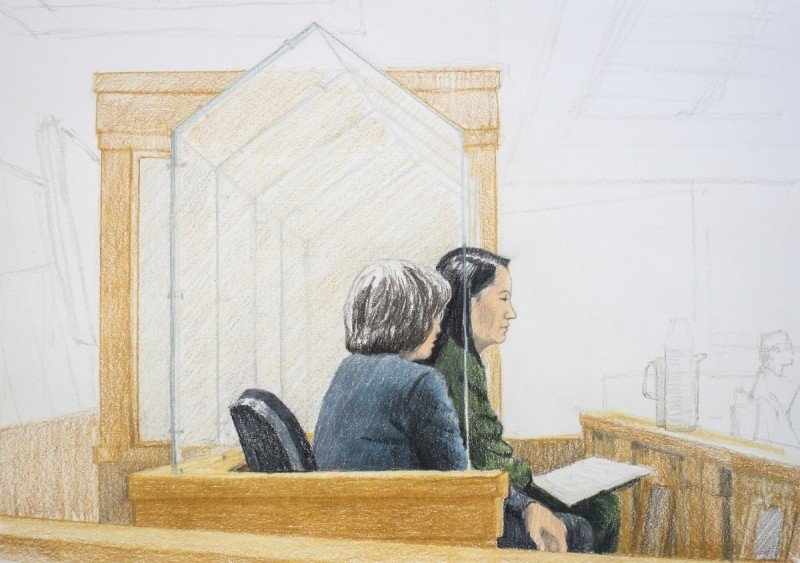 In this courtroom sketch, Meng Wanzhou sits beside a translator during a bail hearing at British Columbia Supreme Court in Vancouver, December 7, 2018. Illustration by Jane Wolsak.

The political character of the charges against Meng

Quite apart from Meng’s credible abuse of process arguments, there are strong grounds to believe that the US government’s allegations against the Huawei executive are political in nature.

Much has been made of the fact that Meng has been accused of fraud, but her alleged fraud relates to allegations that Huawei sought to circumvent US sanctions on Iran.

The principal justification advanced for those sanctions is that Iran is allegedly seeking to develop a nuclear weapon. Over a decade ago, however, the CIA confirmed that Iran halted its nuclear weapons program in 2003. More recently, just before the Trump administration withdrew from the Obama-era nuclear deal with Iran and re-imposed crushing sanctions on the country, the International Atomic Energy Agency confirmed that Iran was in compliance with the deal.

Not only is the principal justification for US sanctions on Iran demonstrably false, but both the US and its principal ally Israel—whose government fiercely opposes Obama’s nuclear deal with Iran and has strongly advocated for devastating sanctions on the country—both possess abundant nuclear weapons.

Indeed, the US is flagrantly violating its disarmament obligations under the Nuclear Non-Proliferation Treaty (NNPT) by dismantling the post-WWII arms control architecture and by embarking on a $1.7 trillion ‘modernization’ of its massive nuclear arsenal.

Similarly, Israel is the only state in the Middle East that possesses nukes and the only country in the region that is not a party to the NNPT or any of the major treaties regarding non-proliferation of weapons of mass destruction.

It ought also to be recalled that the US is the only country in history to have used these horrific weapons on civilian populations. At a moment when Japan was on the verge of surrender, the US intentionally incinerated between 129,000 and 226,000 Japanese (including tens of thousands of innocent children) by dropping atomic bombs on Nagasaki and Hiroshima. This surely constitutes one of the worst atrocities in the modern era, yet no US official was ever held accountable.

Efforts to prevent the proliferation of nuclear weapons are entirely laudable and should in fact be strengthened, but when it comes to lecturing other states about nuclear proliferation, the US government has no moral authority whatsoever. The Iran sanctions regime not only constitutes the height of hypocrisy, but it also inflicts untold suffering on innocent Iranians and impedes Iran’s ability to control the pandemic.

Moreover, there is a powerful argument to be made that US sanctions on Iran violate international law. In other words, the sanctions regime which Meng is alleged to have circumvented is itself illegal.

Ultimately, US sanctions on Iran have nothing to do with nuclear proliferation, nor do they have anything to do with the rule of law or human rights, as is amply demonstrated by US support for Saudi Arabia’s genocidal war on Yemen and its coddling of other human rights abusers around the world.

Rather, the sanctions regime upon which Meng’s extradition request is ultimately based is plainly motivated by the US government’s objective of acquiring hegemony over a region possessing vast reserves of conventional oil. Thus, not only are the Trump administration’s allegations political in nature, but they constitute the worst kind of geopolitics.

Dimitri Lascaris is a lawyer, journalist, activist and member of the Canadian Dimension coordinating committee. He was a candidate in the federal Greens’ leadership race, and finished second with just over 10,000 votes.