Why Israel is joining the Pentagon’s ‘Arab Nato’ 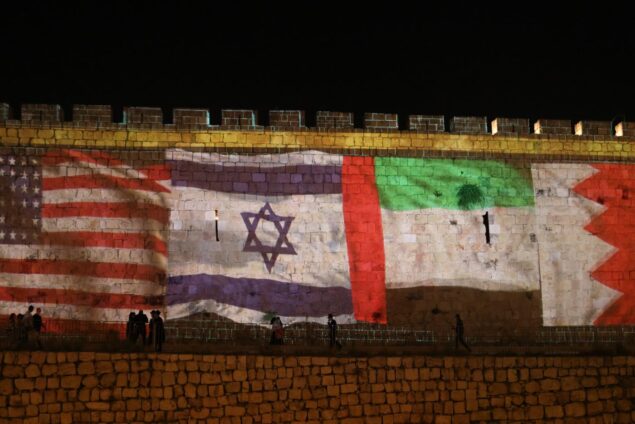 Flags of the US, Israel, the United Arab Emirates and Bahrain are projected on the ramparts of Jerusalem’s Old City in celebration of Israeli normalisation deals with the UAE and Bahrain, 15 September 2020 (AFP)

Israel’s inclusion in Centcom will further harm the Palestinian cause, drive a wedge between Arab states and raise the heat on Iran

With none of the usual fanfare associated with such a momentous decision, the Pentagon announced last month a major reorganisation to bring Israel – for the first time – inside its military command in the Middle East alongside the Arab states.

Until now, Israel has belonged to the US military’s European command, or Eucom, rather than the Middle Eastern one, known as Central Command, or Centcom. The decision effectively jettisoned the traditional wisdom that Israel’s inclusion in Centcom would increase friction between the US and Arab states, and would make the latter more reluctant to share intelligence or cooperate with the Pentagon.

Those concerns were felt especially keenly when the US had large numbers of troops in Iraq and Afghanistan. Back in 2010, David Petraeus, then Centcom’s commander, expressed fears that the price of too-overt military collusion with Israel could be exacted on US forces stationed in the region.

But Israel’s long-standing goal has been to force the Pentagon to restructure Centcom, and pressure had mounted from pro-Israel lobby groups in Washington in the final months of the Trump administration. The decision looked very much like a “parting gift” to Israel from President Donald Trump as he stepped down.

Israel’s formal transfer to Centcom has not yet taken place, but the move was cemented last week with the first visit to Israel by General Kenneth McKenzie, the current head of Centcom, since Joe Biden entered the White House. Alongside Israel’s military chief of staff, Aviv Kohavi, McKenzie planted a tree – officially to mark the Jewish holiday of Tu Bishvat but symbolically representing a new era in their strategic partnership.

On Friday, after a meeting with the US general, Benny Gantz, Israel’s defence minister, issued a statement praising the Pentagon’s reorganisation, saying it would “afford Israel opportunity to deepen cooperation with new regional partners and broaden operative horizons”.

The decision to bring Israel inside the US military command in the Middle East is best viewed – from Washington’s perspective – as the culmination of efforts to push the Arab states into public “normalisation” with Israel.

Military normalisation can now be added to the political, diplomatic and economic normalisation that formally began last September when two Gulf states, the United Arab Emirates and Bahrain, signed the so-called Abraham Accords with Israel. Morocco and Sudan have also announced their own peace deals with Israel, and other Arab states are likely to follow suit once the dust settles with the incoming Biden administration.

Since the signing of the Abraham Accords, the UAE has been forging strong trading ties with Israel and has helped to establish the Abraham Fund, designed to finance the infrastructure of occupation Israel has used to deprive the Palestinians of statehood. When flights to Dubai were launched in November, Israeli tourists poured into the UAE to take advantage of the new friendly relations and escape lockdown restrictions back home.

In fact, it is widely reported that such visits have become one of the main ways Israel has imported new variants of Covid-19. Last week, Israel effectively closed its borders – except to General McKenzie – to keep the virus in check.

On the face of it, Israel’s desire to move into Centcom – a kind of Middle East Nato covering several Arab states with which Israel still has hostile relations – appears counter-intuitive. But, in fact, Israel will make major strategic gains.

It will align US security interests in the region even more closely with Israel’s, at the expense of its Arab neighbours. It will aid Israel’s continuing efforts to crush the national ambitions of the Palestinians, with many Arab states’ either explicit or implicit cooperation. It will accentuate political tensions within the bloc of Arab states, further weakening it. And it will help to build pressure on recalcitrant Arab states to join the broader consensus against Israel’s one remaining significant regional foe: Iran.

It is significant that Washington’s long-standing concern about Israel’s presence in Centcom damaging US relations with the Arab states has apparently evaporated.

Once, the US was careful to distance itself from Israel whenever the Pentagon got deeply mired in the region, whether it was the US Gulf war of 1990 or the invasion and occupation of Iraq in 2003. Those calculations no longer seem relevant.

The move demonstrates a growing US confidence that the Arab states – at least those that matter to Washington – are unperturbed about being seen to make a military accommodation with Israel, in addition to political and economic engagement. It underscores the fact that the oil-rich Gulf states, alongside Israel, are now the key drivers of US foreign policy in the region and suggests that the most important, Saudi Arabia, is waiting for the right moment to sign its own accord with Israel.

Move out of the shadows

Israel, it is expected, will continue to conduct military exercises in Europe with Nato countries, but will soon be able to build similar direct relations with Arab armies, especially those being rapidly expanded and professionalised in the Gulf using its oil wealth. 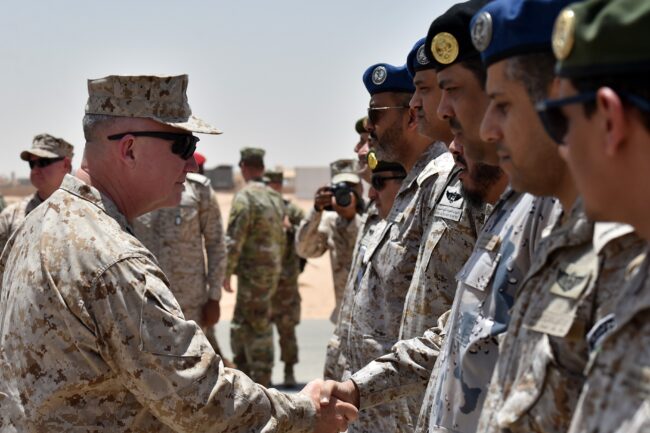 It is likely that Israeli officers will soon move out of the shadows and publicly train and advise the UAE and Saudi armies as part of their joint roles in Centcom. Israel’s particular expertise, drawing on decades of surveilling, controlling and oppressing Palestinians, will be highly sought after in Gulf states fearful of internal dissent or uprisings.

As the Israeli scholar Jeff Halper has noted, Israel has shown how effective it is at translating its military and security ties with armies and police forces around the world into diplomatic support in international bodies.

The Middle East is not likely to be different. Once Israel has become the linchpin of more professionalised armies in the region, those states dependent on its help can be expected to further abandon the Palestinian cause.

Another dividend for Israel will be complicating Washington’s relations with the Arab region.

Not only does Centcom operate major bases in the Gulf, especially in Bahrain and Qatar, but it leads the proclaimed “war on terror”, with overt or covert operations in several Arab states, including Iraq and Syria.

With Israel inside Centcom, the US and its most favoured Arab states are also likely to be more directly implicated in Israel’s major military operations against the Palestinians, such as the repeated ‘wars’ on Gaza

It will be harder for the US to disentangle itself from Israel’s own openly belligerent operations, including air strikes, in both countries, that are conducted in flagrant violation of international law. Tensions between the US and Baghdad have in the past escalated over Israeli air strikes in Iraq, with threats to limit US access to Iraqi airspace.

With Israel inside Centcom, the US and its most favoured Arab states are also likely to be more directly implicated in Israel’s major military operations against the Palestinians, such as the repeated “wars” on Gaza.

This will pose a significant challenge to the region’s cooperative institutions such as the Arab League. It is almost certain to drive an even deeper wedge between pro-Washington Arab states and those accused of being on the wrong side of the “war on terror”.

The result could be a regional divide-and-rule policy cultivated by Israel that mirrors the decades-long, disabling divisions Israel has generated in the Palestinian leadership, most pronounced in the split between Fatah and Hamas.

The biggest bonus for Israel will be a more formal alliance with Arab states against Iran and shepherding more ambivalent states into Israel’s orbit.

That appears to have been the purpose of the recently well-publicised reconciliation between the UAE and Saudis on one side and Qatar on the other, achieved in the dying days of the Trump administration. One of the chief causes of the lengthy blockade of Qatar related to its insistence on maintaining political and economic ties with Tehran. 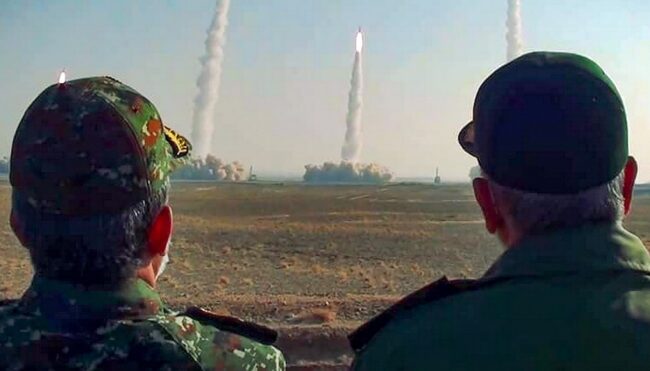 Israel’s aim is to force the Biden administration’s hand in continuing Trump’s belligerent anti-Iran policy, which included aggressive sanctions, assassinations and tearing up the 2015 nuclear agreement with Tehran signed by Barack Obama. That deal had given inspectors access to Iran to ensure it did not develop a nuclear bomb that might neutralise the strategic clout Israel gains from its nuclear arsenal.

Once Israel has become the linchpin of more professionalised armies in the region, those states dependent on its help can be expected to further abandon the Palestinian cause

Inside Centcom, Israel will be able to work more closely with Gulf allies to sabotage any efforts inside Washington to revive the nuclear accord with Tehran. That point was underscored last week when an online security conference, hosted by Tel Aviv University, was attended by two Gulf ministers.

At the conference, Kochavi, Israel’s military chief of staff, issued an unprecedented public rebuke to Biden over recent statements that he wished to revive the nuclear deal. Kochavi called the agreement “bad and wrong strategically and operatively”, claimed that Iran would launch nuclear missiles at Israel once it had them, and declared that a go-it-alone attack by Israel “must be on the table”.

Bahrain’s foreign minister, Abdullatif al-Zayani, observed that Israel and the Gulf states would have a better chance of preventing any US conciliation towards Iran if they spoke in a “unified voice”. He added: “A joint regional position on these issues will exert greater influence on the United States.”

That view was echoed by Anwar Gargash, the UAE’s foreign affairs minister.

In a sign of how the Biden administration is already fearful of taking on a broad Middle Eastern alliance against Iran, the new president’s pick for secretary of state, Antony Blinken, said last month it was “vitally important” to consult with Israel and the Gulf states before re-entering the deal.

Israeli Prime Minister Benjamin Netanyahu, desperate to bolster his electoral fortunes and deflect attention from his looming corruption trial, has every incentive to prise open that chink.

Ensuring Iran remains the Middle East’s number one bogeyman – the focus of western hostility – is in the joint interests of an Israel that has no intention of ending its decades-old obstruction of Palestinian statehood and of Gulf states that have no intention of ending their own human rights abuses and promotion of Islamic discord.

Mike Pompeo, Trump’s departing secretary of state, planted a landmine last month designed to serve Israeli and Saudi interests by highlighting the fact that a number of al-Qaeda leaders have found shelter in Iran. That echoed the Bush administration’s – in this case, entirely fanciful – claim of ties between al-Qaeda and Saddam Hussein as a pretext, along with non-existent WMD, for the invasion and occupation of Iraq in 2003.

With Israel’s arrival in Centcom, the lobbying for a repeat of that catastrophic blunder can only grow – and with it, the prospects for renewed conflagration in the Middle East.

This article is available in French on Middle East Eye French edition.