Ending US Aggression Against Cuba is Key to World Peace. 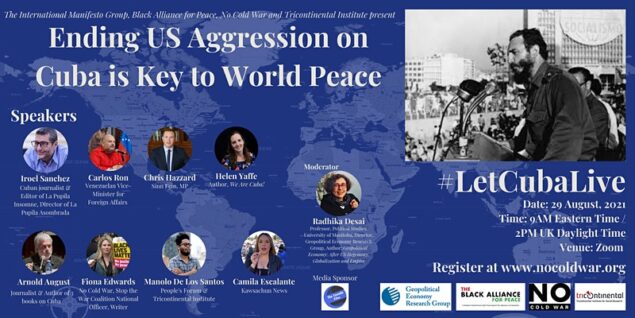 The Trump regime’s tightening of the US blockade on Cuba, with 243 new sanctions, has unfortunately been intensified by the Biden administration.

Despite the recent 184 to 2 vote in the UN General Assembly against the US economic blockade of Cuba, the new US Administration had imposed new sanctions going beyond even those of Trump.

These unilateral actions are a threat not only to Cuba but to world peace. They constitute an attempt by a single country to impose its policies on the international system, in pursuit of a cold war, in defiance of the overwhelming majority of other countries. Success in such a policy would undoubtedly lead to further aggression and defiance of international bodies and opinion.

Clearly the aim of this is to increase hardship for the Cuban people and provoke a “colour” counter-revolution – to try to regain control over the island which 60 years ago broke free of colonial control.

The attack on Cuba’s people comes when forces seeking national independence social progress and economic development are strengthening across Latin America – as recent elections in Bolivia and Peru and the US inability to overthrow the Bolivarian government of Venezuela attest. In Brazil, the left’s candidate, Lula, has a 26% poll lead for the 2022 Presidential election compared to the candidate of the right and the US – Bolsonaro.

By punishing the Cuban people, the US clearly intends to send a threatening message in particular to all Latin Americans: this will be your fate if you resist our demands.

Therefore, today is a crucial moment for all those who stand for national independence, for social justice and equality and for a multilateral world as opposed to unilateral diktats of a single country, to understand the importance of this situation for every country and to add their voices in opposition to the US unilateral policy against Cuba.

This international meeting analyses why Ending US Aggression Against Cuba is Key to World Peace.

This meeting is presented by the International Manifesto Group, Black Alliance for Peace, No Cold War and Tricontinental: Institute for Social Research.

The Media Sponsor for this event is the Canada Files.

Iroel Sanchez holds a degree in computer engineering from the Universidad Tecnológica de La Habana (CUJAE). He has served as director of Casa Editora Abril and president of the Cuban Book Institute. From 2000 to 2009, he chaired the organizing committee of the Havana International Book Fair. He is the founder of the La Jiribilla cultural journal. He founded and coordinates the development of the EcuRed collaborative encyclopedia, the Cuban version of Wikipedia. He edits La Pupila Insomne, one of the most widely read blogs in Cuba. He is a member of the Cuban Journalists’ Union and has sat on the International Committee of the World Gathering of Bloggers. He has lectured at universities in Cuba, Spain, Brazil, and Venezuela and has spoken at international communication and computer science events in Latin America and Europe. He is a regular contributor to the TeleSur, Al Mayadeen, and Russia Today international television channels. He directs the television program La Pupila Asombrada.

Carlos Ron was born in Caracas, Venezuela (1979). He serves currently as Vice Minister for North America at the Ministry of People’s Power for Foreign Relations and is also the President of the Simon Bolivar Institute for Peace and Solidarity Among Peoples. As a diplomat, he was Venezuela’s Chargé d’affaires to the United States of America (2017-2018), and he has represented Venezuela before the United States of America (2014-2018) and the Federative Republic of Brazil (2010-2014). He was an adviser at the Office of Presidential International Relations (2006-2010), Coordinator of the Research Program on Regional Integration and Multilateral Agreements at the Miranda International Center (2006). He graduated in Latin American Studies from Rutgers University, USA, and also has a postgraduate degree in International Relations from the University of Brasilia, Brazil.

Chris Hazzard is an Irish Sinn Féin politician who has been the Member of Parliament for South Down since the 2017 general election. He was a member (MLA) of the Northern Ireland Assembly for the South Down constituency from April 2012. He was the Minister for Infrastructure in Northern Ireland from May 2016 until the Executive’s collapse in January 2017. He is a passionate advocate for rural Ireland. He was a signatory of the Open Letter ‘Let Cuba Live’ which appeared in the New York Times calling for the sanctions on Cuba brought in by Donald Trump to be lifted immediately.

Helen Yaffe is a Senior Lecturer in Economic and Social History at the University of Glasgow, specialising in Cuban and Latin American development, and a Visiting Fellow at the Latin America and Caribbean Centre at the London School of Economics. Since 1995 she has spent time living and researching in Cuba. She is a founding member of Rock Around the Blockade, a British campaign in solidarity with Cuba. She is the author of We Are Cuba! How a Revolutionary People Have Survived in a Post-Soviet World (Yale University Press, 2020) and Che Guevara: the Economics of Revolution (Palgrave Macmillan, 2009).

Arnold August is a Montreal-based author and journalist (MA Poli Sci, McGill University). He has written three books on Cuba: 1. Democracy in Cuba and the 1997-98 Elections, 2. Cuba and Its Neighbours: Democracy in Motion (“A tour de force from an expert who clearly know his field well”, Tony Kapcia, University of Nottingham), 3. Cuba-US Relations (“Any open-minded discussion about the asymmetrical Cuba-U.S. relations should start with this highly readable, informative book”, James D. Cockcroft, three-time Fulbright Scholar). Arnold, an award-winning journalist, is published in English, Spanish and French in North and South America, Europe and the Middle East

Fiona Edwards is a co-founder and member of the international organising committee of the No Cold War campaign and a journalist focused on progressive struggles in Latin America and on the US cold war against China. She is also a National Officer of the Stop the War Coalition in Britain.

Manolo De Los Santos is a researcher and a political activist. For 10 years, he worked in the organization of solidarity and education programs to challenge the United States’ regime of illegal sanctions and blockades. Based out of Cuba for many years, Manolo has worked toward building international networks of people’s movements and organizations. In 2018, he became the founding director of the People’s Forum in New York City, a movement incubator for working-class communities to build unity across historic lines of division at home and abroad. He also collaborates as a researcher with Tricontinental: Institute for Social Research and is a Globetrotter/Peoples Dispatch fellow.

Camila Escalante is the woman behind Kawsachun News, a media outlet based in Bolivia, and also known for her correspondent work reporting around Latin America. Camila’s family are FMLN revolutionary former combatants. She has previously been based in Quito, Havana and Caracas. She is currently based in Trópico of Cochabamba and reporting on campesino movements across the continent. She will be on the ground covering the upcoming elections in Nicaragua and Venezuela.