Why do we punish the peacemakers? 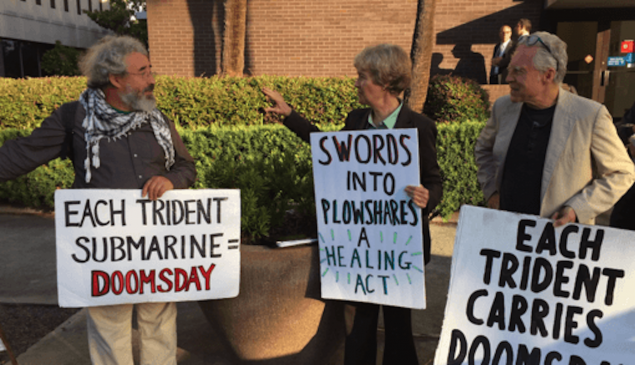 (L to R) Brian Terrell, Mary Yelenick and Anthony Donovan, vigil with signs outside the courthouse. (Photo by the author.)

We should be thanking, not jailing, the Kings Bay Plowshares 7 and the many who came before, and will come after. This is because, when you cover a Plowshares trial, you quickly discover that not at all the heroes are in the dock.

You’re liable to run into trouble if you try to suggest there is a greater threat to planetary survival than climate change. But there is. It’s called nuclear war.

Granted — and thank goodness — climate change is finally all the rage now. Rage has taken over, and rightly so, especially among the young whose future has been effectively ruined by the inaction of their elders.

There is no arguing that the climate crisis is an emergency. We have left it so late that the steps we must take have likely become unachievable — such as never extracting another drop of oil, another lump of coal, or another whiff of gas from the earth ever; starting now.

We are in a desperate scramble to save ourselves.

Meanwhile, the fact that we could set omnicide in motion with one deliberate or accidental push of the nuclear button is all but ignored.

You could argue that presenting people with the prospect of global annihilation is so overwhelmingly horrible it just paralyzes them into inaction.

But why then, faced with a similar outcome, are people galvanized into action on the climate emergency? But not nuclear weapons?

This is not to say that we should be choosing one or the other. Both are existential threats, and whereas we used to argue that climate change was a lingering death versus nuclear war an instant one, that’s no longer true. The climate crisis is upon us. We are dying because of it right now.

However, to completely ignore a human-made threat that could annihilate virtually every living thing is extraordinarily ostrich-like behavior (albeit ostriches don’t really stick their heads in the sand, but the metaphor has, well, stuck.)

Such inaction isn’t true universally of course. There is a certain population who continue to protest nuclear weapons. And they are largely the same some people who have always done it. They are gray-haired and tired and utterly dedicated. Most of them are over 60. A lot more of them are pushing 80 or even in their 90s. There is a resoluteness to the anti-nuclear war movement that is hard to match anywhere else, a remarkable stick-with-it-ness.

Some of them, as Jack Cohen-Joppa’s recent story on our pages described, are prepared to go to jail in their efforts to draw attention —  and put an end — to deadly nuclear weapons. They are willing, even eager, repeat offenders. Many are part of what is known as the Plowshares movement.

Like Cohen-Joppa, I, too, was in Brunswick, Georgia in October, to cover the trial of the latest such  Plowshares action, as seven activists faced the consequences of breaking into the Kings Bay Trident submarine base. The trial took place inside a dreary 1950s courthouse building originally intended as a fallout shelter in the event of a nuclear attack. Oh the irony!

Four of the Kings Bay defendants at a talk before the trial. (Photo: the author)

The first thought that comes to mind when covering a trial like this is “why on earth are we so intent on punishing good, sincere and peaceful people who are trying to prevent the worst possible crime against humanity?”

Just how insane would that proverbial Martian think us to be were he/she to watch us wage this tiny courtroom drama against such decent and caring people rather than joining together as one species in a united global effort to save ourselves from the climate crisis? And abolishing nuclear weapons to boot.

Obviously, we should be thanking, not jailing, the Kings Bay Plowshares 7. And the many who came before, and will come after. Because, when you cover a Plowshares trial, you quickly discover that not at all the heroes are in the dock.

Throughout the trial, there was a permanent vigil of sign-carrying supporters outside the courthouse. One afternoon, I stopped and chatted with a member of this dedicated crew. He was holding a poster with a picture of the Kings Bay Plowshares 7.

I learned I was talking to Daniel Sicken. He had been part of a Plowshares action on August 6 1998, marking the Hiroshima and Nagasaki anniversaries. He and Olivier Sachio Coe (Ko-Yin) had entered a U.S. Air force Minuteman III strategic nuclear missile silo in northeast Colorado. There they had symbolically disarmed the weapon by hammering on it and pouring blood.

“Did you go to jail?” I asked Sicken, now 77. “Oh yes,” he said almost cheerfully. “I spent three years in federal prison for that!” 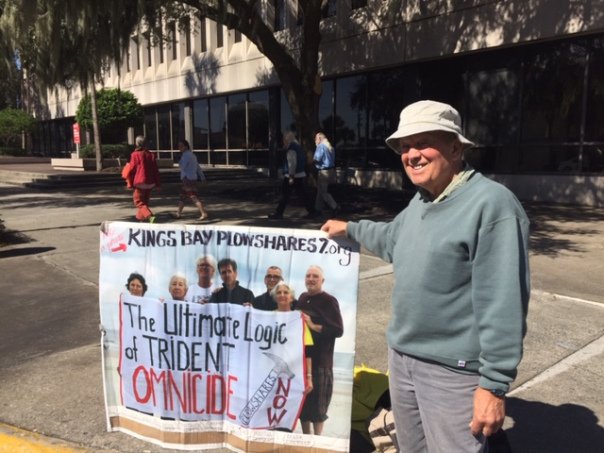 Daniel Sicken, who spent three years in jail for his own Plowshares action. Photo: the author

There were heroes among the courtroom audience, too — by Cohen-Joppa’s count, at least eight others who had been arrested and/or done jail time protesting nuclear weapons.

One of them was Nukewatch’s John LaForge, who handed me a flier describing his own August 1984 action, and subsequent trial and conviction. The document featured one of the more surprising things I had ever read — a powerful statement from his trial judge who refused to inflict the expected 10-year sentence on LaForge and his co-defendant, Barb Katt. The two had walked onto the Sperry Univac plant in Eagen, Minnesota, and smashed launch-control computers being built for Trident missile-firing submarines.

Judge Miles Lord’s sentencing speech is such a powerful testament to justice, reason and good sense, that we reproduce it in full, within LaForge’s own article about it, on these pages this week.

The seven Kings Bay defendants are still awaiting sentencing — likely some time in January — but expectations are not as rosy as the surprise decision rendered LaForge and Katt.

Unless, of course, federal judge Lisa Godbey Wood chooses to take inspiration from the two portraits gracing the walls of her courtroom, and that, during the trial, stared right down at the defendants’ table directly below them. One was English martyr, Sir Thomas More, the other Justice Anthony A. Alaimo, after whom the courtroom itself was named.

Yet more irony! More, the author of Utopia, went willingly to his death for his religious beliefs, refusing to acknowledge his king and former pupil, Henry VIII, as the head of the Church of England. More also refused to endorse Henry’s divorce from his Catholic wife, Catherine of Aragon.

Alaimo also defied laws he found abhorrent when he was a prisoner of war in Nazi Germany during World War II. While held at Stalag Luft III prison camp, Alaimo participated in the long undetected tunneling effort that eventually became known as “the Great Escape”. (He recounts this story, much later, in the video below.)

Stalag Luft III was known as “the most secure prisoner of war camp in the heart of Hitler’s Germany”. America’s nuclear weapons facilities are similarly described — although the ease with which protesters have been able to enter them, and the time it has taken on each occasion to detect and apprehend them, certainly begs that question more than a touch.

The record for lurking about undetected on one of these “secure” military properties may just have gone to Sylvia Boyes, who spent 12 hours on the Coulport military base between November 19 and 20. Coulport, located on Loch Long in Argyll, Scotland, is the storage and loading facility for the nuclear warheads of the United Kingdom’s Trident program.

Boyes cut and breached two areas of fence and eventually walked to the main gate to hand herself in, so arguably she was never actually “detected” at all! Her activism dates back to the Greenham Common protest days and, like her Plowshares compadres, she is a “repeat offender.” 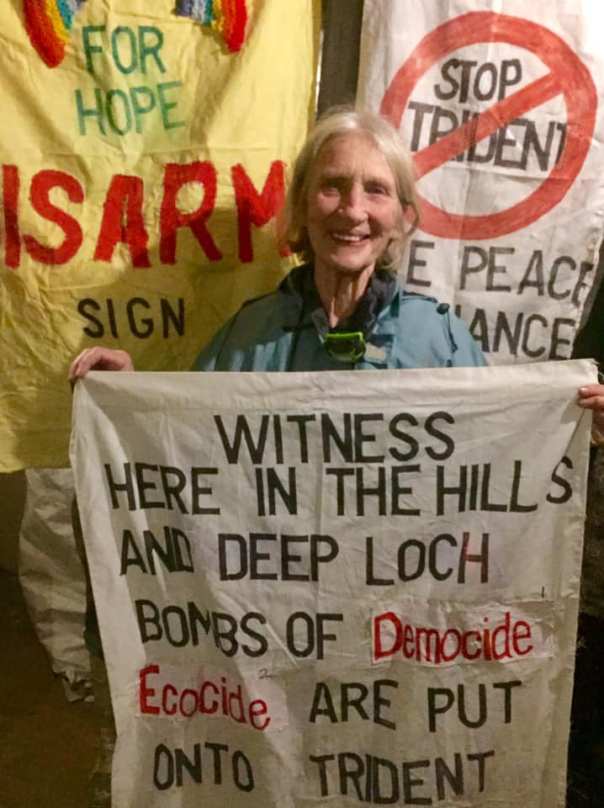 Just like the two heroes watching over them, the seven defendants below the portraits had challenged something they viewed as illegal and immoral — nuclear weapons. They held fast to their religious beliefs, no matter the punishment. They felt compelled to carry out their actions and quite certain that they were preventing, rather than committing, a crime.

The trial could have been avoided altogether. The prosecution had earlier offered the seven a plea deal — plead guilty to one felony and the trespass misdemeanor, and take the consequences.

But the defendants — Mark Colville, Clare Grady, Martha Hennessy, Fr. Steve Kelly, Liz McAlister, Patrick O’Neill and Carmen Trotta — declined. They wanted their day in court for the same reason that they committed the act itself — to draw attention to the deadly peril we all live in every day due to the existence of nuclear weapons.

And so for the better part of four days, until they were convicted, they got that chance. But did it work?

This was a jury of locals, all of whom live within the shadow of the greatest death machine ever created by human kind. As O’Neill had written before the trial began, Trident missiles, if launched, could kill twice the population of people currently living on planet Earth.

But no one felt strongly.

This is a problem.

None of the Kings Bay Plowshares 7 would say their actions — and indeed their personal sacrifice, although they would not describe it as such, — were wasted. But they also noted that the mainstream media largely chose to ignore their case. National press coverage was in short supply, other than by valiant stalwarts such as Democracy Now! and progressive religious outlets such as the National Catholic Reporter.

(Democracy Now!’s coverage of the verdict is below. Scroll to the 9:56 time code for the Kings Bay Plowshares segment.)

Out on the campaign trail, no one is asking the presidential candidates how they feel about the U.S. “upgrading” its nuclear arsenal rather than abolishing it, which it is duty bound to do as a signatory to the nuclear Non-Proliferation Treaty. And no one is asking if each of the candidates is comfortable with the proposed $1 trillion plus the U.S. will spend over the next 30 years for this “upgrade.” (Bernie Sanders has identified excessive defense spending as needing redress.)

It is this crime — the immoral squandering of our money and resources for such an unimaginably evil end — that the Kings Bay Plowshares 7 and the many before them, seek to draw attention to. But for people to notice, they must hear the message. If the messenger is the media and the media is silent, what else can be done?

In the UK there are four American Trident submarines, housed at Faslane on Gare Loch, adjacent to Long Loch where Sylvia Boyes was arrested. With a general election coming up on December 12, the Campaign for Nuclear Disarmament has decided to make the abolition of Trident a central issue for aspiring and incumbent members of Parliament.

“Now is the time to put nuclear weapons on the public agenda. So CND is taking action to make Trident an unignorable issue at this election,” said a CND campaign announcement.

“We’re about to launch a major campaign to lobby parliamentary candidates, to tell them that their views on nuclear weapons matter and can affect how we vote.

“The majority of us don’t want to see £205 billion wasted on replacing Trident — and we want newly elected MPs to oppose it.”

Here in the United States, we should be asking our political candidates — and those already in office — the same questions, and sending them the same message. Nuclear weapons should indeed by unignorable.

Linda Pentz Gunter is the editor and curator of BeyondNuclearInternational.org and the international specialist at Beyond Nuclear. She can be contacted at [email protected].