Why do politicians align with extremist JDL? 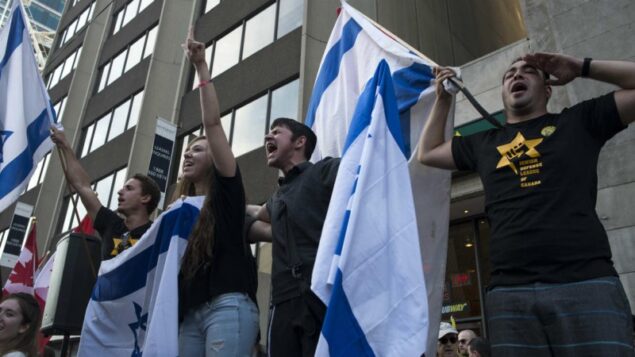 Was he a victim of an anti-Semitic attack or a violent, racist, right-wing provocateur?

Was he a victim of an anti-Semitic attack or a violent, racist, right-wing provocateur?

At the same time a counterprotest was held by Canada’s most influential and best organized fascistic group. About 100 Jewish Defence League members and supporters rallied in the hope of provoking or instigating a conflict. They succeeded and by the next morning the Centre for Israel and Jewish Affairs (CIJA) and B’nai B’rith were claiming a 55-year old Jewish man was beaten by pro-Palestinian protesters. By Sunday evening Toronto Mayor John Tory, Ontario premier Doug Ford, Conservative party leader Erin O’Toole and Prime Minister Justin Trudeau had all tweeted out about anti-Semitism at protests.

There is, of course, more to this story. Footage has emerged of the main “victim” – who is actually on the cover of a press release titled “CIJA Concerned by wave of violence and antisemitism connected to conflict in the Middle East” — wielding a knife and swinging a bat. Another video shows a JDL member swinging a stick wildly at another individual.

It is altogether unsurprising that the JDL would instigate a confrontation and then other Israel lobby groups would claim Jews were being attacked. A variation of this has taken place on numerous occasions. What was different on this occasion is that the JDL thugs appear to have bit off a bit more than they could chew and ended up running away.

With the tacit support of the Jewish establishment, the JDL have been a thuggish, racist, force in Toronto for half a century. During a stint living in Toronto in 2014 I was shocked to see the JDL in action and it altered my perspective on what drives Canadian policy on Israel. Amidst Israel’s brutal assault on Gaza that left over 2,100 Palestinians dead that year, I was shoved, had my bike damaged and lock stolen by members of the JDL at a protest on the grounds of the Ontario legislature. The following day at Queen’s Park, a JDL member who worked with children at the Schwartz/Reisman Jewish Community Centre and was on a B’nai Brith softball team, Isaac Ezra Nacson, knocked a pro-Palestinian counter demonstrator to the ground and kicked him in the face. Half an hour after Nacson’s attack, a JDL member walked some 50 metres around a barricade to where I was standing alone chanting at the pro-war rally and spat on me three times. Both incidents were caught on tape by major media outlets, but little was done.

Since that time the JDL has engaged in numerous violent acts and deepened its ties to the racist, far right. In the highest profile incident, a mob organized by JDL Toronto attacked counter-protesters at the 2017 American Israel Public Affairs Committee (AIPAC) conference in Washington, DC. They burned a Quran and tore a Palestinian flag. In the worst incident, a 55 year-old Palestinian-American teacher was punched, kicked and hit with flagpoles. Bruised across his body, Kamal Nayfeh needed 18 stitches around his eye. Thornhill JDL member Yosef Steynovitz was charged with assault causing significant injury and a hate crime.

Last summer JDL supporter Tamara Foster vandalized Foodbenders, a sandwich shop with “I Love Gaza” painted on its window. Similar to what Jewish supremacist settlers do to Palestinian homes in the occupied West Bank, Foster painted the Star of David onto the restaurant window. Soon after Foster’s vandalism, the JDL held a rally in front of the restaurant and during their hate fest they scrubbed off “Palestinian Lives Matter” and “Free Palestine” markings while making racist remarks.

As part of preparing a defamation lawsuit against the JDL on behalf of Foodbenders, lawyer Stephen Ellis has dug into the organization and its long-time leader, Meir Weinstein’s, history of violence and racism:

JDL Canada’s sister organizations in the US and Israel have been responsible for even more serious violence and hate crimes. In 2001 the FBI labeled the JDL a “right-wing terrorist group” after its members were convicted in a series of acts of terror, including the killing of the regional director of the American Arab Anti-Discrimination Committee and a plot to assassinate a congressman. A member of the JDL’s sister organization in Israel, Kach, killed 29 PalestinianMuslim worshipers in the Cave of the Patriarchs Massacre in 1994. Kach was set up by Meir Kahane who also co-founded the JDL in the US.

In 1984 Weinstein tried to help Kahane enter Canada illegally after the federal government rejected the American’s admission to this country. At the end of the 1980s Weinstein sought to formally establish a Kach party in Canada.

After Kach member and former US JDLer, Baruch Goldstein, murdered 29 Palestinians JDL Canada refused to condemn the 1994 Hebron mosque massacre. Weinstein said, “our organization does not condemn the attack. It condemns the Israeli government for not providing adequate protection for settlers.”

Despite all this racism and violence, the JDL is tacitly or actively supported by much of the Canadian Jewish establishment and other powerful institutions. They have co-sponsored demonstrations with B’nai B’rith and provided “security” for pro-Israel rallies. The JDL participates in the annual Walk for Israel organized by United Jewish Appeal of Greater Toronto. In a bid to get the Toronto city council to block Al Quds Day in 2019, Weinstein coordinated with B’nai B’rith leader Michael Mostyn, Centre for Israel and Jewish Affairs (CIJA) Vice President Noah Shack and city councillor James Pasternak, as highlighted in a photo of the four together at the city’s executive committee.

JDL has been allowed to recruit in Jewish schools and for many years the former head of the Canadian Jewish Congress, Bernie Farber, gave the group political cover. The same can be said for former Canada-Israel Committee board member Warren Kinsella, who spoke at a JDL meeting in 2009. These prominent liberals were fine with the JDL intimidating Palestinian solidarity activists but oppose its alliance with other racist, far right, groups.

Canadian Jewish News coverage of the group has often been sympathetic, including publishing video of a speech by Weinstein. In 2015 Barbara Kay penned a National Post column titled “In defence of the Jewish Defence League” and Honest Reporting Canada defended the group when the CBC’s coverage of them was critical. In 2017 the Toronto Sun published an article headlined “Jewish Defence League alleges hate crime” and after they stoked violence at York in November 2019 B’nai B’rith, CIJA and much of the rest of the Israel lobby accused pro-Palestinian activists of anti-Semitism. Despite much of it being caught on camera, JDL violence and racism was ignored.

In a similar vein, CIJA couldn’t bring itself to criticize the JDL thugs who beat a 55-year-old Palestinian professor and a younger Jewish activist outside AIPAC’s conference in 2017. Despite film of the attacks, CIJA spokesperson Martin Sampson responded to a National Post inquiry by simply stating, “the approachadopted by the JDL is not reflective of the mainstream Canadian Jewish community.”

The JDL has support at the highest levels of the Conservative party. During a 2015 meeting in Montréal JDL representative Julius Suraski claimed fourConservative MPs had recently attended a Passover dinner at his home. In 2014 former Prime Minister Stephen Harper brought Suraski on his official delegation when he traveled to Israel.

Considering their influence and racist, violent, ways there’s been far too little critical scrutiny or push back against the JDL. Yes, they have been banned from Facebook and Twitter on a number of occasions and York banned Weinstein from its campus. But the police have turned a blind eye to a number of their criminal acts and major media outlets and antiracist groups have generally ignored the JDL.

It’s time for this to change. The Jewish Defence League is a violent, racist, thuggish group that deserves to be treated like the dangerous, fascistic organization it is.