Why did Paul run for leadership of ‘anti-Semitic’ party? 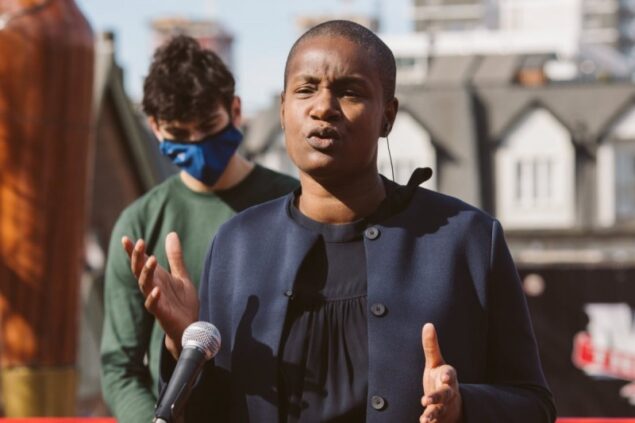 With the support of outlets ranging from Rebel News to the CBC, Toronto Star to National Post, Annamie Paul has turned a dispute about Israeli apartheid into a discussion about how Greens aren’t comfortable with a Black, Jewish woman leader.

With the support of outlets ranging from Rebel News to the CBC, Toronto Star to National Post, Annamie Paul has turned a dispute about Israeli apartheid into a discussion about how Greens aren’t comfortable with a Black, Jewish woman leader.

In doing so, she’s benefited from a media sphere that all but failed to cover the July “Open Letter to Media from Jewish and Racialized Members of Green Party of Canada” rejecting Paul’s portrayal of the conflict. Or Black Green activist Matthew Sloly, who was complaining about the whiteness of the party long before Paul joined, but opposes Paul (and patron Elizabeth May’s) autocratic and imperialist outlook.

To briefly recap my previous article on this subject, during the leadership race Paul worked in tandem with Israel lobby groups to attack Greens and ignored tens of thousands of racialized Canadians protesting apartheid in May. In defence of Israeli colonialism, Paul trampled on party democracy and threw her leadership into disrepute by refusing to distance herself from a senior adviser’s unhinged attacks against sitting Green MPs. In July she appointed Richard Zurawski to her shadow cabinet a few weeks after he wrote: “She [Paul] is pushing hard against the anti-Semitic factions, like the BDS terrorist group, within the GPC [Green Party of Canada] that is using the Middle East as a wedge to isolate and spread misinformation, hijacking the GPC mandate. It is sad to see their agendas being promoted by [MP Paul] Manly and [MP Jenica] Atwin.”

Despite this, Beisan Zubi, who some Palestine solidarity activists supported in her bid to represent the NDP in Kitchener, tweeted “I am Palestinian and also recognize that the vitriol Annamie Paul received had nothing to do with our human rights — Jenica Atwin caused us serious harm and was rewarded for it, and yet Annamie is all you remember? Let’s get some critical race theory up in here, okay?”

Zubi equating Paul and Atwin is farcical. The former Green MP called Israel an “apartheid” state and publicly labeled a statement Paul released during the upsurge in Israeli violence in May as “totally inadequate”. Atwin’s departure from the Greens also unraveled the leadership of a fanatically anti-Palestinian politician. Imagine if Atwin had not left the Greens and allowed Noah Zatzman’s smears and threats to stand without any real political cost.

When publicly announcing she was resigning as leader Paul offered a vivid metaphor about the discrimination she faced. Paul told the media: “What people need to realize is that when I was elected, I was breaking a glass ceiling. What I didn’t realize at the time is that I was breaking a glass ceiling that was going to fall on my head and leave a lot of shards of glass that I was going to have to crawl over throughout my time as a leader, and when I arrived at [the leaders’ debate], I had crawled over that glass, I was spitting up blood but I was determined to be there.”

Those following Paul’s actions since last summer’s leadership campaign recognize that she is weaponizing accusations of anti-blackness, anti-Semitism and sexism. But not long after Paul’s speech former Green leadership candidate Dimitri Lascaris, who was previously smeared by Paul, echoed her. The Canadian press reported that Lascaris “wants independent consultants to investigate Paul’s claims that she experienced racial bias while leader.”

Yes, Black women face multiple forms of oppression in Canadian society. There’s no doubt that some criticism leveled against her is tinged with racism and sexism. But the most flagrant and concerted discrimination on display in the Green drama is Paul’s anti-Palestinian racism. Why not investigate that?

The central issue has always been Palestine (which is connected to questions of party democracy and imperialism). The downward spiral for Paul began when she refused to distance herself from her senior adviser smearing and threatening to defeat Green MPs for expressing support for Palestinians. Palestine shapes the broader context as well. During the leadership race Elizabeth May placed her considerable influence within the party behind Paul’s candidacy partly to undermine Lascaris whom she clashed with over Palestine. Previously, I detailedthe incredible lengths to which May went in the hope of overturning a democratically determined resolution Lascaris sponsored in support of Palestinian rights.

The background in that article lends credence to ideas some have expressed in left wing Green forums about Paul, which has not been properly explored. That theory, which could be labelled a ‘conspiracy’ offers an alternative frame to interpret the Green saga.

That theory suggests Paul’s principal objective when she joined the leadership race was to undermine the party as part the Israel lobby’s broader anti-Green effort. (Because of the party’s pro-Palestinian positions.) While there are certainly some holes in this theory, there’s evidence to suggest it is neither off the wall nor an ‘anti-Semitic trope’.

Since members passed a pro-BDS resolution in 2016 the Israel lobby has had an interest in undermining the Greens. For a series of reasons, the party is ripe for an unabashedly pro-Palestinian leader, which could greatly destabilize the major party pro-Israel consensus in this country. With scores of Canadians employed full-time in unabashedly Israeli nationalist organizations, it would frankly be a dereliction of their duty if some had not considered a maximalist strategy to deal with the Green Party threat. Is it completely unthinkable that some Israel lobby representatives went looking for the ideal leadership candidate to cause as much damage to the party as possible?

Buried in a September 20 Jewish Independent article headlined “Annamie Paulputs it all on the line” is a remarkable bit about how “a loose coalition of Jewish groups and pro-Israel political consultants is now working behind the scenes to prevent candidates who have harshly criticized Israel from being elected this cycle, according to a source familiar with the effort who spoke with JI but asked to remain anonymous because of the sensitivity of the matter.” Manly and Elizabeth May are listed as targets.

The motive to target the Greens is solid and evidence of Paul undermining the party is strong as well. While the Israel lobby has been labeling the Greens anti-Semitic for years, Paul began doing so months before becoming leader. After winning a tight leadership race her team took a conflictual position towards the Green council and the eight other leadership candidates. Paul also helped throw the party into financial ruin by demanding a massive salary, instigating multiple legal suits and failing to win enough votes in the election to garner public refundsof expenses. Paul drove out one member of the Green parliamentary caucus and the plummeting Green vote nationally caused the defeat of Manly.

Since December 2016 the Greens have officially supported all three demands of the boycott, divestment and sanctions (BDS) movement. Their policy supports UN Resolution 194 calling for the right of Palestinian refugees to return, to “accord to the Arab-Palestinian population of Israel equal political and civil rights, and end Israel’s illegal occupation of the Occupied Palestinian Territories (OPT) and the Golan Heights, and Israel’s siege of Gaza.”

Zionists often categorize the BDS movement’s demands as the “destruction of Israel”. So, why did Paul join a party with that type of policy and run for its leadership?

In a long front page Toronto Star article on Saturday headlined ‘Will the Green Party survive?’: The inside story of how the Greens toppled Annamie Paul and tore itself apart in the process” Alex Ballingall quotes Israel supporter Noah Zatzman saying the party is irreparably tainted by discrimination. He claims, “they’ve declared, by the actions of their governance and the actions of council and the inability of Elizabeth (May) to basically say anything, that when it comes to racialized people, queer people and Jews, that none is too many.”

Paul has consistently refused to distance herself from Zatzman’s attacks on the party and its MPs. Her time as leader of the Greens certainly has resembled Sherman’s march to the sea during the American Civil War — destroying everything in her path. But only she can know if this was her motivation from the start.