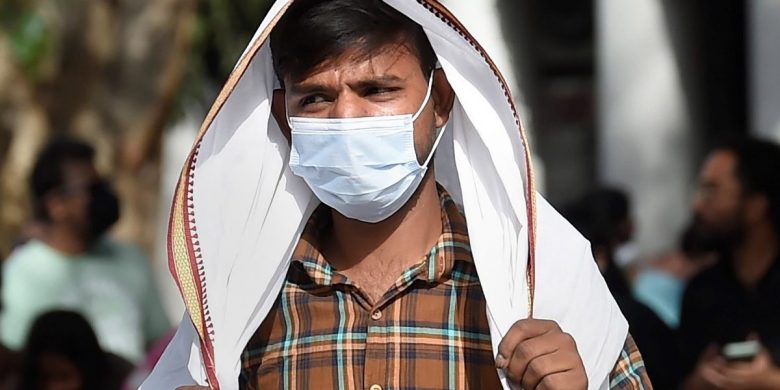 A man covers himself with a scarf to avoid the scorching heat on a hot summer day in New Delhi, Sunday, May 15, 2022. Photo: PTI/Kamal Singh

Delhi witnessed record high temperatures of around 49 degrees Celsius on May 15. The Indian Meteorological Department categorised it as a “severe heatwave”. The region, part of India’s northwest, has experienced multiple heatwaves over the last three months. Climate scientists say that a rain deficit is causing this spike in mercury. It is also a ‘compound event,’ of drought conditions overlapping with heatwaves.

Kochi: Delhi witnessed record high temperatures of around 49 degrees Celsius on May 15. The Indian Meteorological Department categorised it as a “severe heatwave”. The region, part of India’s northwest, has experienced multiple heatwaves over the last three months.

A rain deficit of 60-90% between March and mid-May in the region is the reason why, climate scientists said. According to them, this unusual heat is also a compounding effect of drought conditions and heatwaves. Additionally, NASA recorded urban heat islands in and around Delhi. Urban ‘heat islands’ are pockets of higher temperature caused due to concrete structures such as buildings. These heat islands could be aggravating the impacts of the heatwave.

The local weather forecast for Delhi released by the IMD on May 15 reported temperatures of above 45 degrees Celsius at several weather stations in the NCR region, tweeted Times of India. This included Lodhi Road, Jafarpur, Pitampura and Sports Complex. An IMD reportspecified heatwave to severe heatwave conditions over many parts of Delhi, Punjab, Haryana and Rajasthan on May 15.

Two automatic weather stations in the city, Mungeshpur and Najafgarh, recorded temperatures of over 49°C on Sunday, reported The Indian Express. However, these are new weather observatories and there is no previous data to compare these temperature patterns with. The lack of a “climatological profile” for these areas for at least 30 years means that they cannot draw conclusions about Sunday’s temperature, officials at the IMD were quoted as saying.

The lack of rain is possibly causing this, experts have said. Officials at the IMD told Hindustan Times that the lack of showers since March 1 is the main reason for the intense and prolonged heat spell across the region.

Roxy Mathew Koll, climate scientist at Pune’s Indian Institute of Tropical Meteorology, agrees. Indeed, the north-northwest states of India are facing a deficit of 60-90% or more from March to mid-May, he told The Wire.

“This is a perfect example of a compound event that IPCC has warned of, where dry/drought conditions overlap with heatwaves, aggravating the situation.”

One of the United Nations’ Intergovernmental Panel for Climate Change (IPCC) climate reports released in August last year had warned of ‘compound events’ becoming more common as global temperatures rise due to climate change. A compound event is one where two or more weather events which may not be necessarily extreme by themselves occur together, causing more severe impacts.

Do concrete jungles make it worse?

Delhi’s urban sprawl could be further compounding this ‘compound event’, making the heatwave worse for citizens.

On May 12, NASA’s Jet Propulsion Laboratory in California released a satellite image of urban heat islands in Delhi. Heat islands are pockets of higher temperature than surrounding areas. These are caused by concrete structures such as buildings and roads that absorb and re-emit more heat than other land-use types do.

The NASA’s Ecosystem Spaceborne Thermal Radiometer Experiment on Space Station instrument (also known as ECOSTRESS) measures ground temperatures from the International Space Station, at the highest spatial resolution of any satellite. Their satellite imagery identified heat islands in and around Delhi on May 5. 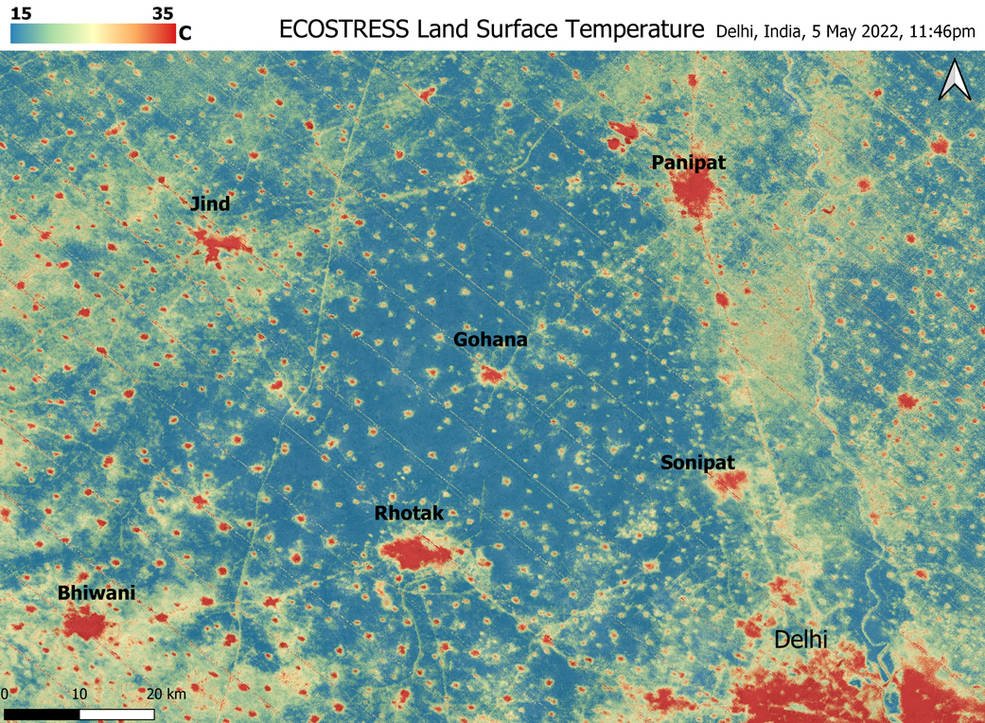 NASA’s ECOSTRESS instrument made this image of ground temperatures near Delhi (lower right), around midnight on May 5. The urban “heat islands” of Delhi and smaller villages peaked at 102 degrees Fahrenheit (39 degrees Celsius) while nearby fields were about 40 degrees Fahrenheit cooler. Image: NASA/JPL-Caltech

“This data suggests that city dwellers are experiencing considerably higher temperatures than the average temperatures reported for their regions,” the release read.

A recent study found that urban heat islands such as these can make cities warmer, over and above the warming caused by climate change. The global south, including developing countries such as India and China, will witness the most rapid urban land expansions. This makes the urban population of southeast Asia (including India) among the most at risk due to heat stress than previously expected, it found.

Meanwhile, the current heatwave is predicted to abate over the next few days in the capital, as per the latest report from the IMD. The IMD has also predicted that Delhi can expect lightning and gusty winds on May 16 according to Mint. 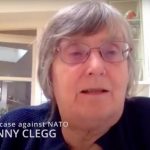 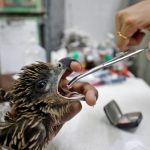