Who’s afraid of a general election? The rich 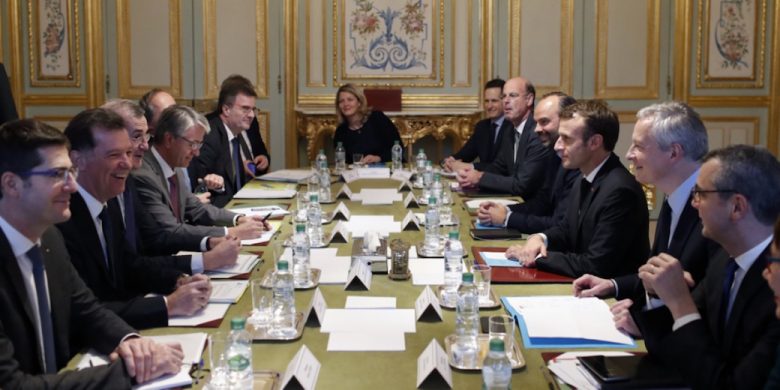 Photo: AP France’s President Emmanuel Macron (right) attends a meeting with the representatives of the banking sector at the Elysee Palace, in Paris, Dec 11

This article argues that the revolt in France “shows how powerful a threat the left are to the EU elite, which is why their apologists are doing everything to avert a general election in Britain”

O wad some Pow’r the giftie gie us
To see oursels as ithers see us!
It wad frae mony a blunder free us,
An’ foolish notion”

First, on reading a plea from social democratic MEPs to Labour leader Jeremy Corbyn. It was to abandon the party’s manifesto commitment, spurn the result of the 2016 referendum and embrace the Europe policy of the Liberal Democrats.

The letter was headed by former Greek prime minister George Papandreou. It was both part of a coordinated push to turn Theresa May’s Brexit crisis into Corbyn’s and Labour’s and also a reply to his speech in Lisbon last week to European social democratic parties.

That was warmly received not only by a surprisingly large number of delegates from parties ailing due to their leaderships’ continued embrace of Blairite dogma but more widely among many activists ranging from the German SPD to the Spanish PSOE.

The contrast with the hope offered by Corbyn in defying the European trend of tanking levels of support for the centre left is summed up in Papandreou’s name leading the signatories of the counter-attack.

He and whoever masterminded this wheeze show all the lack of self-awareness Burns ridiculed in his poem — To a Louse.
George Papandreou inherited the leadership of the once electorally dominant party Pasok — founded by his father — ran it down to single figures in the polls, split from it and now … neither Pasok nor his split exists.

Thus he brought an end to the influence of what had been one of the most powerful political dynasties in post-war Greek history. A political car crash like Ted Kennedy’s on the Chappaquiddick Bridge.

You could almost hear little George’s formidable mother at the Papandreou villa scolding: “Georgaki, your papa gave you that family heirloom and you’ve smashed it to pieces.”

Being lectured on political strategy by George Papandreou is like taking lessons on humility from Bourbon French president Emmanuel Macron or on integrity from foghorn Tory MP Anna Soubry.

The words of To a Louse sprang to mind again as she toured the TV studios this week.

Corbyn is a disgrace, bellowed the serial non-rebel Tory, for not tabling a no-confidence motion in the government on which … she would vote with the government.

SNP leader Nicola Sturgeon inadvertently clarified this apparent paradox on Tuesday morning. She let slip that the real reason for this manufactured demand on Corbyn was not to topple the government but to change Labour’s Brexit strategy of building pressure on Theresa May and campaigning for a general election.

Soubry, Sturgeon and the usual Blairite suspects on the Labour benches wanted a no confidence vote yesterday that they knew would fail badly — at this stage, in days or weeks it can be different — so they could then say there was no option other than to have a second referendum.

So not in order to no confidence the Tories, then, but to sap confidence in the Labour leadership.

The cynicism would be breathtaking — until you realise that the puppeteers behind this are Alastair “dodgy dossier” Campbell and former Blair spin doctor and EU commissioner Peter Mandelson, who has said: “I try to undermine Jeremy Corbyn every single day.”
That’s the thread running through a host of interventions — and there will be more — from the man who broke Pasok to the agent provocateur who calls for others to rebel so she can help shoot the radical leaders.

Perhaps the greatest cynicism is that this operation aimed at avoiding a general election — thus keeping the Tories in for another four years — is dressed up in language purporting European solidarity.

There are two areas missing from the myopic Westminster debate on the Brexit crisis — the suffering of working people in Britain and what is in fact happening across continental Europe, including to ordinary people there.

Single-mindedly organising, agitating and arguing to drive the Tories out and to put a Corbyn-led government in — which means a general election — is not only about securing the only governmental option that will seek to address the hardship of working class Britain.

It is also the single biggest act of real solidarity with ordinary people and labour movements in Europe that any progressive person in Britain could strive for.

It is the “European” thing to do.

Look at France. So much of the liberal and conservative media would rather not. The Yellow Vests revolt has shaken to the core Macron, who only last year was being lionised as the liberal capitalist saviour of an entire continent.

The conservative London Times ran the ludicrous story that matters have got out of hand in Paris thanks to 200 fake twitter accounts in Moscow fuelling unrest. That’s now been taken up by liberal media and even by the French state.

Russia is to liberals as Soros is to the fascist right — a conspiracy to avoid facing reality. They are losing the plot faster than a Proust novel.

On Monday night, Macron addressed the French nation from the magnificence of the Elysee Palace framed, as Macbeth, in “giant’s robes upon a dwarfish thief.”

His concessions were quickly met with “too little, too late” from Yellow Vests protesters and radical left figures such as Jean-Luc Melenchon.

He predicted an “Act V” — a fifth week of road blockades and militant protests, despite the extreme brutality of the French police against half a million people last week, including the sickening image of 150 school students held in stress positions and humiliated.

Eminent French historians are making astute comparisons with previous uprisings — from the sans culottes in 1789 to the provincial artisans in 1848.

From both conservatives and liberals comes the effort to brand it a reactionary movement, like the shopkeepers anti-tax revolt led by the anti-leftist Pierre Poujade in the 1950s.

But this has already gone way beyond the issue of fuel taxation — and tax revolts, in any case, triggered the Indian, Turkish and Iranian progressive national revolutions a century ago.

While starting in the smaller towns, it is has spread. And in all its amorphousness, interviews with participants name firefighters, teachers, agricultural workers, hairdressers, precarious workers of all kinds and many other working class occupations.

It is a predominantly working class revolt of not so much the “left behind” but the driven down.

Naturally, there are all sorts of political ideas and trends, but the influence of Marine Le Pen’s fascists has been vastly exaggerated, as all honest accounts of the movement show.

Macron — and with him the EU and European elites, including Britain’s — have the greatest interest in claiming that it is either they or anarchy inclined to reactionary or fascist violence.

That is not the picture. Indeed, Macron has conceded an increase in the state subsidy to the minimum wage — something Le Pen opposes in the name of super-exploitative small employers.
Imagine, now, what the picture would look like if in the coming weeks and months Britain’s Tories were forced out and a left-led Labour government came to office.

The more politically engaged labour movement activists in Europe might have heard Corbyn’s call in Lisbon to rupture with the failed model of neoliberalism and the political choice of austerity. It’s doubtful that many of those rising up in France did.

They would much more likely hear a prime minister Corbyn, leading a government that moved quickly to implement at least initial measures to break from the old rigged system hitting the working and much of the middle class.

All with the strong internationalist and anti-racist message Corbyn put in Lisbon.

The impact would go far beyond France. It would mean an altogether different negotiation with the EU mandarins if a British Labour government were conducting it and rallying to its side trade unionists, social movements and working people in European states, many of which are in crises not so very different from the broken political system in Britain.

The inspiration of a left-led government in Britain would be hugely greater than that of Syriza when first elected in the much smaller country of Greece in January 2015.

Syriza’s failure should also sound a caution. Avoiding a repeat means a systematic effort to build social struggle and political action outside parliament, something Syriza failed to do.
In any case, it is that action now which is the only way to break the Westminster logjam and offset the efforts there to rescue the government and hamstring Labour as a radical force.

The strategy of May and of her supposed opponents in the EU negotiating team is clear. Having taken a dead cat off the table on Monday, she plans to come up with some cosmetic changes and present a dead parrot as an improvement in the coming weeks.
Meanwhile, every effort will be made to confine this crisis to Westminster in the hope of putting the Labour leadership in a vice applied from both benches.

Breaking out of that means political Corbynism fusing with the spirit of French social revolt in the communities, workplaces and streets of working class Britain.

The other side have a plan and it would be foolish to underestimate it.

But as Burns also wrote: