Who owns agricultural land in Ukraine?

By Elizabeth Fraser, The Oakland Institute, May 8, 2015

The fate of Ukraine’s agricultural sector is on shaky ground. Last year, the Oakland Institute reported that over 1.6 million hectares (ha) of land in Ukraine are now under the control of foreign-based corporations. Further research has allowed for the identification of additional foreign investments. Some estimates now bring the total of Ukrainian farmland controlled by foreign companies to over 2.2 million ha;[1] however, research has also identified important grey areas around land tenure in the country, and who actually controls land in Ukraine today is difficult to ascertain. 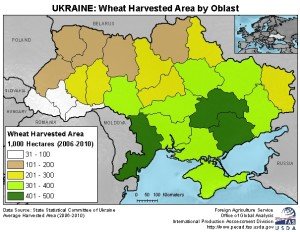 The United Farmers Holding Company, which is owned by a group of Saudi Arabian investors, controls some 33,000 ha of Ukrainian farmland through Continental Farmers Group PLC.

AgroGeneration, which holds 120,000 ha of Ukrainian farmland, is incorporated in France, with over 62 percent of its shares managed by SigmaBleyzer, a Texas-based investment company.

US pension fund NCH Capital holds 450,000 ha. The company began in 1993 and boasts being some of the earliest western investors in Ukraine after the break-up of the Soviet Union. Over the past decade, the company has systematically leased out small parcels of agricultural land (around two to six hectares in size) across Ukraine, aggregating these into large-scale farms that now operate industrially. According to NCH Capital’s General Partner, George Rohr, the leases give the company the right to buy the currently-leased farmland once the moratorium on the sale of land in Ukraine is lifted.

Another subset of companies have Ukrainian leadership, often a mix of domestic and foreign investment, and may be incorporated in tax havens like Cyprus, Austria, and Luxembourg. Some of them are also led by Ukrainian oligarchs. For instance, UkrLandFarming controls the country’s largest land-bank, totalling 654,000 ha of land. 95 percent of the shares of UkrLandFarming are owned by multi-millionaire Oleg Bakhmatyuk with the remaining five percent having been recently sold to Cargill.  Similarly, Yuriy Kosiuk, Ukraine’s fifth richest man, is the CEO of MHP, one of the country’s largest agricultural companies, which holds over 360,000 ha of farmland.

With the onset of the political crisis, several of these mostly Ukrainian-based companies have descended into crisis themselves. One example is Cyprus-incorporated Mriya Agro Holding, which holds a land-bank of close to 300,000 ha. In 2014, the company’s website (which is no longer available online) indicated that 80 percent of the shares of Mriya Agro Holding are/were owned by the Guta family (Ukrainian), who hold primary leadership positions in the company. The remaining 20 percent are/were listed on the Frankfurt Stock Exchange.

According to news sources, in summer 2014 the company defaulted on its payments for two large Eurobonds, putting its future into question. The company first enlisted the support of US-based Blackstone Group and Ukrainian-based Dragon Capital, both of whom withdrew support after only one month; and later, the international auditing and financial service firm, Deloitte. An international bondholder committee was struck, comprised of several US and UK-based investment groups (including CarVal Investors – Cargill’s investment arm), which together own over 50 percent of the debt owed on Mriya’s 2018 Eurobonds and 15 percent of the 2016 Eurobonds. The future of this firm is unclear with some sources suggesting a risk of bankruptcy.

Other Ukrainian-owned companies incorporated in tax havens are also experiencing difficulties. Sintal Agriculture Public Ltd (based in Cyprus, traded on the Frankfurt Stock Exchange as of 2008, and holding almost 150,000 ha of land) ceased trading in shares on January 29, 2014 “until further notice” after bankruptcy proceedings were initiated against the company. In 2013, its website (now also defunct) indicated that 36.3 percent of the company was free floating shares.

The potential bankruptcy of these corporations, and the involvement of Western investors in the crisis management, raises questions about the fate of the agricultural land they hold. At this time, it is not clear how control over the agricultural lands in question will be addressed and what the role of foreign companies and funds who have invested in these companies will be. However, if things progress in a similar way to neighboring Romania, foreign control of this land could transpire.

Romania has a similar story of dissolving collectivized farms, giving land titles to collective farm workers, and imposing a moratorium on the sale of agricultural land. Loopholes in the country’s national legislation have created opportunities for foreign control of land via bankruptcy proceedings. As documented by Judith Bouniol, the bankruptcy of national agribusinesses has provided a gateway for foreign control of Romania’s farmland.

It is far from clear if the same scenario could take place in Ukraine. However, this lesson from Romania emphasizes the importance of keeping close watch on these agricultural land deals. In addition, the murky situation around land ownership in Ukraine raises many questions. Perhaps the most important is whether the growing concentration of Ukrainian land in the hands of a few oligarchs and foreign corporations can benefit the country, its people, and its economy.

Notes:
[1] Two land investment databases were accessed over the past year: the Land Matrix accessed in July 2014 and April 2015, and GRAIN’s 2012 data set on land investments worldwide. Taken individually, these databases suggest foreign land acquisitions of between 997,000 ha to 1.7M ha. When consolidated, individual deals reported by these databases represent over 2.2M ha of land in Ukraine.

The Oakland Institute published two studies in 2014: The IMF and World Bank open up Ukraine to Western interests, June 2014, and  The corporate takeover of Ukrainian agriculture, Dec. 2014, each eight pages. Additional reports on Ukraine have followed.