Who is stalling the OPCW investigation in Douma? 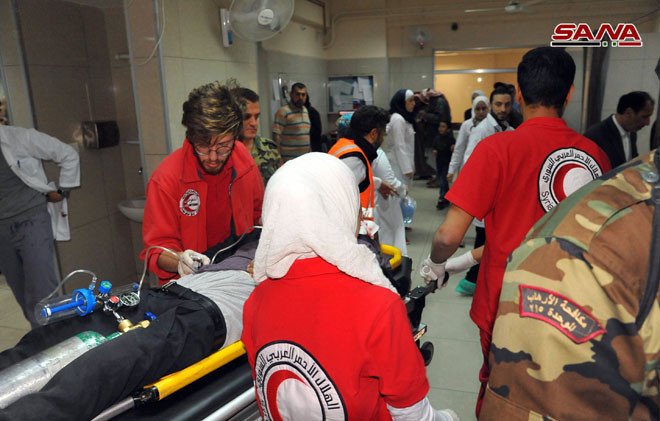 Red Crescent (Syria’s main health organization established 1942) tending to victims of a terrorist attack. Published by the Guardian with the caption “Medics take a wounded man into hospital in Damascus after rockets were fired in Douma on 7 April.”

How can we get to the bottom of what happened in Douma just before the April 14th missile strike? Two prerequisites are not being met: the OPCW, the body responsible for overseeing the prohibition of chemical weapons, should be allowed to do its job. And the press should objectively report the investigation. So  far, neither is happening.

Why has the fact finding mission (FFM)of the Organisation for the Prohibition of Chemical Weapons (OPCW) not visited Douma? The OPCW inspectors are held up by the United Nations Department of Safety and Security (UNDSS) which has a say about any movement of UN aligned organizations in areas that might be dangerous. The UNDSS is led by an Australian police / intelligence officer. The holdup seems to be intended.

On Sunday April 8 videos were published of an alleged ‘chemical attack’ in Douma near Damascus. At that time the area was under control of Jaish al-Islam, a Salafi terrorist organization financed by Saudi Arabia. The various videos from terrorist supporters like the ‘White Helmets’ were unconvincing. They showed obviously arranged scenes of an alleged ‘barrel bomb’ and manipulated bodies of dead children that had been moved and decorated with shaving foam to superficially fit the claims of a ‘chemical incident’. Another video showed people in a hospital being doused with water for no apparent reason.

An often quoted opposition news outlet, the Syrian Observatory in Britain, denied that a ‘chemical attack’ had happened. It reported on April 8 of suffocation after a shelter collapsed due to bombing:

[I]n among the casualties there are 21 civilians including 9 children and 3 women were killed as a result of suffocation caused by the shelling which destroyed basements of houses as a result of the violence bombardment that stopped about an hour ago on Douma area.

The ‘chemical incident’ was likely faked. It suspiciously happened just a few days after U.S. President Trump had announced the he wanted the U.S. military to leave Syria. A year earlier a similar incident was claimed to have happened after a similar announcement by Trump. The U.S. had responded to the 2017 incident by bombing an empty Syrian airfield.

Russian military police immediately entered the area and investigated the house where, allegedly, people were killed by ‘chemical weapons’. They found no evidence that such an event had taken place. The Syrian government asked the Organisation for the Prohibition of Chemical aWeapons (OPCW) to investigate the case.

Many international news teams have since visited the area where the incident allegedly took place. The also visited the field hospital shown in one of the opposition videos. Doctors at that hospital deny (vid) that any patient of theirs had been affected by a chemical attack. The cases they had seen had breathing difficulties caused by the inhalation of dust thrown up through exploding bombs and artillery. Alleged ‘victims’ shown in the hospital video claim (vid) they were paid to perform.

The regime-change shills are denying that any claims of the hospital staff working in the now government controlled Douma could be true. Medics are liars, unless they are controlled by Jihadis. See for example this shoddy propaganda piece by the Guardian: Syrian medics ‘subjected to extreme intimidation’ after Douma attack by Martin Chulov in Beirut and Kareem Shaheen in Istanbul. 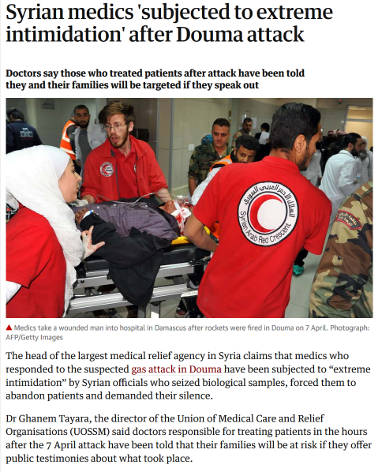 The head of the largest medical relief agency in Syria claims that medics who responded to the suspected gas attack in Douma have been subjected to “extreme intimidation” by Syrian officials who seized biological samples, forced them to abandon patients and demanded their silence.

Now look at the picture. It shows Syrian Red Crescent personnel. The caption is false. It says: “Medics take a wounded man into hospital in Damascus after rockets were fired in Douma on 7 April.” The picture is actually from a series published by the Syrian news agency SANA.

The SANA series is headlined: “Injuries among civilians in Jaish al-Islam mortar attacks on Damascus”. The attack was FROM the terrorists in Douma on civilians in Damascus, not IN Douma as the Guardian insinuates. The pictured Red Crescent in Syria, founded in 1942, has 1,592 staff and some 6,000 volunteers. It is indeed the “the largest medical relief agency in Syria”. But it is not the one the Guardian describes and quotes:

Dr Ghanem Tayara, the director of the Union of Medical Care and Relief Organisations (UOSSM) said doctors responsible for treating patients in the hours after the 7 April attack have been told that their families will be at risk if they offer public testimonies about what took place.

The Union of Medical Care and Relief Organizations was founded in 2012, works from Reyhanli in Turkey and claims to have 600 staff. It consists of the Syrian American Medial Society (SAMS), which is funded by the CIA front USAID and lobbies for regime change in Syria, the British-Syrian Medical Society which only works in ‘rebel’ held areas, as well as British and U.S. p.o.-box ‘charities’ which collect donations. SAMS and UOSSM are said to be Muslim Brotherhood fronts.

The Guardian shows a Syrian Red Crescent/Red Cross picture in the context of ridiculous claims made by an organization on the side of the Jihadis. The Syrian Red Crescent has no relation to that organization. UOSSM is misidentified as the largest relief organization in Syria. Its claims are repeated without doubts by Guardian ‘journalists’ in Turkey and Lebanon to counter interviews and observations made by real journalists on the ground in Douma. The piece and its presentation is bottom fishing by a once reasonable paper. Jonathan Cook has more to say about that shoddy Guardian piece.

On Friday April 13 the OPCW fact finding mission arrived in Damascus. On Saturday France, the U.K and the United States, (FUKUS), bombed an agricultural and medical research center in Damascus as well as two Syrian army depots. The attack missed its other targets, a failure the U.S. military attempts to cover up. The attack came despite doubts in the Pentagon and elsewhere about what actually happened. High ranking British military generals have publicly doubted the claims of a Syrian ‘chemical attack’.

The suburb where the alleged incident happened is only a few miles away from the center of Damascus. Journalists and camera teams walk all over the place without any protection and freely interview hospital personal. The OPCW has yet to reach the area. It claims that the security is insufficient.

Yesterday the Director General of the OPCW Ahmet Üzümcü, a Turkish career diplomat who was earlier Turkey’s Permanent Representative to NATO, issued a statement:

On 16 April, we received confirmation from the National Authority of the Syrian Arab Republic that, under agreements reached to allow the evacuation of the population in Ghouta, the Syrian military were unable to enter Douma. The security for the sites where the FFM plans to deploy was under the control of the Russian Military Police. The United Nations Department of Safety and Security (UNDSS) has made the necessary arrangements with the Syrian authorities to escort the team to a certain point and then for the escort to be taken over by the Russian Military Police. However, the UNDSS preferred to first conduct a reconnaissance visit to the sites, which took place yesterday. FFM team members did not participate in this visit.

Note: Only about 10% of the population of the Ghouta area to which Douma belongs, the terrorist and their families, were evacuated. Other people have stayed or returned to the now liberated areas.

No other organization reported of recent shots or explosions in Douma. Even the New York Times, a staunch defender of the ‘opposition’ in Syria, wonders about the hold-up but does not bother to answer the question:

[T]he fact that journalists had been able to wander around Douma unmolested raised questions about why it was not deemed safe enough for the investigators to visit.

Why were, allegedly, shots fired at the UN Security team but not on anyone else visiting the area?

If, as the terrorist supporters claim, Chlorine was used in the ‘chemical attack’, the OSCE investigators are unlikely to find any physical evidence of it. Chlorine dissipates and leaves no unique traces in the dead body. Interviews with local witnesses though could be of value.

One gets the impression that certain circles fear the the OPCW could reach the area, talk to witnesses and confirm the claims made by doctors in the hospital as well as by many journalists that no ‘chemical attack’ took place. It would expose the attack on Syria as a reckless and unjustified war crime.

The leader of the UNDSS is an Australian police commander:

Mr. Drennan, who from 2009 served as Deputy Commissioner National Security with the Australian Federal Police, brings to the position an extensive career in policing and law enforcement at the community, national and international levels.

Is it possible that a distinguished Australian police commander delays or prevents the OPCW investigation to protect the British and U.S. allies?