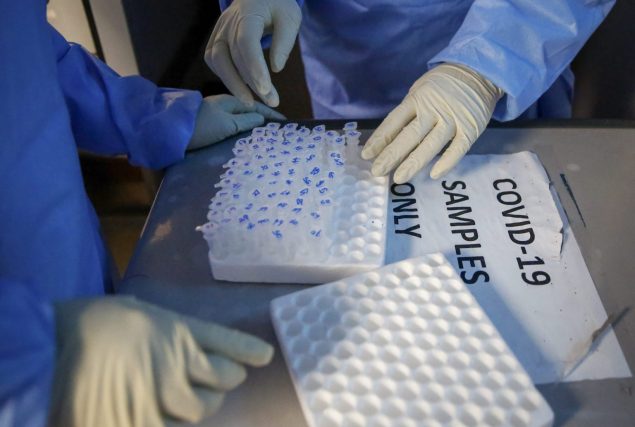 Laboratory technicians handle patient samples to be tested for the new coronavirus on Sunday in Nairobi, Kenya. (AP Photo/Brian Inganga)

The head of the World Health Organization on Monday blasted as racist comments two French doctors made on television suggesting tests for a Covid-19 vaccine should be conducted on Africans because Africa will be less capable of protecting people against coronavirus.

The head of the World Health Organization on Monday blasted as racist comments two French doctors made on television suggesting tests for a Covid-19 vaccine should be conducted on Africans because Africa will be less capable of protecting people against coronavirus.

Dr. Tedros Adhanom Ghebreyesus, the WHO director-general and a native of Eritrea, said he was appalled when he heard about the doctors’ comments about making Africa a testing ground for a vaccine.

“I was so appalled,” Tedros said during an online news conference. “These kind of racist remarks do not help” build cooperation around the globe to fight the pandemic, he said.

The WHO chief lashed out after an African-based reporter brought the subject up and said Africans were worried about being used for vaccine tests.

“Africa cannot, will not, be any testing ground for any vaccine,” Tedros said without referring to the French doctors specifically. He said the comments were a “hangover from colonial mentality” that must stop.

“It was appalling to hear in the 21st century that kind of remark,” Tedros said.

He said vaccine testing conducted under the auspices of the WHO will be done properly and follow the same protocol wherever it is done. The WHO is helping lead efforts to find medical treatments and vaccines against Covid-19.

He added that once a vaccine against Covid-19 is developed, it must be distributed around the world in an equitable manner.

“Solidarity is very important here,” Tedros said. “When a vaccine is ready, we should be able to deliver it all over the world” at the same time.

The row started last week when two French doctors said trials to see if a tuberculosis vaccine could be effective in treating Covid-19 should be tested on Africans.

“It may be provocative. Shouldn’t we do this study in Africa, where there are no masks, no treatment, no resuscitation, a bit like some studies on AIDS, where among prostitutes, we try things, because they are exposed, and they don’t protect themselves. What do you think?” said Jean-Paul Mira, head of the intensive care unit at the Cochin Hospital in Paris.

“You are right. We’re thinking in parallel to a study in Africa precisely to make this same type of approach. I think there is a call for tenders that was released or that will be released,” said Camille Locht, research director at the French Institute of Health and Medical Research, Inserm, in response.

The doctors were talking about expanding into Africa trials to use the BCG tuberculosis vaccine as an antidote to the disease caused by the novel coronavirus that has brought half the world to a standstill. The discussion took place last Wednesday on LCI, a French television channel.

The two doctors were quickly denounced for racism.

“Africa isn’t a testing lab,” Didier Drogba, a former Ivorian soccer star, said on Twitter. “I would like to vividly denounce those demeaning, false and most of all deeply racists words.”

SOS Racisme, a French anti-racism group, condemned the remarks too.

“No, Africans aren’t guinea pigs,” the group said in a statement.

Inserm defended Locht, its research director, claiming the doctor’s comments had been taken out of context and become “the subject of erroneous interpretation.”

Mira, the head of the intensive care unit at the Cochin Hospital, apologized for his comments.

“I want to present all my apologies to those who were hurt, shocked and felt insulted by the remarks that I clumsily expressed on LCI this week,” he said in a statement.

Mira said in an interview with Huffington Post that Africa may be exposed to more serious “forms of harm because there will be so few masks and little confinement” because of how its societies are structured.

Jean-Jacques Muyembe, the chief of the national biological research institute for the Democratic Republic of the Congo, said his country has been chosen to conduct vaccine tests. Muyembe has helped lead successful efforts to combat the Ebola epidemic.

“The only way to control [the coronavirus] will be a vaccine, just like Ebola. It was a vaccine that helped us end the Ebola epidemic,” Muyembe said, according to AFP, the French news agency.

Africa is the continent where the fewest number of covoronavirus cases have been reported, but WHO is worried that it will spread quickly there and cause massive suffering and death on a continent with weak medical systems, dire poverty, overcrowded slums and several armed conflicts.