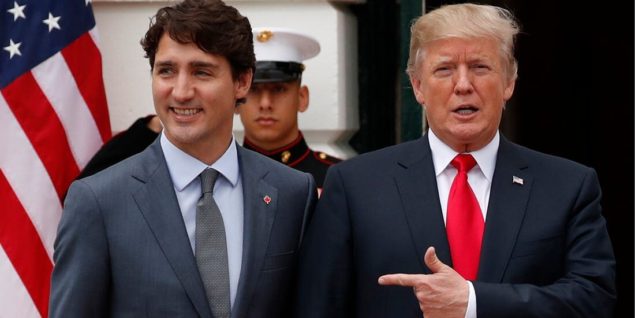 While the Trudeau government claims that it favours a “peaceful solution” for Venezuela, it did not condemn the U.S.-led, May, 2020 maritime/military invasion. However, in the context of the Trudeau government’s support for Trump’s regime change policy in Venezuela by any means necessary, and its leading role through the Lima Group, the Canadian Prime Minister’s silence means acquiescence.

In an official Venezuelan publication released this week, several tweets by the Venezuelan Ambassador to the United Nations, veteran diplomat Samuel Moncada, were published. The following are my translations. They are directed toward the Canadian government and Canadian press for their consideration.

“Trump is beginning a higher phase of aggression against Venezuela. The ‘maximum pressure’ campaign goes beyond economic terrorism and moves on to the military dimension. They are looking for an ‘October surprise’ for their elections [November 4 Presidential]. In Venezuela, we must prepare for looming provocation.”

“Trump knows that the invasion of Venezuela must be indirect, using the Colombian army as disposable labor. A ‘multinational stabilization force for the transition’ is the term used in the propaganda [according to] Admiral Faller [Craig Faller, commander of U.S. Southern Command], speaking as head of the invasion force.”

“War propaganda in the United States affirms that its objective is democracy in Venezuela. The truth is more sinister and deadly: eliminating President Maduro following the invasion of Venezuela to destroy the patriotic military and political forces. Venezuela will be converted into a colony.”

“Senator Menéndez [Democratic Party Ranking Member of the U.S. Senate Foreign Relations Committee] has already announced that Venezuela should be invaded by multinational forces after the transition because it is a dangerous ‘space without government’ for the U.S. The problem is not Maduro, the problem is Venezuela, which must be reduced by military force.”

“The agent of the U.S. intelligence services for the invasion, Iván Simonovis, publicly calls for a multinational attack on Venezuela, using the excuse of Colombia [narco traffic] and Washington’s propaganda organs. They are desperate because they think the opportunity is slipping away.”

Even the Washington Examiner confirms that a multinational military invasion is being planned:

“The center of gravity for the Maduro regime’s illicit activities are Cuba, Russia, increasingly Iran,” Faller [U.S. Southern Command’s Adm. Craig Faller] said on an Atlantic Council virtual discussion Thursday [August 16, 2020], describing activities that include illegal gold mining and sanctions evasion….In April, President Trump authorized Faller to initiate an enhanced counter narcotics effort across the Caribbean and eastern Pacific…. In a future, multinational effort to stabilize Venezuela, Gunson said while U.S. military forces are unwelcome, SOUTHCOM has much to offer a transitional government. Philip Gunson is a reporter from Caracas for the International Crisis Group.

Now let us piece a few points together. Is the U.S. government’s ‘October election surprise’ serious? On August 18, President Trump said that Biden “…would lead to the U.S. becoming a ‘large-scale Venezuela…’” Food for thought.

However, this would not be the first time that a military invasion was attempted using proxy states such as Colombia.

“On 3 May, Venezuelan officials announced that security forces had captured several speedboats and some of those onboard near the coastal city of La Guaira. Believed to have originated in neighbouring Colombia, the government initially said that eight of the participants had been killed, although reports later revised the number to six. Over a dozen more alleged perpetrators were captured, including two former U.S. ‘Special Operations’ soldiers.”

The masterminds include two former U.S. Special Green Berets captured in Venezuela. A third, a Canadian-American Jordan Goudreau based in Florida, is a former U.S. Green Beret who runs Silvercorp USA, a Florida-based private security firm. He has very close ties to Trump.

Even the Washington Post had to admit that “Maduro had a point” when he accused the U.S. of being behind the foiled May military maritime invasion: “… — as footage on social media appeared to show a number of apprehended insurrectionists, including two former U.S. Special Operations soldiers — Maduro may have a point.”

While the Trudeau government claims that it favours a “peaceful solution” for Venezuela, it did not condemn the U.S.-led, May, 2020 maritime/military invasion. However, in the context of the Trudeau government’s support for Trump’s regime change policy in Venezuela by any means necessary, and its leading role through the Lima Group, the Canadian Prime Minister’s silence means acquiescence.

Moreover, since then, the Trudeau government suffered a June 17 defeat in its bid for a United Nations Security Council seat. One of the main reasons for this loss is the Trudeau government being seen by many in lock step with Trump’s foreign policy. A second major reason is clearly Ottawa’s flaunting of the United Nations Charter and its and OAS principles of non-interference in the internal affairs of other countries, such as Venezuela, whose president, Nicolás Maduro, is recognized by the U.N.

The online conference on Thursday August 20 at 5 PM (Montreal Canada Eastern Daylight time) featuring Venezuelan Foreign Minister Jorge Arreaza has turned into a major public forum beyond our expectations. Some mainstream media are attending. I am now asking Prime Minister Trudeau to register a representative for the Conference. Please explain to the public what Canada’s stance is on the current military threat against Venezuela and why Canada remained silent on the aborted military adventure in May, which has come to be known (by friends and foes alike) as the ‘Bay of Piglets.’ In fact, the entire Canadian Venezuela policy has to be reset.

This is an opportunity to discuss with Venezuela’s Foreign Minister. In order to prevent possible further violence and bloodshed in Venezuela and indeed the region, should this opportunity for dialogue not be considered, instead of dragging Canada further into the muddy swamp of Trump’s reckless foreign policy? can register for the webinar here.